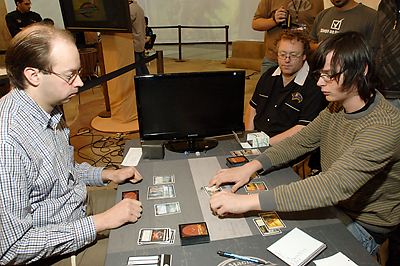 Bram Snepvangers and Marijn Lybaert face off in a Low Countries showdown.Belgium’s Marijn Lybaert and the Netherlands’ Bram Snepvangers had barely a night’s sleep before they faced each other for a rematch. Extended had begun, and these two competitors were looking to defend their spot in the Top 2 at 11-1. Snepvangers was looking to cement his bid for Top 8 as 1st in the standings—he required an even 2-2-2 record in Extended matches—and Lybaert hoped to reverse his luck from the end of draft day, when he dropped his first match to Snepvangers.

“Can we take our draft decks again?” Lybaert asked. “I’d love to!”

Lybaert chose to play, but both players opted to mulligan and search for better openers. Lybaert’s next six were reasonable. Snepvangers calmly shuffled and went down to five.

“He’s mulliganed more in this match than the entire rest of the tournament!” exclaimed Lybaert.

Lybaert led with an Arid Mesa. The Belgian was playing a version of the Naya midrange deck with Punishing Fire popularized by PT–Austin winner Brian Kibler. Snepvangers was running a blue-black Dark Depths deck featuring a host of tutor targets and disruption in addition to its namesake combo piece.

Snepvangers decided to see what was what with a turn-one Thoughtseize off of River of Tears. Lybaert revealed Qasali Pridemage, Punishing Fire, Grove of the Burnwillows, Ghost Quarter, and Temple Garden. He took the Pridemage and passed. 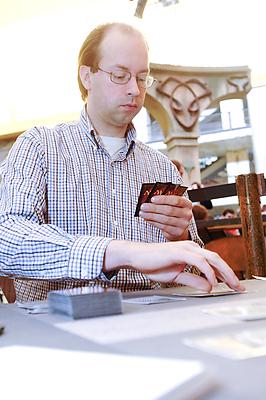 The Hand of SnepvangersThe Belgian player fetched up a Stomping Ground and laid his Ghost Quarter, but had no turn-two play. His Dutch opponent played a tapped Tolaria West and passed it back, prompting Lybaert to aim the Punishing Fire at the dome. The life totals were 20-16, advantage Lybaert.

Marijn had another simple turn: Burnwillows, go, leaving the possibility of retrieving Punishing Fire on the table. Bram went a bit darker with Urborg, Tomb of Yawgmoth into Dark Confidant. Marijn would have none of that, returning the Fire and using it to burn up Bram’s Confidant.

On Lybaert’s turn proper, he tossed down a Tarmogoyf and a tapped Temple Garden. The Goyf was 4/5 on lands, instants, sorceries and creatures. When it rumbled into the red zone, Snepvangers had a Repeal to cycle into more action. Lybaert was fine with that, merely recasting the Goyf and finishing his turn.

Snepvangers had no fourth land, but when Lybaert attempted to repeat the Fire dance, the Dutch veteran had Shred Memory in response to empty the Belgian’s graveyard. Tarmogoyf met a Slaughter Pact and was replaced by the holier and perhaps deadlier Baneslayer Angel.

The Angel flew over Bram’s three lands, and the life totals became 24-13 favoring Lybaert. Snepvangers found a fourth land and used half of them to Echoing Truth the Angel, and another one to Thoughtseize it away.

Unfortunately for him, Lybaert had a second copy of both Baneslayer Angel and Punishing Fire in hand. With Snepvangers down to 11 from Thoughtseize’s life loss, Lybaert piled on the Fire via Burnwillows, putting him to an even 10.

Snepvangers sought to Beseech the Queen for answers. Lybaert seemed unconcerned, and crashing in with Baneslayer and his newly played Treetop Village. Bram’s fifth land, a Ghost Quarter, exchanged the Treetop for a Mountain, but still took 5 Angel damage. At a nearly insurmountable 29-5, he scooped. 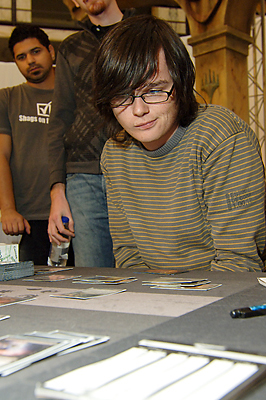 The Smirk of LybaertBoth players kept their openers, but Lybaert had the faster start on the draw with Noble Hierarch off of Grove of the Burnwillows. He laid a depressed 0/1 Tarmogoyf next turn, but grew it to 1 power from Arid Mesa fetching untapped Hallowed Fountain. Meddling Mage came down pre-combat, and when Snepvangers had no response, Lybaert named Damnation.

Tarmogoyf picked up a second exalted power when it attacked, but Bram had the blocker with midcombat Vendilion Clique. He saw Marijn’s hand of Wild Nacatl, Temporal Isolation, Knight of the Reliquary, and Mountain but opted not to switch any out for Marijn’s top card. The two creatures traded and with a postcombat Nacatl off of the Burnwillows, life totals stood at Bram 22, Marijn 17.

Snepvangers kept communications with the Queen open, Beseeching again, while Lybaert continued to fill his side of the table adding Knight of the Reliquary off the Grove, putting Snepvangers to 18 after an attack for 5 with Nacatl and Meddling Mage.

Hoping to staunch the bleeding, the Dutch player used Threads of Disloyalty to steal the tapped Meddling Mage.

Lybaert used his Temporal Isolation to take the Mage out of the fight, and attacked Snepvangers down to 14. In response to the Dutch player’s Duress, he unloaded with Punishing Fire, taking him down to 12. A full attack with the Knight and the Nacatl took him down to 4—not a great place to be against Punishing Fire.

Snepvangers smiled and attacked with Lybaert’s shadowy Meddling Mage for zero damage. On his way across the table with the 2/2, he extended the hand.