At the end of Day One, Spanish player Joel Calafell managed to go undefeated with a unique Turbo Fog deck of his own design. He was squaring off against Brad "FFfreak" Nelson, but the American wasn’t too comfortable with his chances.

"I have zero confidence today," Nelson explained, adding, "Though I did win my first Pro Tour Extended match, a month after the Extended Pro Tour." The comment was a jab at himself over his 0-5 performance during Pro Tour–Austin.

Calafell had to start on a mulligan, but because he was on the draw he’d be getting a little bit of help making up for the card disadvantage. Unfortunately, he looked at his set of six and had to send those back as well.

"That makes us even," Brad opined. "I’m going to need some help to be able to win this game." He got exactly that, as Calafell had to ship his hand of five back as well, going to four.

"It’s okay. I can win on four cards," remarked Calafell.

Nelson hopped right out of the gates with a first-turn Wild Nacatl, then followed it up with Kird Ape. Joel used a Scalding Tarn to find Breeding Pool, then untapped and cast Hedron Crab. After the Crab he played another Scalding Tarn which milled a Golgari Grave-Troll into his graveyard. The Watery Grave he fetched with the Tarn netted him three more cards from the top of his deck, which were a land, Bloodghast, and Dread Return. Calafell was right—he could win on four cards with a start like that!

Nelson untapped and considered his options. What looked like a cakewalk after his opponent started down three cards was now going to be a battle to survive. He attacked with his Wild Nacatl and Kird Ape, dropping Calafell to 10. Postcombat he used Molten Rain to knock out his opponent’s Watery Grave, dropping Joel to 8 in the process.

Despite having a dredge card in his graveyard, Joel Calafell opted to draw a card on his turn, clearly needing something besides a stocked graveyard. Whatever it was, it didn’t seem like he had found it as he didn’t play a land nor cast a spell, instead simply passing the turn. Brad sent his team, but Joel couldn’t afford to block; the only way he was going to dig out of the game after the Molten Rain was by doing something broken with Hedron Crab. He fell to 3, but Brad revealed the Tribal Flames in his hand for lethal, and the two headed to their sideboards. 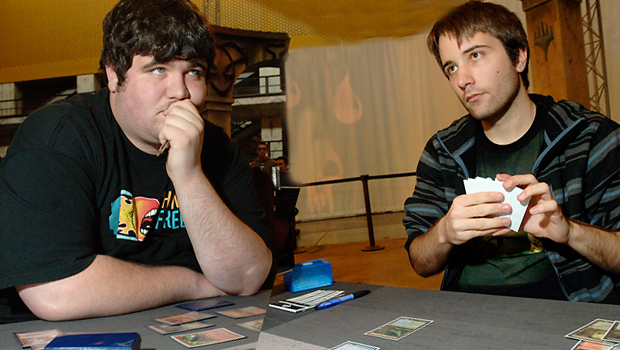 Wild Nacatl was again the first creature to the battlefield in the second game with Brad Nelson casting one on his first turn. Joel didn’t have anything until his second turn at which point he cast Ideas Unbound. At the end of his turn he discarded Golgari Grave-Troll, Bloodghast, and Bridge from Below. The Zoo/Dredge match-up is a classic Extended battle, and the sideboarded games often become a test of whether the Dredge player can correctly deduce which sideboard hate options he or she should prepare for. During Pro Tour–Austin, Ravenous Trap was a very popular choice; unlike Tormod’s Crypt and other permanent-based solutions, the Trap had to be dealt with preemptively, not after it was cast.

When Brad Nelson dropped a Gaddock Teeg on his second turn, shutting off Joel’s Dread Returns, he represented being on a creature anti-Dredge plan. It was a popular choice, opting to play 2/2s like Gaddock Teeg and Meddling Mage to disrupt the opponent, because it had utility in other match-ups and because 2/2s can attack where Ravenous Traps sit in one’s hand. Unfortunately for Joel, he couldn’t actually tell whether his opponent didn’t also have a Ravenous Trap, and was playing with that in mind on top of being unable to cast his Dread Returns thanks to the Teegs.

Wild Nacatl and Gaddock Teeg got into the red zone for the American Nelson while Joel Calafell returned his Bloodghast from the graveyard to the battlefield after playing a land. Jötun Grunt for Nelson joined his Gaddock Teeg as yet another creature-based disruptive element, and to remind himself to pay for cumulative upkeep on the Coldsnap uncommon, Brad placed a six-sided die on top of his library. That put the initiative on Joel Calafell to come up with a solution and he attempted to do just that with an Ideas Unbound. That sorcery allowed him to mill eleven cards from his deck and picked up a free Narcomoeba. He attacked with Bloodghast, then cast Tombstalker for just

. The 5/5 had a commanding board presence, and with the totals at 9-6 in Brad’s favor, the flyer could end the game in just two attacks.

Nelson didn’t let on whether he was surprised to see the creature hit the table. Instead, he cashed in a fetch land to find the black mana he needed for Extirpate, which he used to hit his opponent’s Bridge from Belows. Gaddock Teeg, Jötun Grunt, and the Planar Chaos instant? Poor Joel Calafell was facing more hate than a Red Sox fan in Yankee stadium. When Brad pushed his entire Zoo team to the red zone, Calafell took a minute to figure out his blocks. He had a Tombstalker and a Narcomoeba to work with, but was facing Jötun Grunt, Gaddock Teeg, and a 3/3 Wild Nacatl. After sitting in the tank for a few moments, he opted to put his ‘Stalker in front of the Grunt, Narcomoeba in front of Nacatl, and to take the damage from Teeg, leaving him at 4 life. Post-combat Nelson cast a second copy of Jötun Grunt, replacing the one he had just lost during the attack, then used Lightning Bolt to finish off Joel’s Tombstalker. Finally, a second Extirpate deprived Joel of access to Stinkweed Imp, and he revealed he had three in his hand alongside the copy in his graveyard.

"After this I want you all to tell me what I did wrong," Nelson said, turning to the crowd pressed in to watch his match following the intense turn. The comment, made in passing, was a glowing example of what the world’s best players do to get to the top: learn from their mistakes. Even though he was sitting in the feature match arena playing against Joel Calafell, the American was still willing to admit he made mistakes and to seek help from others to learn from them.

Back in the game, Joel Calafell was trying to figure out how he could possibly get out of the match alive. He drew his card for the turn, the slightest hint of a smile whispering across his face. He tapped two mana, then cast Tombstalker followed by Life From the Loam. He passed the turn with Bloodghast and Tombstalker untapped (though the ‘Ghast couldn’t block), but it was a bluff. When Brad remembered to pay his cumulative upkeep on Jötun Grunt, Joel conceded.

4 Golgari Grave-Troll 2 Life from the Loam