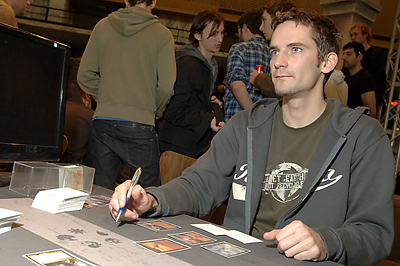 As the Extended day moves inexorably toward our Top 8, talk has shifted from what decks are good or bad, to who will be playing tomorrow, for a chance at being the World Champion. With each advancing round, a smaller portion of the field is in contention, as dreams are dashed or kept alive with each game won or lost.

Andre Coimbra and Petr Brozek are within just a few wins of locking up their top 8 spot, and sat at the top of the standings, have a little more leeway for bumps in the road than most.

Brozek won the roll, and following a mulligan, led with a Mountain and Mogg Fanatic. He had a second Goblin the following turn along with a Darksteel Citadel, while Coimbra began with Misty Rainforest into a Stomping Ground but held back on spells.

A Teetering Peaks threatened to make one Mogg Fanatic big, but a Path to Exile stopped that damage coming in. Brozek chose to sacrifice the goblin for damage rather than getting to search for a land. Coimbra had a Knight of the Reliquary, but lost a land to Molten Rain from Brozek, who had quickly reduced Coimbra from 20 to 10. Against a burn deck like Brozek’s fetch lands were not ideal, as life became a precious commodity. Brozek’s hand was down to just one card, but given the amount of direct damage in his deck, that would prove little consolation to Coimbra.

Andre attacked with Knight of the Reliquary, which was a 5/5. Brozek attacked back with Mogg Fanatic, and played Keldon Marauders, taking Coimbra to 8. This soon became 7 as he cracked a fetch land to get up to three mana at the end of Brozek’s turn. A Lightning Helix on Keldon Marauders took Coimbra to 9 (after Keldon Marauders had done its thing). Coimbra then passed with his Knight untapped.

Brozek did not have much on his turn, simply passing back and watching on as the knight upgraded a Plains into Temple Garden for Coimbra. The Knight swung the next turn, taking Brozek to 8. For the first time in the match, Coimbra was ahead in the damage race.

A Shrapnel Blast from Brozek was met with Bant Charm from Coimbra, who counterattacked with Knight of the Reliquary, and had a Lightning Bolt to end things.

Petr’s choice of burn for Extended was an interesting one. There were a few players who, based on their record in the other formats, knew they would only have to win a few matches to secure their place in the Top 8, which would use Standard decks. With this in mind, some players, including Brozek it would seem, chose decks that have quite high variance, but that can simply “just win” in spite of what opponents are doing. This is the sort of strategy that only really applies at Worlds, but it is certainly worthy of note. 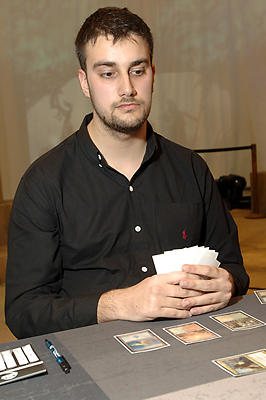 Andre Coimbra’s Zoo deck features Bant CharmFor Game 2, it was Coimbra’s turn to mulligan his opener. He faced a turn-one Goblin Guide, which got in for 2 and revealed a Bant Charm on the top of his deck.

Coimbra played a Temple Garden into Noble Hierarch, soon showing that he did not have a second land as he missed land drop number two. This was super bad for Coimbra, as Goblin Guide was revealing every card he was drawing, and he couldn’t get a Noble Hierarch to stick for his second source of mana.

When Coimbra eventually started drawing lands, his life total as already in single digits. More concerningly, Brozek still had three cards in hand and four land on the battlefield. Coimbra crawled back with a Lightning Helix on Goblin Guide in the end, but by this point much of the damage had been done.

Coimbra followed up with pair of copies of Wild Nacatl. Brozek simply sat back and waited for the right time. Coimbra tried to force things with a third Wild Nacatl, which made for some big swings. Suddenly it seemed that Brozek was stuck. He didn’t have much in the way of spells for a few turns, while Cats knocked him down to single digits. Brozek was able to kill one off, but following a series of lands off the top, the Czech player was left dead to the Cat attack.