Tomoharu Saito’s struggle to catch Yuuya Watanabe for Player of the Year accelerated into its final stretch in the fourth round of Extended play. Standing in his way: 2006 World Champion Makihito Mihara. Both were in close contention for Top 8 and playing to stay alive.

Saito led with a Temple Garden and a Noble Hierarch, going to 18. Mihara Pondered what to do on his turn. He reordered the three cards, drew the top one, and passed the turn.

Saito played an Arid Mesa and broke it for a Steam Vents, going down to 15 in pursuit of perfect mana. He dropped a Knight of the Reliquary off the two Ravnica block duals and his Hierarch. Mihara’s turn was a bit more straightforward – he played a Forest and then a Sakura Tribe-Elder.

Saito had a Treetop Village and another Knight of the Reliquary, and rather than make a futile attack into the Tribe-Elder, he passed it back to Mihara. Mihara had another copy of the land-fetching Snake and capped his turn with Valakut, the Molten Pinnacle.

On Mihara’s end step, Saito used his active Knight to fetch a Misty Rainforest and then a Temple Garden off of his sacrificed Temple Garden. His now 5/5 Knights were threatening enough that Mihara opted not to sacrifice his Elders until the last moment, saving them as roadblocks for the ever growing Bant Knights. Despite being the clear aggressor in this matchup, Saito was the one down to 13 due to all of the fetchland activations.

One of the two Knights smashed into one of the Elders, ramping Mihara up to four lands. With Mihara still at 20 and himself at 13, Saito grew his army with a Baneslayer Angel.

Mihara untapped and thought for a long while before aiming a Repeal at the tapped Knight. Saito activated his other Knight in response, grabbing an untapped Plains in exchange for his tapped Temple Garden. The reason for the untapped Plains? Path to Exile on his own Knight of the Reliquary was why, denying Mihara his card from the Repeal and gaining a land in the process. Against Mihara’s combo Scapeshift deck, the Paths were unlikely to do better than that.

Treetop Village, Knight of the Reliquary, and Baneslayer Angel came across, and despite the second Elder giving its life for the cause, Mihara’s life total sunk to 12. A post-combat Lightning Helix to the face meant it sunk further to 9.

Mihara continued to Ponder, grabbing a Mountain with Search for Tomorrow off the top. He then further ramped his mana and erected a small blockade with Wood Elves, grabbing a Breeding Pool. Would 9 life be enough? Mihara looked to combo the following turn with three cards in hand, two ordered on top and eight lands on the battlefield.

Saito did all he could: he rumbled in with Angel, Knight and Treetop again. Wood Elf stepped in front of the Knight and Mihara fell to 1. Saito asked if he had it, and Mihara shook his head – he’d have to search.

He pulled Peer Through Depths from his deck and peeked one at a time. When the fifth didn’t hold his precious Scapeshift, he packed them up.

In between games, Andre Coimbra appeared, having started the process of drawing into the Top 8.

Stomping Ground into Search for Tomorrow for Mihara brought him to 18 and one step closer to Scapeshift right off the bat. Saito took 1 less damage by fetching a Temple Garden onto his side.

Mihara went down to 15 to pull a Breeding Pool, and played Zendikar quest Khalni Heart Expedition. Unfortunately, his questing for lands would grind to a halt when Saito laid a land and cast Meddling Mage naming Search for Tomorrow.

The former World Champion had a land into Ponder and Engineered Explosives on two. The Mage knew its days were numbered, but got a little boost from the Player of the Year hopeful’s next spell, Noble Hierarch, and bashed in for 3, putting Mihara to 12.

Wood Elf for Mihara fetched another Forest, turning on the Expedition. He fetched two more basics, and threw the Elf in front of the Meddling Mage to maintain his life total. Mihara untapped, laid another Mountain (bringing his Mountain count to 4) and passed it back to Saito. 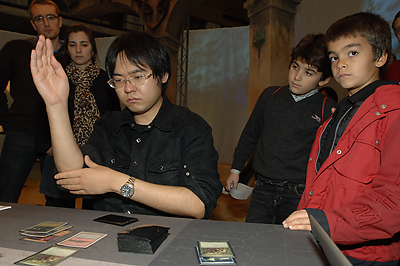 Makihito Mihara tries to chop down the competition.

Meddling Mage continued the beats, taking Mihara to 9 before he decided to pop his Explosives on Saito’s end step. Sakura-Tribe Elder hoped to hold the fort for a bit.

Saito had a replacement Mage however, and named Scapeshift. With four cards to Mihara’s three and countermagic likely in the wings, things did not look good for Mihara.

Mihara untapped with nine mana available after his Elder hit the bin. Repeal on the Meddling Mage was met by Saito’s signature Bant Charm, and a couple more hits from the exalted Meddling Mage plus a Lightning Bolt were sufficient to take it home.