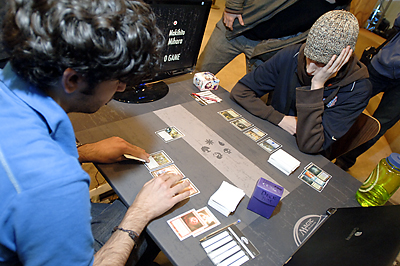 Italy was the host country for the 2009 World Championships, and Patrizio Golia was one of its final defenders, fighting to have the honor of the 2009 World Champion. His opponent, with two rounds to go in the tournament, was Manuel Bucher, a Swiss standout who is well-liked on Tour and known for traveling to test with the Americans before big events.

The two got underway with Bucher going first and Golia on a mulligan, but the Italian had the first action despite being down a card: Chalice of the Void for one. The All-In Red deck he was representing could have very explosive openings, but its key win conditions, Demigod of Revenge and Deus of Calamity, are very weak to Path to Exile. It just so happened that Manuel Bucher was playing the powerful removal spell in his Bant aggro-control deck.

Golia tried for a Blood Moon, but it was countered by Manuel with Mana Leak. His next action was Seething Song to get the mana for Deus of Calamity, a play that saw Bucher with no counter. What he did have was a Bant Charm to blow up the Chalice of the Void, regaining the ability to cast Path to Exile. Patrizio used a Chrome Mox to build a storm count, then cast Empty the Warrens for six Goblin tokens. The 1/1s paled in comparison, however, to a Tarmogoyf from Manuel that was a whopping 5/6. When it picked up an Umezawa’s Jitte, then was joined by Rhox War Monk, Golia saw the writing on the wall. All-In Red is very powerful in the opening turns, but by the time his opponent had enough mana for Tarmogoyf, Jitte, and Rhox War Monk, Golia was out of options. His 1/1 Goblins couldn’t find a bigger sibling to help and were quickly mowed down by the Jitte while Golia lost life in 8-point chunks.

The two players were silent as they shuffled for the second game of the match. With both in contention for Top 8, there was too much on the line to make small talk. 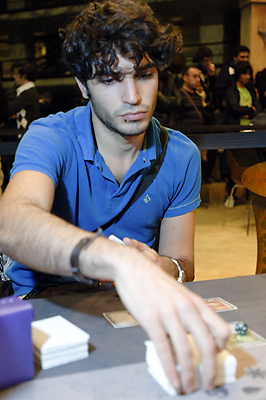 Golia gives Bucher the gift of the Magi

In the first game Golia had failed to have an aggressive start, instead casting his first spell, a Chalice of the Void, on the second turn. With a second chance he wasted no time making up for things, exiling Simian Spirit Guide on his first turn, tapping a Mountain for Desperate Ritual, and then casting Magus of the Moon. The 2/2 was very powerful against Manuel Bucher’s mana base, which featured a number of nonbasics.

In fact, the first four lands Bucher played in the game were Mountains thanks to his opponent’s Magus, and he simply took 2 each turn from the creature. Golia cast a second Magus of the Moon, and the game took an almost comical turn. Bucher started losing his life double time while playing land after land but casting zero spells. When he finally moved to his library for his last draw step before dying to the Magi, he found no help, and the two were off to the third game in less time than it had taken them to shuffle for the second! 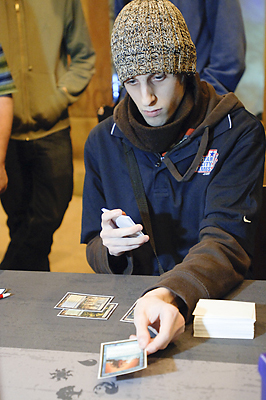 Bucher is looking to cap off his weekend They got right down to business, and Golia agonized over keeping his hand. He was on the draw, which meant his opponent would have a sliver of an opportunity to mount a defense against his deck. He needed something powerful on the first turn, and not having it at seven, he went to six to find it. It wasn’t there either, and Golia was down to five with his Top 8 life at stake.

Despite all of the mulliganing, it was still Manuel Bucher who was starting first, and he led with Noble Hierarch into Rhox War Monk. Golia hadn’t found his first-turn play even after two mulligans, but on the second he cast Desperate Ritual, Seething Song, Chrome Mox, and Empty the Warrens for eight Goblins. Unfortunately for Patrizio, he would be working with only two mana, and dealing with a lifelinking War Monk being exalted by Noble Hierarch each turn.

To make matters worse for one of Italy’s last hopes, Bucher found a second Rhox War Monk as well as a Treetop Village. It was too much for Patrizio, who managed to spin his wheels by chump-blocking with Goblins for a time, but ultimately the advantage enjoyed by his opponent was too much. Manuel Bucher emerged from the match victorious with his eye on the Top 8. The nation of Italy was at risk of doing no more than playing host to the 2009 World Championships.

4 Chrome Mox 4 Chalice of the Void