With just a single Swiss round left in the 2009 Magic World Championships there is a great deal at stake. While some slots in the Top 8 had been secured, there were others that were still up for grabs. For Tomoharu Saito, it was crunch time. He needed to win in the round to make Top 8. If he did so, there was a chance of his being able to overtake his countryman Yuuya Watanabe in the Player of the Year race. 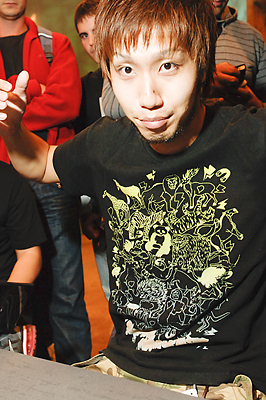 Tomoharu Saito was just one round away from the Top 8... Both players kept their opening hands, and Koska led with a Mountain while Saito had a Scalding Tarn to begin. On turn two, Rite of Flame was followed by a pair of copies of Desperate Ritual. A Chalice of the Void for zero came down, followed by an Empty the Warrens for 10 tokens. The Chalice was a particularly nice card for the situation, as it both upped storm count and ensured that Engineered Explosives wouldn’t be able to kill off Koska’s team.

Saito was on the back foot and not helped by a large amount of fetch lands, which took his life total lower. He used a Lightning Bolt to kill one token and cast a Tarmogoyf, which was soon a blocker. Attacks took Saito to 8, and he made another Tarmogoyf to help with his blocking. The next set of attacks put Saito on 2, still facing six Goblin tokens.

Saito needed land to be able to do anything, and sacrificed a Scalding Tarn to fetch Sacred Foundry, putting him at 1. Lightning Helix made it five tokens left, and put Saito to 4. Koska was miles ahead, but could see things slipping a little, and he amped up the pressure with Desperate Ritual into a second Empty the Warrens. Attacks again put Saito on 1, and now there were seven tokens to deal with.

Tomoharu Saito paused. With his back against the wall, the former Player of the Year thought through how he could possibly survive. When Koska attacked with his team again, it became clear that Saito hadn’t found an answer as he scooped up his cards.

Saito now needed to win two straight, and clearly he meant business. He took off his jacket to reveal a whole zoo of animals on his t-shirt, performed the now famous Saito Slaps on his face, and sat upright in his chair rubbing his hands in anticipation of the games to come. It felt like the moment in a wrestling match where the champ comes back after initially suffering at the hands of their opponent.

Saito’s opening hand on the play was a mulligan and Koska did the same. Again the slaps came. Saito drew his hand of six with a flourish.

“Is it good enough?” asked Koska.

The answer was no. 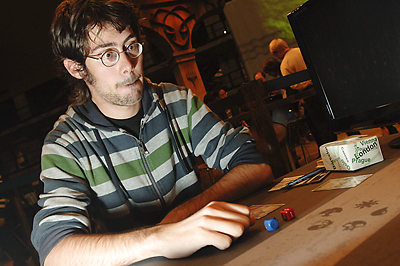 ...but with the right draws, so was his opponent Adam Koska! For the second time Saito commenced a relentless string of shuffles on his deck. The five were a keep. There were not as many theatrics from Koska’s keep, and indeed for the first couple of turns he had no play beyond land. Saito had started out with an Umezawa’s Jitte, and such land fetching as to leave him at 16 with Steam Vents, Temple Garden and a Forest on the battlefield.

It was on turn three that Koska went for it with Desperate Ritual plus a Simian Spirit Guide for a Deus of Calamity. Saito had a Path to Exile for this, which seemed to be little surprise to Koska. Turn four from Koska allowed him to play a land and cast another Deus. This one stuck.

Saito drew his card for the turn with a flourish and passed. Deus of Calamity got to attack Saito down to 9, and destroyed Saito’s Steam Vents. Still a third Deus of Calamity sat in Koska’s hand. If one on the battlefield was bad news for Saito, two was enough to leave things in little doubt.

Saito drew and extended his hand. 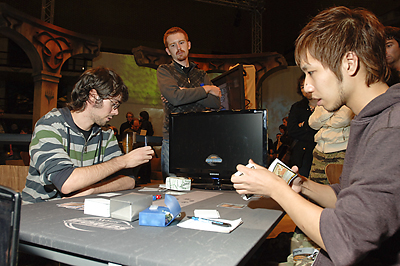 With Saito eliminated, Yuuya Watanabe is now a lock as 2009’s Player of the Year!

4 Chrome Mox 4 Chalice of the Void