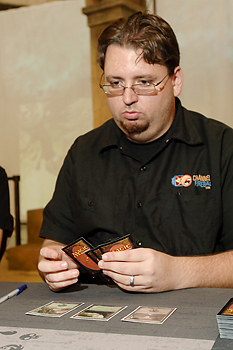 American dynamo Luis Scott-VargasRound 2 of the World Championships here in Rome saw a pretty epic fixture. Luis Scott-Vargas, as always calm and cheerful, sat down to play Magic just like it was any other day. Most days though, he does not play against a former Player of the Year. Tomoharu Saito has had three Grand Prix wins this season, and is in dark horse position to get the Player of the Year title again if he wins the whole show this weekend.

Luis won the roll, and had a mulligan on the play. Saito led of with the now famous “Saito slaps” before declaring a keep. To any of those who had thought that the Player of the Year had benched his signature move—a couple of short sharp slaps to his own face to wake himself up—you were wrong. He just saves them for special occasions like the World Championships.

Luis had a turn-one Oran-Rief, the Vastwood to Saito’s Savage Lands. A turn-two Verdant Catacombs from LSV suggested that both players might be playing some variation of the Jund deck, but not typical builds.

Saito had the first spell of the match in Rampant Growth, a new Japanese addition to the deck that is a solid way of getting out of clunky mana territory and on to the business of playing awesome spells.

Saito’s awesome spell was Sprouting Thrinax, while Luis had Master of the Wild Hunt for his turn. The Rampant Growth meant that Saito was ready with a Bituminous Blast to kill Luis’s only creature, cascading into Blightning. The Blightning took a Lightning Bolt and a Terminate from the American’s hand, and the Blast allowed Saito to bash in.

LSV did have a Blightning of his own to strike back with, to which Saito discarded lands. Still with some cards left, he cast Siege-Gang Commander, breaking out his little piggy tokens to represent Goblins. This was enough for his opponent, and Luis took no time in scooping up his cards and reaching for his sideboard. It was on to Game 2.

Luis asked of Saito what he thought of his Extended deck, and Saito just smiled, choosing not to give too much away. 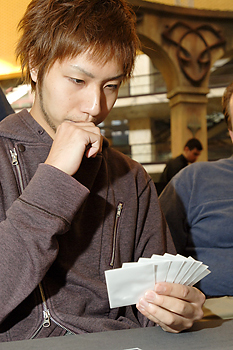 Japanese powerhouse Tomoharu SaitoIt was Saito’s turn to mulligan, and he diligently went through a very thorough shuffling process, as if in the hope that he could channel some of his energy into his cards through shuffling alone, fixing up a better six.

Both players had a Savage Lands start, and Scott-Vargas got to cast a Sprouting Thrinax on turn three without any complaints from his mana base. Saito’s turn three was taken up with Blightning, knocking a Lightning Bolt and Master of the Wild Hunt out of LSV’s hand. A second Master was still in there, though, and it was cast briskly by Luis, who was doing a good job of getting his side of the battlefield full of threats.

Saito had a Lightning Bolt for Master of the Wild Hunt, but continued to take hits from Sprouting Thrinax and was soon the target of a Blightning from the American. This nabbed a Verdant Catacombs and a Siege-Gang Commander.

The discard plan was in full force from both players, as Saito cast a Bituminous Blast after Scott-Vargas’s draw, cascading into a Mind Rot. This forced LSV to discard the Mind Rot he had just drawn, and another land, emptying his hand.

Saito had further gas in a Broodmate Dragon with which to take control of the board, and a Terminate from him stopped Bloodbraid Elf from bolstering LSV’s team, even if it couldn’t stop the Borderland Ranger the Elf found. While Scott-Vargas had started the game well, it was Saito’s Dragon that ended it, with Scott-Vargas looking to the top of his deck for answers.

While Scott-Vargas found an answer for a single dragon, he couldn’t take down both, and succumbed to the Player of the Year’s air force.