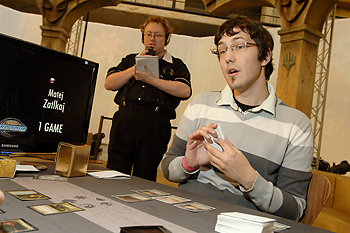 Plucky newcomer Matej ZatlkajHeading into Round 3, these two accomplished competitors were both undefeated. Zatlkaj, with a 2nd place finish in Berlin at the end of last year and GP Top 8 from Krakow 2007, was playing David to Budde’s Goliath and his whopping seven Pro Tour wins to date. Only one could emerge victorious. It was not only a battle between the most prevalent deck, Jund, and one of its predators, Green-White midrange—it was a battle between new blood and old guard, and their respective insight into Magic, life and everything in between.

On Old vs. New

“At least they improved the feature match table,” Budde said, as he sat down.

“They improved a lot of things,” Zatlkaj replied. “Oldtimer.” He looked up and smiled at Budde, and it was clear he was teasing a respected opponent.

The two continued to chat about their Magic history. “I’ve been doing okay,” Zatlkaj remarked. “Still nothing compared to you.”

“Gotta start somewhere,” Budde said. The German Juggernaut of yesteryear was friendly, and one could hardly tell how many dreams he had crushed over his many Sunday PT appearances.

“I was just starting when you were winning. I think if you ask most players, they would say that,” Zatlkaj added.

Budde chose to play, but quickly turned his seven back for six. He sighed, but eventually decided to keep. Zatlkaj was satisfied with his opener.

The two competitors kicked it off with identical Forest openers, but while Budde only had a Rootbound Crag to follow up his Forest, Zatlkaj had Noble Hierarch into Lotus Cobra into Steward of Valeron. When Budde passed without a land drop, Zatlkaj sympathized but knocked it up a notch, with Emeria Angel and then a fetch land into Birds of Paradise, mana and a Knight of the Reliquary. This immense Bant army faced down ... Budde’s two lands.

“And that’s enough,” Budde replied to his draw step, seeing no third land, and scooped his cards.

“That was the nut draw all right,” Zatlkaj said. “But I probably need it against you ... or at least, your reputation.”

On Quitting and Semi-Retiring

“Why did you quit? And when?” Zatlkaj asked as they shuffled for Game 2, curious.

“The last one I played was Philly, the double elimination one.” Budde said. “But yeah, I wasn’t really prepared for that one, and I don’t want to go if I can’t win.”

“What are you doing, studying?” Budde asked the Slovak player.

“I heard you got addicted to World of Warcraft, is that true?” Zatlkaj inquired.

“Are you still playing?”

“I mean, the game isn’t really that exciting anymore,” Budde remarked. “But I play with friends, people I know in real life.”

“Sounds a lot like Magic. Even the people who aren’t doing tournaments anymore, they are still showing up to drafts. You are always a gamer at heart.”

“At least, I am,” Zatlkaj said, nodding himself. 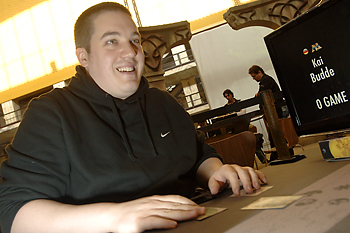 Retired titan Kai BuddeBudde kept, and it was now Zatlkaj’s turn to sigh. He thought for a moment before pitching it back and going to six. His six were also unacceptable, so he threw those back.

“Ah, good mulligans,” Zatlkaj said, peeking at his top card. “Do you peek?”

“I do peek, but it doesn’t influence my decisions. Just checking to see if I would have gotten lucky,” Budde reflected. “I’m not a big fan of mulliganing.”

“I’m not surprised,” Zatlkaj said, with a laugh.

Budde explained: “Well, there’s a lot of people who mulligan a lot more aggressively than me.”

Five to seven was good enough for the two of them. Budde’s Savage Lands and Verdant Catacombs (fetching Forest) met Zatlkaj’s Sunpetal Grove in what was shaping up to be a colorful battle. Putrid Leech came down for Budde, against Zatlkaj’s lone Lotus Cobra.

“You’re sure you want to block, right? We can trade!” Budde exclaimed.

“Unless you channel yourself for 18 ....” Zatlkaj said, smirking and clearly banking on his Cobra to live.

Budde didn’t take any chances, using Lightning Bolt to take down the Cobra, and then his Leech did what Leeches do best: attacked and leeched each player for 2 additional. Zatlkaj made up a bit for lost time with a Dauntless Escort. Sprouting Thrinax joined Team Budde, and then both came across at Zatlkaj’s freshly cast Garruk Wildspeaker and his newly minted Beast companion. Zatlkaj let the planeswalker soak up the damage, and Budde ended his turn with a second Thrinax.

Zatlkaj untapped and thought. He eventually decided on a Verdant Catacombs (down to 15) into his fifth land and tapped them all for the queen of all five-drops: Baneslayer Angel.

“How many cards do you have?” Zatlkaj asked.

“Any good ones?” Zatlkaj probed.

“Not telling,” Budde responded. “Well, not Blightning, I’ll tell you that.”

Zatlkaj laughed, and agreed. “Yeah, Blightning would be amazing. I know you have the Pulse. Or the Terminate. Or something!”

Budde spent a good while considering on his turn before dropping his own copy of Garruk Wildspeaker, making a 3/3 Beast token, and then passing it back with no answer for the mighty Angel.

That Baneslayer Angel wasted no time coming across for a 10 point life swing, making it Budde 10, Zatlkaj 15. Zatlkaj ramped his Angel count to two with an Emeria Angel, but had no follow-up land for it.

Budde sent with his double Thrinax, and Zatlkaj elected to take it, making it Budde 10, Zatlkaj 9. Zatlkaj cracked back with his Baneslayer Angel again, putting Budde down to a mere 5 life. Budde untapped and dropped his hand of four lands.

“Are these good against you?” Budde asked afterward, showing Earthquakes.

“Well, not so much,” Zatlkaj replied. “All my best creatures are flying or too big.”

“Yeah, but if you get your good draw, like one-drop and two-drop ....” Budde commented. Zatlkaj nodded his head at that.

“Maybe I should have brought in Wall of Reverence,” Zatlkaj said.

Budde was emphatic in his reply, “Yeah, that card is such a pain in the ass for me!”