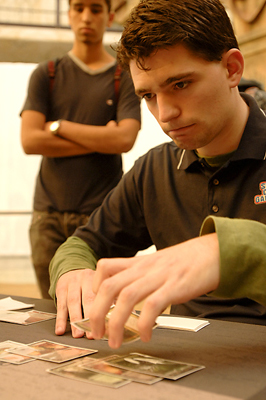 Player of the Year contender and Brazil team captain Paulo Vitor Damo da RosaA dark horse contender for the Player of the Year title being awarded at the conclusion of the weekend, Paulo Vitor Damo da Rosa is one of the world’s most famous Magic players. He is a year removed from Top 8ing Worlds in Memphis, but his opponent for Round 1 was no slouch either. Malaysian Terry Soh was a former Pro Tour great and Invitational winner, immortalized in the Dissension card Rakdos Augermage.

“Are you on a team?” Paulo asked his opponent, referring to the Worlds team competition.

“No,” Soh replied, before adding, “but my brother is!”

Terry Soh was the first player to cast a spell, though he was on the draw. That spell? Goblin Guide, which his opponent was all too happy to blow up by way of Lightning Bolt. Paulo’s deck was Jund, one of the most popular archetypes in the tournament, while Terry was playing a Naya Zoo list. His mana had worked out just perfectly, so he could even cast a third-turn Woolly Thoctar.

The 5/4 was an imposing threat, but Damo da Rosa cast a Putrid Leech, giving it a +1/+1 counter with Oran-Rief, the Vastwood before passing the turn. Unintimidated, Soh rumbled his Thoctar to the red zone and dropped Paulo to 15. He followed the attack with a Ranger of Eos to fetch up two more Goblin Guides. Paulo Vitor took his turn to cast a card advantageous four-drop of his own: Bloodbraid Elf. The 3/2 added a Sprouting Thrinax to his growing army, and it looked like Terry Soh wasn’t getting in through the red zone any time soon.

The Malaysian player considered his options carefully on his own turn, before opting to use Path to Exile to take care of the Thrinax. That meant he could attack, and he did exactly that with both Woolly Thoctar and Ranger of Eos. Paulo put Putrid Leech in front of Thoctar and Bloodbraid Elf in front of Ranger. When Vitor tried to pump his Leech, Soh responded with Lightning Bolt to kill it. After combat he cast both his Goblin Guides and a Noble Hierarch.

Paulo untapped and cast a second Bloodbraid Elf, revealing Blightning to force the last two cards from Terry’s hand. Soh drew for the turn, then sent his Thoctar back across the field to drop Paulo to a slim 7 life. Vitor wasn’t out of things completely, however, as he ripped yet another Bloodbraid Elf from the top of his deck. It was his third, and it revealed a Maelstrom Pulse, which killed the Thoctar. Soh traded a Goblin Guide for one of the Elves in combat by attacking, but had run out of gas.

Master of the Wild Hunt was up next for Paulo Vitor, and the game was quickly spinning out of control for Terry Soh. He needed to come up with some answers or more pressure soon, or he was done for. He cast a second Noble Hierarch, then attacked with Goblin Guide. Paulo blocked with his Bloodbraid Elf nonchalantly, casually placing the creature in his graveyard in expectation of trading. Instead, Soh revealed Colossal Might, which drew a raised eyebrow from Paulo. The combat trick put the Brazilian down to just 1 life, and Terry was one more Lightning Bolt away from winning the game.

Damo da Rosa cast a Great Sable Stag to join the Wolf token he had generated from Master of the Wild Hunt on his upkeep, and pumped both with Oran-Rief, the Vastwood. When Terry attacked with his Goblin Guide again, Paulo traded the Stag for the 4/4 Guide (thanks to two exalted triggers), then blew up a Noble Hierarch at the end of his opponent’s turn with Master of the Wild Hunt. Damo da Rosa went on the warpath from there, working his creatures into the red zone. He was in a race to kill Terry before Soh could find the lethal burn spell to finish Paulo off. When he couldn’t, the two were on to the second game with Paulo in the lead. 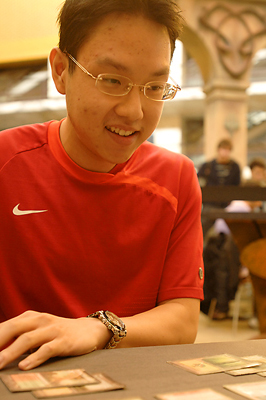 Pro Tour great Terry Soh, brother of Malaysia team captain Joe SohTerry Soh started the second game off with a mulligan, but managed to find himself a second-turn Lotus Cobra. The 2/1 is a powerful early play, particularly in decks playing Zendikar fetch lands, but Paulo Vitor Damo da Rosa knew a problem card when he saw one, immediately casting Lightning Bolt on the 2/1. Terry’s next spell was Noble Hierarch, though he missed his third land drop. He followed that up with Great Sable Stag, but had only two Forests and an Ancient Ziggurat for lands.

His opponent had had no problem finding lands, casting Putrid Leech and Master of the Wild Hunt. The Magic 2010 rare would prove very problematic for Terry’s team, as Paulo also had an Oran-Rief nestled amongst his lands. With Soh’s development slowed by his mana stumble, he was in danger of being overwhelmed by Paulo’s Jund deck. A second Putrid Leech joined Damo da Rosa’s team, and he used Master of the Wild Hunt’s ability to trade a 3/3 Wolf token for his opponent’s Great Sable Stag.

Lotus Cobra hit the battlefield for Soh, who had sandbagged casting the 2/1 until he also had a land the same turn. That allowed him to make a white mana, which he used to Path to Exile his opponent’s Wolf token generator. Terry cast a Goblin Guide, then passed the turn.

Damo da Rosa was really chugging along, sending his team of Putrid Leeches to the red zone to drop Soh to 7. Postcombat, the Brazilian cast Sprouting Thrinax, making it a 4/4 with his Oran-Rief. Terry found Ranger of Eos to fetch twin Goblin Guides, but Paulo simply used Bituminous Blast on the 3/2. That revealed a Burst Lightning, which cleared a Goblin Guide, and Damo da Rosa was easily able to attack for lethal. Soh nodded with a smile and scooped up his cards.

3 Master of the Wild Hunt
73 Cards