The internet is a wonderful thing. When I logged on this morning to check my email and such, I saw Rasmus Sibast’s Facebook status from the start of the tournament. 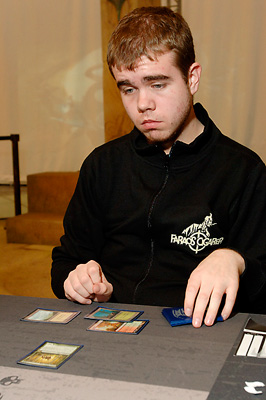 Rasmus Sibast, would-be lucksackI bumped into Rasmus around the end of Round 4. He had colossal headphones on, so our conversation about how he was doing was conducted entirely with hand gestures. The swing that the smile on his face put on the conversation made it clear that the four fingers he held up stood for wins and not losses.

As he sat down for the match, Sibast breathed out heavily

At 4-0 each, both Sibast and Pro Tour–Valencia winner Remi Fortier have had some luck thus far, and it was Fortier who had the luck to win the roll, allowing his Jund deck to start off on the play.

Both players kept and Fortier led off with Savage Lands, while Sibast had an Arid Mesa. Fortier played a Lotus Cobra as his first threat, but didn’t have a follow-up play the next turn.

Sibast’s deck was something of a mystery. Its first play was a Great Sable Stag off Plains, Forest, and Rootbound Crag. The Stag did not last long, as it was offed by Fortier’s Lightning Bolt. In the meantime, Fortier had started to build his board with successive copies of Bloodbraid Elf. While the first Elf hit a redundant Maelstrom Pulse, the second found a Sprouting Thrinax.

Sibast had a second Great Sable Stag, to hold off the Thrinax, and with Chandra Nalaar and Path to Exile, he whittled down Fortier’s attacking options before dropping a Knight of the Reliquary. As a 4/4 the Knight was a good target for Bituminous Blast, which found Fortier a Lotus Cobra. The powerful cascades were gradually getting Fortier ahead in the game, and even when Great Sable Stag killed off one Sprouting Thrinax, it didn’t slow down the Frenchman.

When Siege-Gang Commander joined Team Fortier, it was enough to prompt a concession from Sibast. Had his luck run out?

A veritable mountain of cards came out of the sideboard for Rasmus, who was clearly prepared for this match-up. Fortier also made adjustments for the following game, and rigorously shuffled his 60 before doing the same for his opponent’s. 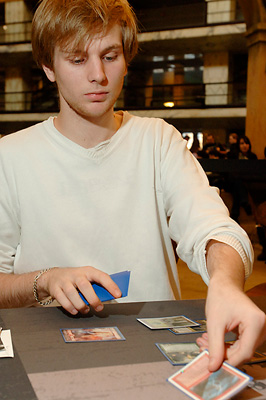 Pro Tour–Valencia champion Remi FortierSibast had a mulligan on the play, but still had a Noble Hierarch to start, which begat a turn two Great Sable Stag. The Stag is a strong player against Jund, which typically has just Lightning Bolt to deal with it. Unfortunately for Rasmus, there was one waiting from Fortier, which blunted his draw a little. A second Stag came along, but no land, which prompted a Maelstrom Pulse from Fortier on Sibast’s Noble Hierarch.

Bloodbraid Elf from Fortier found Rampant Growth, while Sibast played a Knight of the Reliquary. Fortier looked to edge in front, playing a Chandra Nalaar that killed off the Knight immediately, with enough counters up to be able to kill the Stag the following turn. When Rasmus tried to attack it, Bloodbraid Elf stepped in the way. The next turn Rasmus had a Noble Hierarch, which was a fine target for Chandra, and a Siege-Gang Commander to make a wall of blockers.

Siege-Gang Commander’s tokens did good work killing off Great Sable Stag, meaning that Chandra got to stay active, and actually work on building counters up. Fortier’s sideboarded planeswalker was a great answer to Sibast’s deck. It kept Rasmus’ side of the board pretty clear, and meant that the ever increasing board presence from Remi was swiftly enough to seal the match.