After a slight misunderstanding about who was supposed to sit where, Japanese National Team member Yuuma Shiota arrived to the feature match Arena to face his opponent, avid Magic writer and GP–Zurich champion Manuel Bucher. They shuffled in silence. These two competitors were sitting pretty at 4-1, but a finishing Standard record of 5-1 sure looks better than 4-2—and both knew it. 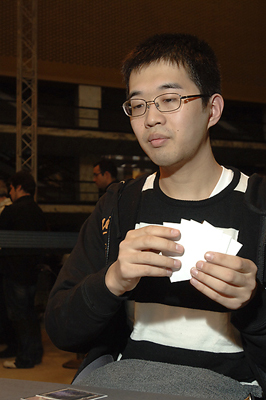 Japanese team member Yuuma ShiotaBucher won the roll and opted to play, beginning with a Sunpetal Grove. Shiota matched him with another Magic 2010 dual land, Dragonskull Summit. Shiota’s second land gave him Rampant Growth, which some Japanese players have been using rather than Putrid Leech to ramp into more powerful spells in their Jund concoctions.

Bucher’s third land brought him the full set of Bant colors and, with them, a Rhox War Monk. Shiota matched it with another of powerful gold Shards of Alara uncommon, Sprouting Thrinax. The Thrinax stood in the way of the War Monk next turn on Bucher’s attack, the resulting Saprolings prepared to give their lives in Shiota’s defense as well. Knight of the Reliquary appeared for Bucher, but Shiota paused on Bucher’s end step to use Lightning Bolt to take down the already damaged Rhox.

Shiota replaced his departed Thrinax with a second copy, but Bucher seemed unconcerned. The Swiss player used up the remainder of the lifelink gift from his War Monk to use a third fetch land, giving him five mana and the ubiquitous five-drop Baneslayer Angel. His Japanese opponent sighed, but found a good response in Broodmate Dragon. When he passed, Bucher took the opportunity to double up on incremental bonuses: the Knight fetched a fetch land, which fetched a basic, giving a permanent +2/+2 to the Knight and thinning his deck further.

When Bucher untapped and attacked with Baneslayer, the life totals stood at 25 to 14, Baneslayer’s 5 points matching the 5 points of pain from fetch lands suffered thus far. After combat, Bucher followed up with a Captain of the Watch, which Shiota was quite unhappy to see.

The original Dragon soared over for Shiota, taking Bucher down to a still amazing 21. Ajani Goldmane signed on to buff Bucher’s team, and when Baneslayer Angel and Knight of the Reliquary attacked with vigilance, a Saproling token chumped the giant Knight. Bucher’s life total soared to 28 and Shiota’s plummeted to 8. Shiota was forced to send both Dragons to kill Ajani, losing the token to a still untapped Baneslayer Angel block. One more attack, and Shiota’s options were looking slim at a sliver of 2 life. He drew for the turn and scooped them up. 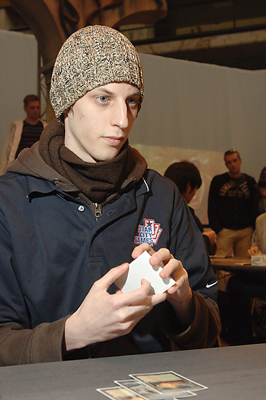 Manuel Bucher is on the side of the AngelsShiota liked his starting seven, but Bucher pitched his back for a more reasonable six. Both played lands for a bit, but Shiota got a leg up by grabbing a second land using Rampant Growth. Bucher answered with Honor the Pure, but with no creatures on his side yet, the approaching Sprouting Thrinax from Shiota looked powerful. Bucher was yet again unconcerned, since he had a Rhox War Monk to deploy to the battlefield next turn.

His opponent one-upped him, however, with a Bloodbraid Elf cascading (past Broodmate Dragon) into Maelstrom Pulse to take care of the elephantine blocker. The Elf and Thrinax smashed in for 5, taking Bucher to 13 (after fetches), but his replacement Knight of the Reliquary was destined to last a bit longer than the War Monk before it. When Shiota attempted a Bituminous Blast on it, cascading into Terminate, Bucher had his own trump in Brave the Elements naming red. He summoned a second Rhox War Monk to join his surviving Knight.

Shiota reestablished board dominance with a Siege-Gang Commander, the Goblin tokens slightly smaller than the monsters across the red zone. Bucher fetched out a Gargoyle Castle, and Steward of Valeron—bolstered by the Honor of the Pure and sitting next to the 5/5 Knight of the Reliquary and 4/5 War Monk—seemed to seal the gates from Shiota’s Jund army. Bucher finished the turn by playing a Kabira Crossroads, returning to 15 life.

The Japanese player threw a Goblin and a Bolt at the Rhox, then attacked with Bloodbraid Elf and Sprouting Thrinax. His Swiss opponent blocked the Bloodbraid Elf with his Knight and fetched a Misty Rainforest before damage, and cast Path to Exile on the attacking Thrinax. Now a 7/7, the Knight of the Reliquary chomped up the attacking Elf and lived to tell the tale—well, until Shiota spent another Goblin and Bolt killing it. Bucher was unfazed, replacing the departed Knight with a new copy.

Shiota played a second Siege-Gang to refill on Goblins, but couldn’t really attack into the 3/3 vigilant Steward, which took Shiota down to 16 next turn. Captain of the Watch from Bucher elicited another sigh from Shiota, who then untapped and thought over his possible plays. He merely added a Sprouting Thrinax and passed it back.

Bucher continued to build his massive strike force, with a Borderland Ranger fetching his fifth land, leading into ... another Rhox War Monk. Though not as impressive as the Angel, it would get the job done.

Shiota Bolted the Captain to kill half the Soldier bonus; the Honor of the Pure sitting on the table still provided the other half. Terminate took care of the second Knight, but he had an excellent follow-up: Baneslayer Angel. Goblin tokens and Siege-Gang Commanders alike were spent to take care of the teeny-tiny-okay-maybe-not-so-much Angel problem, and a Maelstrom Pulse blasted away the remaining Soldier tokens. That left the board pretty even, at Steward of Valeron to some Saprolings.

Unfortunately for Shiota and quite happily for Bucher, two Emeria Angels were forthcoming for the Swiss combatant. Bucher’s additional land plays over the next few turns meant that meant that Shiota’s Jund suite of removal just couldn’t keep up. He took one more turn looking for a topdeck and, failing to find any answers, extended the hand.

2 Captain of the Watch
51 Cards