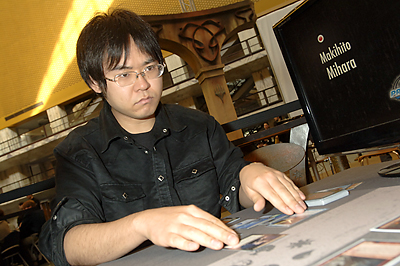 2006 World Champion Makihito MiharaMakihito Mihara entered the seventh round of competition at the 2009 World Championships with only a single loss. His opponent, Marijn Lybaert of Belgium, was undefeated but Lybaert’s two Pro Tour Top 8s paled in comparison to Makihito’s former Worlds title. The two communicated quietly, the language barrier between Makihito’s Japanese and Marijn’s Dutch making it a challenge. Still, Magic is a shared language, and the two laughed and joked about their draft pod despite coming from different continents.

The first creature onto the table was a Warren Instigator for Marijn Lybaert, while Mihara cast Quest for the Gravelord, then Hagra Crocodile. The former world champ’s mana base was a thing to behold, featuring two Swamps, an Island, and a Kabira Crossroads. His opponent, meanwhile, went on the warpath with a Highland Berserker and an Obsidian Fireheart. Makihito cast a Windrider Eel, his first capable blocker, but was at 16 and facing the possibility of losing to pings from Fireheart.

Lybaert tapped three mana and revealed a Mark of Mutiny, but realized it wasn’t the card he thought it was and untapped his mana. “So stupid ....” he muttered under his breath, before attacking with the Fireheart to knock his opponent to 12. Postcombat he lit an Island on fire, and Makihito fell to 11 on his upkeep.

The Japanese pro played a Jwar Isle Refuge, then attacked with both of his creatures. Lybaert considered blocking, but opted to take the damage instead. He fell to 6 from the 5/3 Crocodile and the 4/4 Eel, but used his opponent’s end step to crack Expedition Map for Valakut, the Molten Pinnacle. On his own turn, he finally pulled the trigger on Mark of Mutiny targeting Makihito’s Hagra Crocodile, played a Mountain, and sent his team sideways. The total damage coming through was a whopping 14. Mihara scanned through the cards in his hand, surveyed the board, and scooped ‘em up. 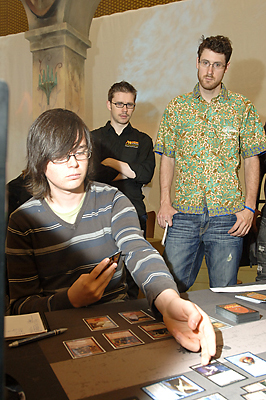 Marijn Lybaert of BelgiumBoth players had two-drops for the second game of the duel, Mihara in the form of Welkin Tern and Marijn with Highland Berserker. When Makihito followed up with Vampire Hexmage, however, Lybaert found himself needing a removal spell or being forced to not attack with his Berserker. Not attacking was the call, as the Belgian cast Molten Ravager, then passed.

The initiative was all on Mihara, as he took advantage of his opponent’s lack of removal by continuing to attack with his Tern and adding to his air squad with Windrider Eel. The 2/2 didn’t last long, however, as Marijn found one of his few burn spells in Punishing Fire, using the card to kill the landfall critter. A Goblin Shortcutter allowed him to force through with his Berserker, and the threat of the Punishing Fire in the graveyard meant Mihara would have to be careful with his lands. In the first game he had shown both Jwar Isle Refuge and Kabira Crossroads, lands whose life gain was now a liability.

The diminutive Japanese player stoically pressed on with his Welkin Tern while Marijn’s board added a Shatterskull Giant as well as an Expedition Map. With five Mountains, the Map meant Lybaert could search up his Valakut, the Molten Pinnacle and turn every single draw step into a live draw. Mihara cast Reckless Scholar and Bala Ged Thief to shore up the ground, but his opponent pressed in with Shatterskull Giant and Molten Ravager. Mihara opted to trade his Reckless Scholar and Bala Ged Thief for the Ravager, taking 4 from the Giant. Postcombat Marijn used his Map to play Valakut before passing.

The Tern flew to the red zone yet again for Mihara, and was joined there by Vampire Hexmage. Lybaert took the damage to make the life totals 12-8 in Mihara’s favor. Postcombat, Mihara added a Sky Ruin Drake to his side of the battlefield. The 2/5 was a monstrous defender standing in the way of Marijn’s mono-red horde, but Lybaert simply crashed with his whole team. Highland Berserker was eaten by the Drake, and post-combat Marijn played a Mountain, triggering Valakut and sending the 3 damage at his opponent. That put the scores at 8-3, but left the Belgian with no blockers.

Unfortunately for Mihara, he had only 6 power worth of attackers. He needed 2 additional points, or risked losing to a drawn Mountain from Marijn. In came the Tern and Hexmage, putting Marijn to 4, then Mihara cast Reckless Scholar. Lybaert untapped, cast Adventuring Gear and equipped it, then played a Mountain sending lethal at Mihara. The former champ nodded his head solemnly and shook his head in defeat.

1 Into the Roil 1 Needlebite Trap

1 Quest for the Gravelord