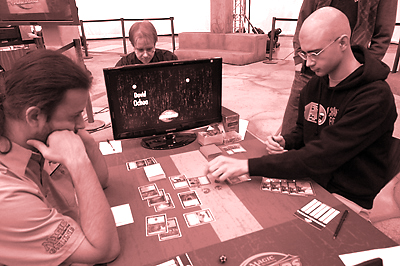 Robert Jurkovic and David Ochoa are playing 39 lands between them.David Ochoa from the United States is running pretty well at the moment. Following good finishes at PT–Austin, GP–Tampa, and GP–Minneapolis, the channelfireball.com writer sat down for Round 8 with a record of 6-1 to battle against Robert Jurkovic in the second round of Zendikar draft. Ochoa is a prolific drafter who regularly writes up detailed draft coverage for his articles, along with florid descriptions of the games that follow.

I cannot commit to a “good vs. evil” piece of prose (as Ochoa does weekly), but hopefully you’ll be able to keep up with how the match went.

Ochoa’s opponent, Robert Jurkovic, is having a pretty good weekend himself. Qualified for the Magic Online Championship Series here at the World Championships, he is playing in the main event with some success, along with playing in a second big money tournament this weekend. Jurkovic, along with former Player of the Year Shouta Yasooka and six other players, is in the Championship series, with a shot at winning $13,000 if he can prevail across the Online Classic, Zendikar draft, and Standard formats.

Jurkovic was on the play and led with Jwar Isle Refuge, while Ochoa’s start of Mountain, Expedition Map suggested that he too was multi-colour. This wasn’t further realised in the early turns though, as Ochoa played a series of Mountains, and a Molten Ravager as his first creature. Jurkovic had a Stonework Puma as his first threat, and a Gatekeeper of Malakir soon after to allow attacking to commence.

A Grappling Hook came down for Ochoa, followed by a second Molten Ravager. Jurkovic had a Hagra Diabolist to drain with, and soon attacked in with his team. Ochoa took the bait and blocked with his Ravager, pumping it to kill off Hagra Diabolist. This led Jurkovic to pull the trigger on Marsh Casualties, finishing off Ravager number 2. A Grim Discovery returned the Diabolist, and it was back to Ochoa.

David was sorely short on threats, though he did manage to kill off some of Jurkovic’s with a series of copies of Spire Barrage. All the while though Jurkovic was plinking in for small hits, not giving Ochoa time to stabilise. While Ochoa did find a Valakut, the Molten Pinnacle with his Exploration Map, it was too little too late, with Hagra Diabolist returning to the fray, soon joined by Nimana Sell-Sword. This life loss plus a larger attack force was enough to finish Ochoa off. 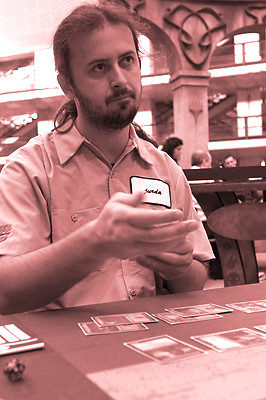 Robert Jurkovic has had some heartbreaking Top 8 misses, but this weekend he gets two tries.Both players kept their seven, and Ochoa started his offence with Zektar Shrine Expedition. For Jurkovic, the beginning was Verdant Catacombs to fetch a Swamp, and a Grim Discovery for rebuys on his fetch land.

While Jurkovic was doing just fine for land, Ochoa missed his third land drop, merely playing Plated Geopede and passing. Gatekeeper of Malakir’s kicker was sufficient to kill off the insect. Ochoa was not out of this though. Hitting consecutive land drops, a Molten Ravager first served as a solid road block, before Bladetusk Boar came along to begin attacking. Jurkovic, who stalled a little on blue mana, did have a Stonework Puma to block with, and a Surrakar Marauder with which to play his own intimidation game, but Ochoa seemed happy to get involved in a race. He had a Slaughter Cry to stop Stonework Puma from securing a trade with the Boar, and Adventuring Gear to make the now unblockable monster’s clock that much shorter. Ruinous Minotaur from Ochoa left the American with just one card in hand.

Jurkovic remained passive, observing the situation he was now in without showing undue concern. He cast a Bala Ged Thief to take the Spire Barrage which was Ochoa’s last card. A Grappling Hook from Ochoa looked to have the potential to end things with its double strike giving power. Jurkovic, wary of a big turn from his opponent, used a Vampire Hexmage to remove the counters from Zektar Shrine Expedition.

The combination of Grappling Hook and Ruinous Minotaur was looking like a winner for Ochoa. While Jurkovic had creatures, they would likely be cold to 5 power of first strike, and Ochoa could be sure that he wouldn’t have to sacrifice much land. While the Minotaur was playing crowd control, Bladetusk Boar was able to crash in, taking down Jurkovic’s life total in sizeable chunks. When Ochoa finally killed off the last of Jurkovic’s blockers, it was not a big task for him to finish off his opponent. 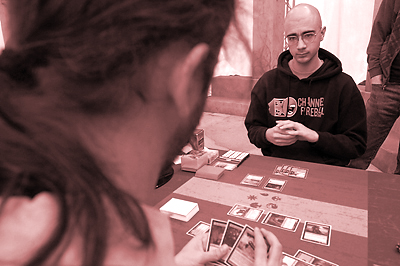 channelFireball.com’s David OchoaBoth players had mono-coloured starts for Game 3. Ochoa led with Ruinous Minotaur, while Jurkovic’s first creature was Bala Ged Thief. Ochoa, after a little thought, discarded a Spidersilk Net to the rare Ally’s ability. Ochoa had a bit of a quandary about whether or not to attack. After playing his fourth land and a Bladetusk Boar, he came in unopposed.

Jurkovic was all about the Allies this game. He followed up his thief with Hagra Diabolist, hitting Ochoa for two, and allowing him to force the discard of Molten Ravager, while seeing a second Ravager sat in Ochoa’s hand.

Adventuring Gear on Bladetusk Boar, followed by a land, seemed apt to mean that the card advantage Jurkovic was gaining through his thief might not be relevant. Ochoa crashed in, and Jurkovic threw his Hagra Diabolist in the way of Ruinous Minotaur to save some life, before returning it with Grim Discovery.

Nimana Sell-Sword meant that Jurkovic could take Spire Barrage from Ochoa’s hand, but attacks from David still took him to 7. Ochoa played a Molten Ravager and passed. The Ally train rumbled onward with Hagra Diabolist, taking Torch Slinger, leaving Ochoa empty handed. Thanks to Diabolist burn, and some attacks from Jurkovic the life totals were seven apiece. Ochoa attacked, to force a block that would mean Jurkovic was one point short on the swing back.