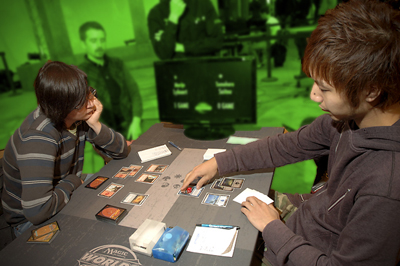 “Last game, my opponent took my turn with Sorin Markov, and attacked himself for 1,” Lybaert replied. Quite lucky is the story his grin told.

PT–Hollywood Top 8er Lybaert wasn’t the only one with two feature matches thus far this draft: Pro Player of the Year 2007 Saito had retained his seat from the previous round and was waiting patiently for his Belgian opponent. The two greeted each other with a high-five rather than the customary handshake, clearly quite friendly and happy to be sitting at 8-0. Only one of them would leave the Arena as the sole remaining undefeated player in the individual competition.

Saito sat and thought with his board of Island, Swamp, Swamp on Lybaert’s end step, and decided to Hideous End the Berserker. He continued on his turn with Hagra Crocodile, but it just sat idly by while the Shortcutter crashed in, making the life totals Lybaert 18, Saito 16. He finished with a Shatterskull Giant.

Saito landfell and swung in with his Croc, put Lybaert down to 13. His Vampire Hexmage followup seemed okay, but Lybaert had a kicked Torch Slinger waiting for the now 3/1 Croc. Shatterskull Giant got in there unimpeded, making it 13–12 for Lybaert. Saito’s next turn brought a replacement from the Hagra swamps, a Diabolist, evening the life totals at 12 apiece.

When Lybaert attacked next turn with his Shatterskull Giant into the Hagra Diabolist, apparently offering a trade, he turned the tables with a Slaughter Cry to take down the Diabolist and keep his Giant alive. A less impressive Zektar Shrine Expedition came down post-combat.

Saito had a hasty shade in Crypt Ripper, and as a 3/3 it took down both blockers that Lybaert sent in its way—the Shortcutter and the Slinger. The 4/3 Giant kept swinging on the much clearer board, taking Saito down to 8. A Molten Ravager later, Lybaert passed the turn, sitting at Valakut plus five Mountains. Eruption was imminent.

Saito kicked a Heartstabber Mosquito to take down the Ravager, and swung in with his Vampire Hexmage. This brought Lybaert down to 10, but it also meant Saito had only the Mosquito to block. When Lybaert untapped and asked Saito to confirm his life total, Saito knew that it wouldn’t be enough.

A Mark of Mutiny and a sixth Mountain later, Lybaert took the first game. 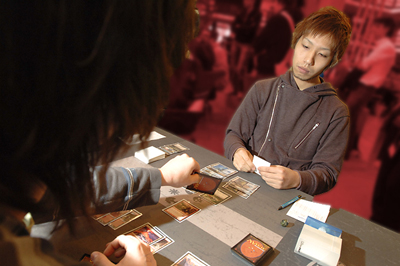 Saito diverged from the monocolor plan with Island and a turn-three Umara Raptor, while Lybaert brought Expedition Map and Highland Berserker to the table.

Saito pondered for a bit, then swung in with his Raptor, bringing life totals to Saito 20, Lybaert 18. He merely had a Soaring Seacliff post-combat and passed.

Lybaert thought for only a moment, then aimed the Mark of Mutiny at Saito’s Vampire Hexmage. Saito resolved not to let Lybaert do any marking this time—he sacrified it targeting the Berserker. Lybaert helpfully pointed at Saito’s Raptor as a potential target, but Saito shook his head with a smile. They were friends, but not that friendly.

When Lybaert smashed in with his two two-drops, Saito had an Into the Roil for the Instigator. With Saito deploying a Hagra Diabolist to drain and to grow the Raptor, the life totals became 18-13 in his favor postcombat. Not to be left out of a race, Lybaert cracked back with his Berserker. Saito declined to block, going down to 16.

Lybaert summoned a fearsome Shatterskull Giant, but Saito calmly attacked into it with the Hagra Diabolist and they traded. Lybaert was down to 10, and when he tried to resummon the Warren Instigator, Saito was ready with a Summoner’s Bane. Somewhat dejected, Lybaert cracked his Map for the Molten Pinnacle and gave the turn back to his opponent.

Saito sent in the Raptor again, making it a somewhat lopsided 16-7, and cluttered the board with Kraken Hatchling and unkicked Heartstabber Mosquito. Lybaert could only chuckle as his next turn gave him an also unkicked Goblin Bushwhacker. The two flyers brought him down to 2, and when he untapped and swung in with his 2/1 and 1/1, Saito hesitated to consider all the possible outs Lybaert might have.

“It’s okay,” Lybaert said as Saito browsed his graveyard, smiling and scooping up his cards. They moved on to the final game.

“Sorry, those are my buddies!” Saito said when he noticed, taking them back and chuckling. Lybaert chuckled along with him, putting his hands up at coming between Saito and his miniature friends. 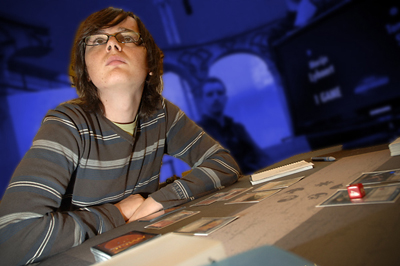 For Lybaert, things are looking up.Lybaert came out fast with a Highland Berserker, a swing for 2, and a Molten Ravager. Saito tried to put on the breaks with Giant Scorpion. Lybaert was having none of that, slamming down his Goblin Shortcutter and smashing Saito down to 14 after pumps. When Saito followed up with the first striking Vampire Hexmage, Lybaert had to consider his possible attacks. He ended up sending and trading the Molten Ravager for Saito’s deathtoucher.

Lybaert aimed Punishing Fire at the Hexmage’s face, but Saito responded with an unkicked Into the Roil (his lands were three Swamps and an Island). His attack for 4 put Saito down to 10, and when Lybaert poured it on with a Shatterskull Giant and a Mark of Mutiny next turn for the replayed Vampire Hexmage, Saito shook his hand and then Lybaert’s hand.