“It means ‘the little waterfall,’“ Cerag Kucukcaglayan said when someone asked how to pronounce his last name. “It’s nice to meet you. You’re a celebrity!” he added, turning his attention to his opponent for the round, Paulo Vitor Damo da Rosa. The Brazilian is regarded as one of the best players in the world, and is in the hunt for the Player of the Year title. Cerag Kucukcaglayan was a newcomer to the Feature Match stage, and his relatively unknown Turkey teammates had a tough draw for the first round. On top of Paulo, the Brazilians count former World Champion Carlos Romao amongst their number. 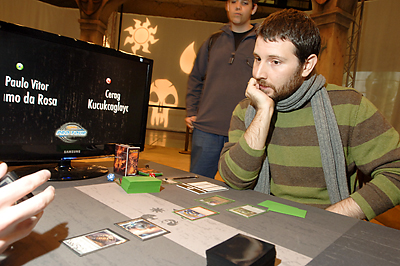 Cerag Kucukcaglayan and the Turkish team face formidable opponents in the first round of team competition.Legacy was the format du jour, and it would be interesting to see if Cerag might be able to take advantage of a possible anti-Legacy bias from the pro Paulo. Many professionals on tour avoid Legacy because it is not commonly played as a Pro Tour format, so if Cerag was a regular player of Legacy, he might have an advantage over his more seasoned opponent. Damo da Rosa got things started with a Sensei’s Diving Top, to which Cerag responded by cycling Street Wraith.

to his mana pool. That allowed him to cast Tinder Wall, and when he exiled a Simian Spirit Guide he had access to as much as four red mana. He then tried to cast a Rite of Flame, but Paulo used Force of Will to counter the spell, and Cerag found himself stuck. He needed four mana to cast either an Empty the Warrens or a Goblin Charbelcher, the key win conditions for his deck, but didn’t have enough mana. Instead he simply cast Lion’s Eye Diamond and passed the turn.

Paulo untapped and used a Swords to Plowshares to exile his opponent’s Tinder Wall. That left Cerag with just a single Chrome Mox for usable mana sources, Lion’s Eye Diamond riding the pine until the Turkish player had something for which he could use the spell. Paulo got a Tarmogoyf online to begin his clock, but was left with just one card in his hand. Cerag untapped and cast Land Grant using its alternative cost. He revealed a hand of Desperate Ritual, Tinder Wall, and Goblin Charbelcher. It was enough to go off and kill his opponent provided Paulo didn’t have a counter of some sort.

Kucukcaglayan found a Taiga, cast his Tinder Wall, sacrificed it to cast Desperate Ritual, tapped his Chrome Mox, and cast Charbelcher. The artifact resolved, and he sacrificed his Lion’s Eye Diamond to activate it, then began revealing his deck. With no lands left, he was going to deal far more damage than Paulo had life. The Brazilian took a quick look through his opponent’s deck, then moved to the second game. 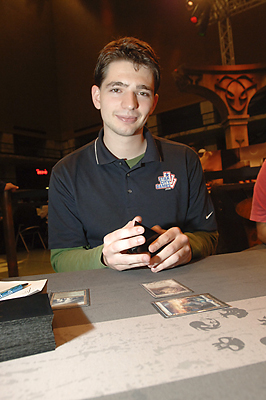 Paulo Vitor Damo da Rosa is the leader of Team Brazil, the aforementioned tough competitionPaulo sideboarded quietly for the second game, unaware that his teammate in the Standard portion of the event was down a game. The plucky Turkish team was leading the match two games to none, but it comes down to match wins, not game wins.

“So you’re a student right now, or you’re working?” Cerag made small talk with his opponent in between games.

“No, right now I just do Magic,” the pro replied.

“Ah, you’re one of the lucky ones. I’m working and married. This is just a hobby!”

The two players got down to business in this classic Legacy match-up. Cerag’s Belcher deck tried to combo through very fast mana early, enabling him to overwhelm his opponent with either many Goblin tokens from Empty the Warrens or a Goblin Charbelcher for lethal. Playing only a single Taiga, every activation of the artifact was lethal, or very close to it. Paulo meanwhile was using a blue control-style deck, similar to the Next Level Blue decks seen in Extended a few seasons ago. Card draw, counters, Sensei’s Divining Top, and Tarmogoyf to finish things off were the order of the day for the Brazilian.

Damo da Rosa spent his early turns on lands and Sensei’s Divining Top, while Kucukcaglayan cast a Lotus Petal, then discarded Goblin Charbelcher followed by Burning Wish. Eventually he found the lone Taiga in the deck, drawing a smile from both players, but by then Paulo had cast and was attacking with Tarmogoyf. Brainstorm, fetch lands, and Sensei’s Divining Top had also made sure Paulo Vitor’s hand was filled with the tools he needed to disrupt any attempt his opponent made at comboing off. In the background, Paulo’s teammate in the Standard portion evened the match to 1-1.

Desperate Ritual hit the graveyard for Cerag Kucukcaglayan, who used a Spirit Guide to give him the last mana he needed to try for Goblin Charbelcher. His opponent had Force of Will to counter, then continued attacking with Tarmogoyf. Unable to find the mana and disruption to fight his way through his opponent’s wall of countermagic, Kucukcaglayan soon found himself succumbing to the Tarmogoyf beats, and the players headed to Game 3.

By the time the two players had reached their third game, the Brazilian team had carved out a lead as Carlos Romao took a game in the Extended format. That meant they were up in games at 3-2. Kucukcaglayan and Damo da Rosa were silent as they shuffled. On the play, Cerag opted to take a mulligan after conferring with his teammates. The Standard member of the team came over to the match to report Brazil had prevailed 2-1, giving them a match lead of 1-0.

Kucukcaglayan kept his hand of six, but simply passed the turn without playing anything. He did the same on the second turn, while Paulo used Brainstorm to dig himself to some goodness. After a few turns of draw-go by both players, Cerag finally pulled the trigger. He cast Chrome Mox, then exiled two copies of Elvish Spirit Guide before casting Manamorphose. That met a Spell Snare from Paulo, but the Snare was countered by Cerag with a Pyroblast. Damo da Rosa cracked a fetch land, then allowed the Shadowmoor instant to resolve. When Kucukcaglayan tried Desperate Ritual, however, his opponent paid two mana to Daze the spell, ending the Turkish player’s turn prematurely.

Krosan Grip did a Stone Rain impression by taking out Kucukcaglayan his Chrome Mox, his lone permanent source of mana, and Damo da Rosa followed up with Tarmogoyf. The powerful green creature went on the warpath, and Cerag didn’t find enough fuel to refill his hand before the future-shifted rare could munch him to death.