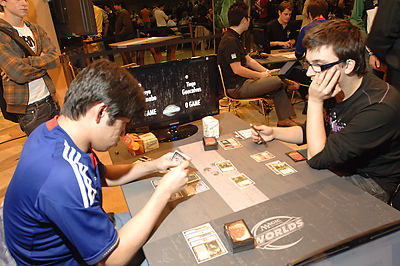 Yuuya Watanabe of Japan and Tiago Goncalves of PortugalGoing into the second team round, Japan is looking to continue its good run as a team, making up for a slightly weaker Standard day than they might have hoped for. Last round they won in a squeaker, and a good result here would do much to put their team plan back on course.

Yuuya Watanabe was playing against Tiago Goncalves in Extended. Here he had Dredge, the same deck that he played in Austin. Would this mean that it would be the Extended deck he would play in the solo competition? The answer for that would have to wait a couple of days. It would be a bold gambit to reveal a deck choice early, but testing more than one is quite a bit of work. Ultimately part of Yuuya’s deck decision for Extended in the solo part of Worlds might be determined by the record he needs, in addition to any other preferences he might have. Goncalves was playing Zoo, the deck that had been so prevalent in the Austin top 8.

Both players took a mulligan in this Dredge vs Zoo matchup, while just a few feet away Shuhei Nakamura was busily settling in for a Jund mirror match in Standard against. There were more mulligans over in the Legacy area, where Yuuma Shiota was battling with Zoo against Frederico Bastos’s Goblin deck.

Goncalves, for Portugal, had the play, with an impressive roll of a 12 on a pair of six-sided dice, and started with Treetop Village, while Yuuya had a fetch land, getting Watery Grave, to allow a Drowned Rusalka. A Noble Hierarch and Lightning Bolt came from Goncalves, who was keen not to let discard outlets stay on the board if he could.

A follow up Rusalka came from Watanabe, though, and survived unmolested to be joined by Hedron Crab from Yuuya, which immediately got to mill a Golgari Grave-Troll into the Japanese graveyard. A Tarmogoyf from Goncalves suddenly looked a little slow.

The Tarmogoyf and Treetop Village attacked. By this point Shuhei Nakamura was already a game up on his opponent, who was just visible through the crowd shaking his head at what must have been a quick and powerful draw from Nakamura.

Hedron Crab blocked and was sacrificed to Drowned Rusalka, dredging the Grave-Troll and allowing Watanabe to discard a Bridge From Below. The dredge put Stinkweed Imp in the graveyard. Subsequent dredges in draw step got Watanabe up to two Grave Trolls and a Bloodghast in the graveyard, and a Narcomoeba in play. 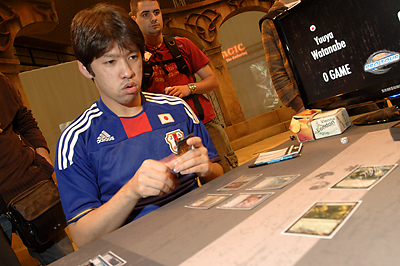 Watanabe rocks the blue jersey worn by all three members of the Japanese team.Yuuma Shiota came over and got a little bit of advice from the experienced Watanabe for his Legacy match of Zoo against Goblins. This didn’t shake Watanabe off his Game 1 bit, though. He passed and used his Narcomoeba as a blocker to keep his life total up, and sacrificed it to Drowned Rusalka, getting his graveyard even more fully loaded thanks to juicy dredge targets, and letting him discard Iona, Shield of Emeria to the Rusalka’s ability.

A nice dredge of Dakmor Salvage provided Watanabe with both a second Bloodghast, and a Bridge From Below. This really juiced up his ability to go crazy with Drowned Rusalka, and he duly did so, quickly getting a Flame-Kin Zealot into his graveyard off the Rusalka’s ability, and finally finding a Dread Return off the first dredge. Actually killing Goncalves was a formality.

It seemed that the Jund mirror had favoured Shuhei Nakamura, who by the end of Watanabe’s Game 1 was already sitting next to Yuuma Shiota to provide advice in the Legacy matchup. A pair of Goblin Ruinblasters had handily ensured that everything worked out for Nakamura. Shiota had taken Game 1 already too, pretty convincingly. While Frederico Bastos was stuck low on lands, relying on Æther Vial to play out creatures, Shiota had a pretty solid Zoo draw, with a Knight of Reliquary getting large, and eventually an Elspeth allowing the Knight to take to the air—not a place in which Goblins are notoriously comfortable.

Up a match and up 1-0 in the other two, things were looking pretty good for Team Japan.

The ability for players to help their teammates is one of the nice points about the team competition that sets it apart from other formats. While it might have felt a little hard for Portugal to face off against a pair of players, Goncalves didn’t seem to mind too much having a second opinion on his plays for Game 2 against Yuuya Watanabe, who was hoping to lock up the Player of the Year title.

A double mulligan came from Goncalves, who winced as he shuffled. Watanabe had kept a full grip of seven.

Over at the Legacy table, things were looking up for the Portuguese Goblins. A Blood Moon was keeping the Zoo deck off its best threats, and making a pair of Wild Nacatls rather less exciting. 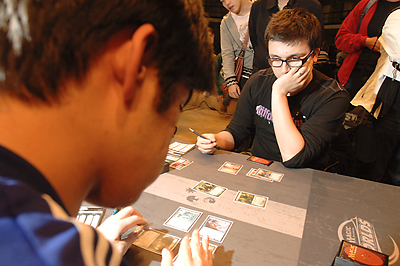 Goncalves keeps it a bit more casual.On the play from his double mulligan, Goncalves led with a fetch land into a Temple Garden for a Wild Nacatl of his own. Grove of the Burnwillows followed, allowing a Noble Hierarch, and a Lightning Bolt to off Watanabe’s first turn Hedron Crab. Not a shabby start off a hand of five thus far.

Watanabe cast Glimpse the Unthinkable on himself, but it was a fairly unimpressive one, hitting a Darkblast, a Narcomoeba, Dread Return and lots of lands. Watanabe took attacks that put him on 11, Goncalves passing with two mana up.

A dredged Darkblast made Watanabe’s graveyard no more exciting, but he did get to kill Noble Hierarch with it, and once Drowned Rusalka joined the team, he at least had more blockers to buy time to hit bigger and scarier dredgers.

When Goncalves went for a Punishing Fire on Narcomoeba, it forced Watanabe into action. He sacrificed a fetch land to get the mana to off his own creature to Rusalka, and finally got some goodies into his graveyard, thanks to being able to discard a Stinkweed Imp then dredge it. Suddenly Golgari Grave-Troll, Bridge from Below and Bloodghast were all players in Watanabe’s game.

While Goncalves was able to put a hurting on Watanabe’s mana base with a Ghost Quarter (when the Japanese player was all out of basics), this did little to slow down the great dredge engine now that it had started. Thanks to Bridge from Below, Rusalka’s ability led to some whopping dredges, with fresh Zombies being created to fill things up, before a final Dread Return got back Iona, Shield of Emeria, to go alongside six Zombie tokens. Iona named white.

From here things were pretty much academic. It was not long before Japan was up two matches to zero.

The second game in Legacy had shown the power of Blood Moon vs, Wild Nacatl, and things stood at 1-1 in that match. In Game 3, a questionable keep from Bastos left him light on land again, working on playing higher-cost Goblins using Æther Vial once more. Shiota’s draw wasn’t perfect either, as his Wild Nacatls, while not the 1/1 creatures they had been in Game 2, were still not all that they could be, as he was short a source of white mana. When the first such source came, team Japan had to laugh. Karakas was plenty good at letting white spells be cast, but it couldn’t pump those kitties.

Shiota began to eke out an edge, building up his force to include a Tarmogoyf, and bashing his opponent low. By the time Bastos could get out a Goblin Warchief and a Goblin Sharpshooter, he was on too low a life total to feel remotely stable. The final points came from a Lightning Bolt, which meant Shiota had a slightly larger Tarmogoyf—along with a slightly deader opponent.

Team Japan got the sweep in this match for a comfortable victory over Portugal!

4 Golgari Grave-Troll 2 Life from the Loam