Worlds 2009 Team Round 3: Changing the Subject 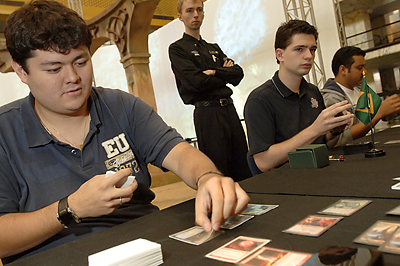 Carlos Romao, left, and the rest of the Brazil National Team”You were World Champion in ... 2006?” Bernhard Lehner asked Carlos Romao as they sat down to battle for their team feature match.

“Oh. How are you doing at the competition this weekend?” Lehner pressed, making small talk while shuffling for the beginning of the game.

“Do you want to talk about something else? Soccer? Instead of how I’m doing at Worlds?” Carlos demurred, laughing and clearly embarrassed about his record on the weekend. Bernhard laughed with his opponent, and obliged, switching topics to the European Cup.

The two players were playing Extended, while next to them Paulo Vitor Damo da Rosa of Brazil battled Benjamin Rozhon in Legacy and at the end of the table Aristides Camara (Brazil) faced Benedikt Klauser (Austria) in Standard. Lehner was on the play and dropped Mountain, then cast Chrome Mox, used the two mana to Desperate Dark Ritual, and plunked a Magus of the Moon onto the battlefield. “Well, now you know what I’m playing ....” He said.

Carlos had back-to-back Islands, which drew a raised eyebrow from his Austrian opponent, who was no doubt surprised to see so many basic lands from his opponent. ut Carlos had no countermagic as Bernhard cast a Seething Song and used the mana for a Demigod of Revenge. His All-In Red deck was off to an All-In start, and Carlos Romao could play only a Hallowed Fountain to help keep him in the game. That wasn’t enough, however, as he couldn’t find anything to deal with the flying 5/4 and the 2/2 Magus was keeping his mana disrupted. His hands tied, he conceded the first Game 5 minutes after beginning it. 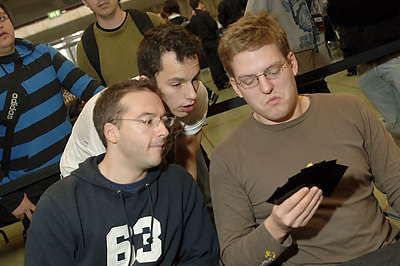 Bernhard Lehner, right, consults with his Team Austria teammates.”So who starts for the second?” Bernhard asked his opponent while they shuffled for the second game.

“I do. I think it’s better, you’re too fast,” Romao responded with a smile.

The Brazilian team had to take a mulligan, and while Carlos was reshuffling his teammate Paulo Vitor Damo da Rosa informed him he had managed to beat his Austrian opponent Benjamin Rozhon in the first game of Legacy. At the other end of the table it was a different story, as Austria’s Benedikt Klauser had dispatched Aristides Camara of Brazil in the first game of Standard.

Arid Mesa was the first land on the table for Carlos Romao, but his opponent blew up on the first turn, playing a Mountain, casting two Chrome Moxes, and plunking a Blood Moon onto the table. That merited a response from Carlos, who sacrificed his Arid Mesa to find a Plains. His second land was an Academy Ruins, while Bernhard Lehner was all too happy to use Seething Song for a Deus of Calamity. The 6/6 didn’t last long, however, as Romao sent it on a Path to Exile

The two entered a game of draw-go, with Carlos missing his land drops and still stuck on two while Bernhard had access to five mana but no threats to cast with it. As Romao reached eight cards in his hand and began discarding, Lehner looked to the top of his deck each turn for an offense. The Brazilian former World Champion found a third land in Seat of the Synod, but his opponent finally found some attackers, using Desperate Dark Ritual and a Blood Moon to build a storm count, then casting Empty the Warrens for six 1/1 Goblins. The following turn he cast Magus of the Moon to help the cause, and Carlos Romao sighed heavily.

The tokens worked through the red zone taking six-point chunks out of Romao’s life total. At 7, he rapped the top of his deck looking for a good draw to help him out. He found it in an Island. The land allowed him to cast Trinket Mage, which in turn fetched up Engineered Explosives. The Fifth Dawn rare was exactly what Carlos needed to kill his opponent’s team and, as an added bonus he would get to blow up two Chrome Moxes too! Lehner tried to rebuild with a hard-cast Simian Spirit Guide.

The game took a decided turn for Romao, who cast Meddling Mage set to Demigod of Revenge, then cast Sword of the Meek and equipped it to the 2/2. When Bernhard cast Deus of Calamity, Carlos was read with Path to Exile, and even got to resolve a Thirst for Knowledge to dig to more action. Even better, his teammate Paulo Vitor emerged victorious in the Legacy seat, giving the Brazilian team a one match lead. 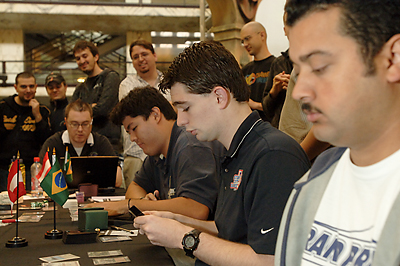 Team Brazil is hoping to avoid picking up their first team loss.A second Meddling Mage from Brazil locked out Empty the Warrens from the Austrian red deck, and Bernhard began furiously discussing something with his teammate Benjamin Rozhon. They were trying to figure out a game plan, and it was critical they came up with something that would allow Bernhard to get back into the game. Benedikt Klauser had evened the match count by taking the Standard set away from Camara Aristides. Brazil and Austria were tied at 1-1!

Lehner couldn’t get anything going, and was quickly falling to his opponent’s army of 2/2s backed by Sword of the Meek. He used a Relic of Progenitus to find an extra card, anything that would help, but when he didn’t the weight of the round clock ticking down in the background became too much and he conceded the game to save time for the third duel.

Both players kept their opening hands for the rubber game, but rather than exploding onto the board with a flurry of rituals and large creatures, Bernhard Lehner simply played a Mountain and passed the turn. Carlos Romao played a Hallowed Fountain untapped, then used the mana to cast Aether Spellbomb. He had no immediate answer to his opponent’s Magus of the Moon, which Bernhard cast on his second turn, accelerated to the battlefield with a Chrome Mox.

Rite of Flame allowed Lehner to plunk a Deus of Calamity onto the table, and the 6/6 was protected from Aether Spellbomb by Magus of the Moon; Carlos had no basic sources of blue mana on the table with which he could use to bounce the Shadowmoor heavy hitter. Instead, he cashed in his Spellbomb to draw a card, no doubt hoping for a Path to Exile he could cast with his Plains. He didn’t have it, however, and Bernhard Lehner cast Demigod of Revenge to crash in for a whopping 13 damage all in one turn. Romao took it, then lost a land to the Deus. Carlos nodded his head, then extended his hand. Bernhard Lehner had defeated the former World Champion, and Austria had triumphed over Brazil!

2 Wrath of God 2 Day of Judgment

4 Rite of Flame 3 Empty the Warrens

4 Chalice of the Void 4 Chrome Mox