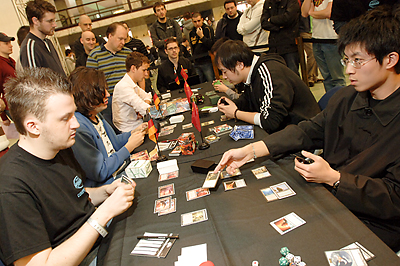 Team Germany and Team China square off.The German National Team has quite the pedigree. Sebastian Thaler is a former Rookie of the Year, and Lino Burgold, who won GP–Hannover earlier in the year and finished in the Top 8 of GP–Paris earlier this month, is poised to fight for the same title in 2009. Their opponents in the final team round of the competition were China, who are battling well this weekend, as they frequently manage to in spite of not having the Pro Tour experience of many other teams in the competition.

The match-ups were as follows.

Things kicked off fastest in Extended, as might be expected, where China was lucky to be on the play, as it afforded the white mana necessary to Mana Tithe an attempted first-turn Magus of the Moon that would have been potentially game over. A quick Deus of Calamity was the next play from Germany there, though, and it stuck, which looked pretty scary for China.

In the Jund mirror in the middle, Lino Burgold quickly found himself staring down a Putrid Leech, without a threat of his own to fight back with. Many Jund builds are now eschewing the Leech in favour of easier mana and more late game cards. In this instance, Lino just didn’t have an early threat, though he quickly made up for that with a Bloodbraid Elf. China still seemed on the offensive in the early game there though, even if it was in rough shape in the Extended.

China’s Extended plan improved somewhat when both sides of the Sword of the Meek / Thopter Foundry plan came together. Would it be enough to stop Deus of Calamity, though, when backed up by a Magus of the Moon? Perhaps not ....

The Legacy match started pretty slowly, as Li Bo of China had a double mulligan to begin. Bo admitted as he shuffled that Legacy was not a format played much in China, and although he was on the play, he had nothing more than an Island to begin. Thaler’s start was a little spicier. A Mox Diamond and Ancient Tomb powered out a turn-one Trinisphere. There was nothing that Bo could do about this. When a Smokestack followed, that was enough to seal things.

China might have been down in Legacy by a game, but they took the other two Game 1s pretty fast. In Extended, Thopter Foundry and Sword of the Meek were joined by Krark-Clan Ironworks. This allowed Zhiyang to sacrifice his Sword for mana to make tokens, getting back the Sword again. Infinite life, mana, and creatures was enough to beat Deus of Calamity and friends.

The Jund match wasn’t quite as dramatic as the other two, but Goblin Ruinblaster put the nail in a coffin built of clunky draws from Burgold in Game 1. China had had a solid set of Game 1s, and looked pretty happy going into their respective Game 2s. 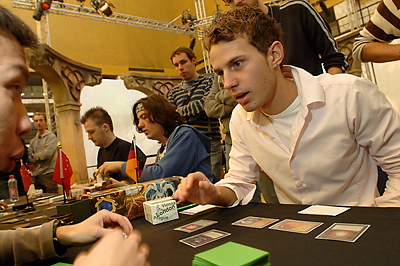 Sebastian Kuchenbecker, Lino Burgold, and Sebastian Thaler play for GermanyBy the time that the Standard and Legacy decks had finished shuffling, All-In Red had caught right back up and won Game 2. A lightning-fast Magus of the Moon stuck, and Chalice of the Void set to zero meant that Chrome Mox from China couldn’t break out of the mana issues that the Magus represented. When fatties followed, that was enough to finish things off. On to Game 3 there.

Legacy Game 2 started better for Li Bo of China. He had turn-one Island and Æther Aether Vial. On top of being double the number of cards that he had in game, the Æther Aether Vial would provide a way of breaking out of any kinds of Trinisphere lock. Thaler again had a turn one Ancient Tomb and Mox Diamond start. This time though it allowed a turn one Defense Grid. Thaler had a Suppression Field to follow the next turn. The Defense Grid ensured that Bo would not be able to counter the enchantment, and now even with the Aether Vial, he was under the kosh in terms of mana.

Games were slowing down a little now across the table. All-In Red didn’t get to explode quite so much as there was a Mana Leak for its first threat, and in the Jund mirror both players had creatures, allowing the board to stall somewhat.

In Legacy, China went for a Wake Thrasher. Time to beat down. Thaler had a Smokestack, but nothing more. Wake Thrasher got to beat in for four, and Bo followed up with a Standstill. Thaler played out a Trinisphere to break it, and passed.

Over in Extended, both Sword of the Meek and Thopter Foundry had shown up, making a mockery of a Blood Moon in play.

In Legacy, Æther Aether Vial allowed an end of turn Merrow Reejerey in spite of Suppression Field, and untapped into a massive Wake Thrasher. When he then cast a Lord of Atlantis, he was able to crash in for enough to convince Thaler it was time for a third game.

The Thopter Foundry plan had worked out just fine for China. It took the first match of this team battle with its combo once more. Meanwhile Burgold had won his Game 2, meaning that there was still plenty to play for as the other two matches went on to Game 3. 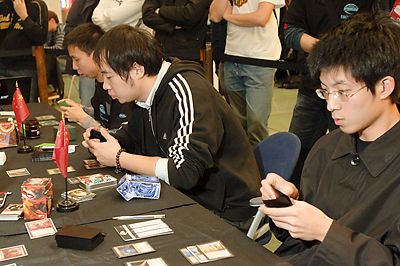 Li Bo, Wu Tong, and Zhang Zhiyang represent China.The remaining players conferred on sideboarding plans for their respective deciding games. One of the nice things about team competition is the sense of camaraderie – players on teams are allowed to ask their teammates for advice as necessary, something that each team took advantage of when appropriate.

On the play in the deciding Standard game, Wu Tong of China had a turn-two Putrid Leech. Burgold got ahead on Blightning advantage though, and had a Goblin Ruinblaster with which to battle. It was soon followed by a Bloodbraid Elf into a second Goblin Ruinblaster. China had a pair of Sprouting Thrinax by comparison. Germany looked to be in the race, but China had other ideas. Jund Charm to kill one side of the board sealed things.

China wins in the Standard.

In Legacy, Sebastian Thaler started with an Ancient Tomb into Chalice of the Void for one. The Tomb got hit by Wasteland, but Thaler still managed to get a fairly quick Defence Grid into play.

Bo was all about the beatdown, and started with a Lord of Atlantis. Merfolk Sovereign was next, which seemed more powerful in the match-up than Crucible of Worlds from Thaler. A Wasteland lock was not going to do much against a bunch of Islands.

Bo continued to beat down, and looked on as Smokestack entered the battlefield for Thaler. It would get some use out of that Crucible, but looked a little slow to get online against Bo’s strike force of fish-people. Thaler looked a little concerned, and got into a hushed conversation with Lino Burgold as to what to do next. He broke Standstill with Trinisphere, looking to limit whatever beats were coming where he could.

Bo played Merrow Reejerey, knocking Thaler down to 1. Thaler drew for his turn, chuckled to himself and extended his hand. Germany was well and truly beaten.

China gets the sweep against Germany in the teams competition!

1 World Queller 3 Magus of the Tabernacle

8 Plains 4 Chalice of the Void