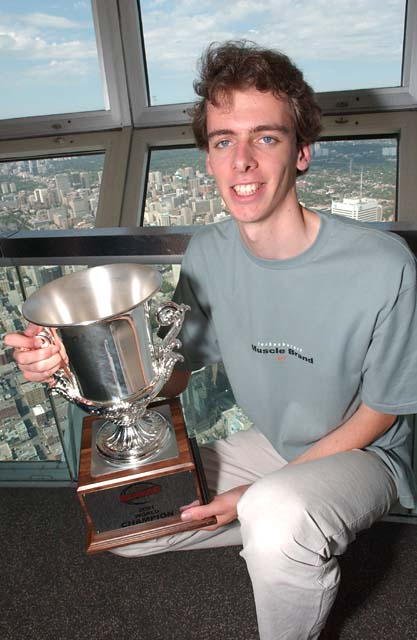 World Champion Tom Van de LogtBaseball has the World Series, Football has the Super Bowl, and has Worlds. Granted, the World Series has been around since 1903 while Worlds started in 1994, but that doesn't mean Magic's most prestigious event isn't approaching legendary status. Worlds is definitely the biggest event of the year, with five days of competition and the best payouts of any Magic tournament. It also showcases that truly is a game of international proportions. 54 teams from different countries played in this week's team competition, and had the opportunity to represent their nation in an international competition. The opening ceremonies were very inspirational, as each participating country's flag was carried by a team member. As flag after flag passed, it became apparent that Magic's influence around the World has grown much more than anyone could have expected when the game was first released in 1993.

Historical implications aside, the true meaning of the week was competition. Aside from testing skill, Worlds also tests endurance. Standard was the format for Wednesday, Thursday was Rochester Draft, and Friday was the first major tournament to use Extended in quite some time. The players who came out of those 18 rounds as Top 8 finishers got to take a break on Saturday, when the teams did four Rochester drafts to decide who would play in the team Finals. Finally, the Top 8 and team finals were held on Sunday. Why would players subject themselves to this marathon? There was a total of $400,000 given away this week, and most competitors were looking to take some of it back home with them.

The big story to come out of the Standard portion of the event was the emergence of Saproling-Opposition as a metagame force. The rumor going around on Tuesday was that 180 Yavimaya Coasts were sold, which caused the entire metagame to revolve around the blue-green menace. Most players were either playing Saproling Opposition, or something designed to beat it. At the end of the day, Gert Coeckelbergh and Jan Tomcani were on top with Fires. Joost Vollebregt's Machinehead and Tommi Hovi's Dromar-Go also achieved undefeated records. Former World Champions Kai Budde, Jon Finkel and Brian Selden were all right behind them, playing the much heralded and feared Saproling Opposition deck.

After the first day ended, the buzz circulating around the Metro Toronto Convention Center was the apparent crash and burn of the American team. United States National Champion Trevor Blackwell sank like a rock, going 0-6 and ending up in dead last on Wednesday night. Brian Hegstad and Eugene Harvey didn't do much better, and the United States national team had a combined record of 6-12. Spectators, competitors and staff members alike all disregarded the notion of the American team being in contention to win the event.

On the following day, the format changed and so did the American team's performance. In total, Blackwell, Hegstad and Harvey went 16-2 in Rochester Draft, and one of those losses occurred when Hegstad was paired against Harvey. If nothing else, Thursday proved that the Americans may not always be great at Constructed, but they can still outdraft anyone on the planet. Aside from the team event, Brock Parker and Gab Tsang also came away from the draft with perfect 6-0 records.

The final day of individual Swiss competition was perhaps the most interesting. Extended is a format that has not been used for a major tournament since Pro Tour-Chicago in 1999. Since then, Trix emerged and dominated Pro Tour Qualifiers and the Grand Prix circuit until Necropotence was banned along with Replenish, Survival of the Fittest and Demonic Consultation. These bannings changed the face of Extended by removing some of its staple cards, yet the format has not been relevant since then. In addition, there was the matter of . The latest Magic expansion is defined by its undercosted and overpowered gold spells, which are balanced out by the fact that due to color restrictions, it takes a specific kind of deck to play them. This line is blurred quite a bit in Extended, where dual lands are available, and players have access to all colors without the penalty of damage or lands that come into play tapped.

As a result, some cards fit right in with various strategies. The most notable is probably Vindicate, which went into Counter Sliver and Pox decks. Overgrown Estate was easy for Oath to cast, and gave it a great way to stay alive against aggro decks such as Sligh and Stompy. Pernicious Deeds and Gerrard's Verdicts were also plentiful, and Phyrexian Arena picked up right where Necropotence left off, giving players a strong but fair card drawing tool. The top three players during the Extended portion were Alexander Witt with White Weenie, Frank Canu with Cradle Elf, and Daniel Zink with Donate-Illusions.

The final day brought with it its share of stories that will go into Magic history. The American team came back from their awful performance on Wednesday to meet up against the Norwegian team, who also earned a 6-12 record in the Standard portion. The irony was that the format to decide the National Team championship would be Standard, the same format that had given both teams trouble in the Swiss. Jan Pieter Groenhof took down Eugene Harvey's Fires deck with his Brawler Ponza, which was followed by Trevor Blackwell defeating Nicolai Herzog's Black/Red deck with Fires. The deciding match was Brian Hegstad's Saproling Opposition against Oyvind Odegaard's Fires, and Hegstad won in convincing fashion to continue the tradition of United States dominance in the team event at Worlds.

During the Quarterfinals of the individual competition, David Williams was disqualified for deck manipulation. His opponent Tom Van de Logt advanced to the Semifinals, where he defeated Antoine Ruel in one of the most exciting finishes ever seen on the Pro Tour. This set the stage for the finals, where Tom Van de Logt's black-red deck slaughtered Alex Borteh's Merfolk Opposition in three games straight. The cheap removal and efficient creatures in Van de Logt's deck were too much for Borteh's Merfolk to handle. Even when Borteh had out Static Orb and Opposition, Van de Logt was able to break out of the lock by killing off creatures with Terminate, Vendetta and Urza's Rage. Plague Spitter was also key in this matchup, since it takes out most of Borteh's creatures by itself.

With this win, Tom Van de Logt's name is now on the same exclusive list as Pro Tour mainstays such as Kai Budde and Jon Finkel, as well as players from another era such as Alexander Blumke and Zak Dolan. Many players have won Pro Tours, and that's definitely an impressive accomplishment to be proud of. However, not many people can claim to be a World Champion at anything, and until next year, Tom Van de Logt is the World Champion.