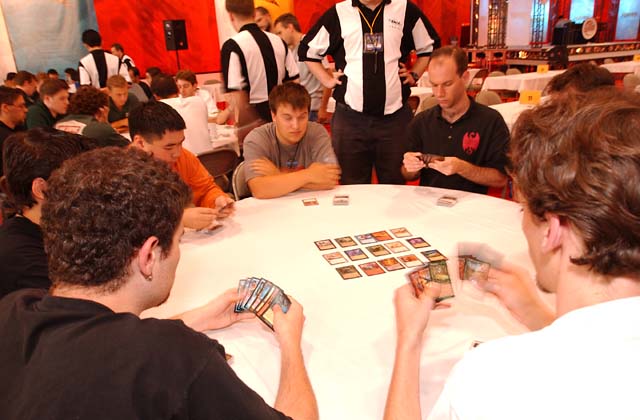 Here is an in-depth look at what the Worlds competitors consider to be good color combinations in drafting Invasion block. First I went around to all of the tables, looking for people who caught my eye, who were regulars on the Pro Tour circuit, and who were doing well in the event.

About 80% of the people I talked to had blue in their decks, and for all of those people, it was split 50/50 on if the blue was paired up with black or white. However, none of those players had a combination of W-U-B as their main colors.
After I noticed this high number of blue players, I waited around until after a few of these players were done with their matches, so that I could ask them why they drafted what they did in the first draft of the day.
Here are some of the answers that I received:

Matt Linde (w-r-u-g):
"I was going to go three colors, but I got passed a Benalish Heralds, so I considered blue, then I got passed a Spiritmonger." Linde already had a couple Elves, so it was completely feasible for him to splash in one or two cards in off colors. Linde feels that red-white-blue is one of the best combinations to draft.

Ben Ronaldson (5 color green):
Ben had planned on going blue-white (his favorite), but he had been seated next to his teammate and friend John Ormerod. "John usually drafts five-color green, but when he started going white-blue, I switched to five color. His deck was turning out better than mine."
Ben thinks the strongest combinations are blue-white-splash red, blue-white-splash green, and five-color green.

Brian Davis (g-w-u-splash black):
Brian was very happy with his draft, "As long as the person to my right stayed in their colors, I was happy."
When I asked what colors he liked to draft with this block, he replied, "Any blue cards . . . Any combination that has blue."

Mike "The Potato" Turian (five-color green):
"I like blue the best," he said straight away. When I asked specific colors, him and Forsythe came up with blue-white-red, blue-green-black, or blue-black-red.

Kai Budde (b-w-u):
The only person I've seen playing this color combination, he went 2-1 in this draft to set his position at 15th in the standings. When I asked about his preference in combinations, he stuck with "anything containing blue and white," but given a choice, he would prefer to splash red rather than any of the other remaining colors.

Dan OMS (in his words: green-blue-white with a red card and a black card):
Dan likes five-color green a lot, but he was the first person I came across that gave me a solid draft plan through the sets. He figures he could go green-blue or green-black early on in preparation for Apocalypse gold cards that would come later (for example, Gaea's Skyfolk and Ebony Treefolk).

Steve OMS (five-color green):
"I didn't draft," Steve said to me when I started to ask my questions. From what I saw and heard, he got stuck at four non-forest lands several times with Rout and six green cards in hand. Despite the poor luck of his deck today, he likes to stick with five-color green.

Dave "The Hump" Humpherys (b-u-r):
I know Dave from back home in Massachusetts, and I already knew he loved blue-white. However, I did not know that he actively avoids decks with the combination of green-white.

Bob Maher (five-color green):
Bob likes five color a lot, but he also sited examples of white-blue-red or blue-black-green. With the last two examples, he's gone with either red or black for his base removal color.

Chad Ellis (r-g-b):
"I was sitting in fifth seed, and two of the people ahead of me went blue-white. I was sort of forced into my colors."
When asked his preference he says, "I'm a very submissive drafter, so I'm fine with letting someone lead me. I like blue-white-splash red, though."

Mike Pustilnik (four-color green, missing white):
MikeyP prefers green-red-blue or white-red-blue. Notice that not one person so far has left out blue.

Ben Rubin (r-w-u):
For the first draft, Ben stuck with the all-American red, white, and blue. I asked him why he thought everyone so far has mentioned blue, and he replied, "People do draft red and blue very highly, especially in Apocalypse. It's a very strong color." He loves the color combination he drafted in the first draft and couldn't be happier with any other combination.