When Zvi’s draft concluded, Seth Burn and I were left shaking our heads, thinking that the draft went horribly awry for the Pro Tour Champion. Zvi—as he usually does—had another opinion. “I got what I came for!” 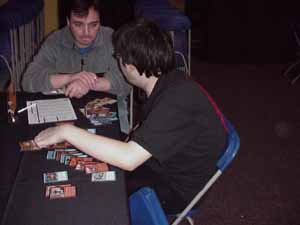 Zvi’s first pick of the draft came down to a decision between two cards; Blistering Firecat or Infest. After making sure there were no other reasonable considerations, Zvi took the Firecat. Unfortunately for Zvi, Matthew Cory had just taken Shock and passed Zvi a Lavamancer's Skills. I say unfortunate because Zvi took this a signal that Matthew would not go U/R after passing the staple card of that archetype.

But Zvi was keeping his options open and took a third pick Catapult Squad. His plan was to straddle two color combinations until he had enough information to commit to the right deck. Matthew was considering B/R and took a third pick Grinning Demon to go with his Shock and Pinpoint Avalanche. Each player took a Slateback with their next pick and a fifth pick Choking Tethers had Zvi drifting back toward U/R. Unbeknownst to him; Matthew took an Ascending Aven with his fifth selection. Zvi waffled between white cards and blue cards for the rest of the first pack but every time he took a blue card it meant Matthew had taken a red card OR a better blue one.

Daunting Defender and an eighth pick Gustcloak Sentinel presented a strong case for going white but Zvi was not prepared to give up on blue, sandwiching an Alphetto Alchemist between those cards.

At the end of the first pack, Zvi had mostly blue and white cards with three red picks; Slateback, Skill, and Firecat.

Zvi started off pack two with a Pacifism—the only other options for him were Gloryseeker and Choking Tethers. The next two picks were pivotal in Zvi’s draft. He took a Gustcloak Harrier over Pinpoint Avalanche and then resolved to more or less give up on white when he was passed a third pick Lavamancer's Skills. He had excellent options in white including Daru Lancer and Catapult Squad but passed them over—seemingly committing himself to u/r. “I was slow playing the decision and at the point I took Harrier over Avalanche I thought red would be a splash color at best…” He looked down at his two Skills and reiterated, “I got what I came for!”

Zvi picked up a couple of Mistform Dreamers and a Mistform Mutant but was still light on actual wizards to enchant with his bounty. He didn’t find any in the rest of pack two with only a couple of Forgotten Caves as picks of note.

Pack three kicked off with a Clickslither. Zvi could have taken an Echo Tracer but decided he preferred the hasty rare. He did manage to get an Echo Tracer a few picks later after a Goblin Clearcutter. He picked up a couple of Goblin Grapplers and a Blade Sliver. Glintwing Invokers in the waning picks and seemed to round out the deck for him.

“I didn’t have a deck until these Wizards came to me far later than they should have! I could have had a really solid soldier deck but I would prefer to have this one. The soldier deck isn’t going to win any Grand Prix’s. There kept being a lot of white cards bit no good ones. The bombs in white just don’t exist…what do you hope for?”

“Besides, I have been playtesting block constructed,” Zvi explained as he pulled two Grapplers, a Clickslither and Firecat and aligned them in attack formation. “I know what this does…it kills people!”

“All three drafts today came down to a moment when I had to choose between two plans and you have so little evidence…sometimes the pivotal decision can be as early as the second pick.”

Zvi looked over his deck one final time before shuffling it up. His eyes fell upon his two Skills and he concluded with, “I’m hoping that these were worth all the trouble I went through for them.”