It has some pretty cool things going on inside of it, too, just like your body! Also like your body, you won't be able to play with it for a couple weeks. At least, that's how my doctor explained it to me. So even though Eventide hasn't been released yet, only pre-released, I thought I would use the next seven thousand words (give or take) to speculate about a handful of the more intriguing additions to the Magic card pool. Let's dive right in, shall we?

Shrike While the Iron is Hot 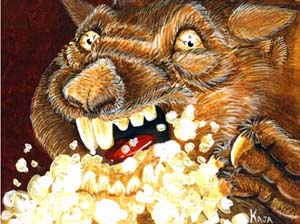 I'll go out on a limb and suggest that everybody likes a wombat. I mean, how could you not? While they might sound like one of the silliest creatures ever invented, they are, in fact, the most cunning and lethal of all the subterranean marsupials. They are completely adorable, and yet, if provoked, they will dig a tunnel and then poop a cube on your lawn without the slightest hint of remorse. They are even crepuscular! I don't know what that means, but frankly, it sounds terrifying. On top of all these vaguely sinister, but totally true, Wikipedia-vetted attributes, the magical wombat also likes to wear pants. Lots of pants. I don't know how they do it with those short little legs of theirs, but like poodles in sweaters and chimps in tutus, these wombats can't get enough of the pants-wearing. The fatter the pants, the better.

The latest non-Wombat wombat, Evershrike, puts on its pants just like the rest of us: one leg at a time. Except, once its pants are on, it kills your opponent with a series of aerial strikes. Even better, fallen Evershrikes can will themselves back to life provided there is suitable legwear available. Now that's dedication to fashion. But which pants do we pick? Well, I'm pretty sure Evershrike was born to be played Edge of the Divinity. Born, hatched, or brought by the Everstork; it doesn't matter. The two cards even appear side-by-side in the Eventide visual spoiler, for Gackt's sake. With a single Edge, Evershrike becomes a formidable 7/7 flier. With two, it's a 12/12. With ten, it becomes a whopping, if highly improbable, 52/52!

Another enchantment that works well with Evershrike is Spirit Loop. Since you can only return your Shrike successfully if you have an Aura in your hand to attach to it, it makes sense to use some Auras that are resilient themselves. If your opponent offs your 4/4 lifelinked Evershrike, you'll get your Aura back and be able to flop your Evershrike back into play at your earliest convenience. Some of the other Auras from that Time Spiral cycle (like Fallen Ideal and Undying Rage) would also work well. Traveling further back into time yields a similar cycle of Urza's Legacy Auras, but only Rancor and Sleeper's Guile are really appropriate.

To get the most out of Edge of the Divinity, I packed the deck with white-black hybrid creatures like Nip Gwyllion, Nightsky Mimic, and Restless Apparition to go along with the Evershrikes. Since all of these creatures can be played using white mana, I decided to use an (almost) all-Plains mana-base so I could play Armored Ascension. The last aura that I included is Mantle of Leadership. On its own, it isn't that exciting. Evershrike will become a 4/4 flier (with the chance to get much larger) for an initial investment of seven mana. Kind of blah. What makes it less blah, and, frankly, what makes anything less blah, are all the Goats! If you have an Evershrike in play with Mantle of Leadership on it, Springjack Shepherd will give it, at minimum, +10/+10. That's +2/+2 because the Shepherd came into play, and +2/+2 for the Goat you get from the Shepherd itself, one for the Mantle, and two more for the Evershrike. If you control any of the other creatures I mentioned, or the set of Glorious Anthems I used mainly for their chromatic density, you'll get even more (and bigger!) Goats. Springjack Pasture further smooths the flow of Goats from the aether to your kitchen table.

4 Nip Gwyllion 4 Edge of the Divinity


Since there's an outside chance that making a lot of Goats is not the best way to use Evershrike, I thought I'd take a slightly different tack. This one focuses more on Cloudgoats, their Rangers, and the production of lots and lots of non-Goat tokens. We've got Zombie Goblin, Citizen, Kithkin Soldier, Faerie Rogue, and Elf Warrior tokens. The deck very nearly had Serf tokens as well. The first two come from a pair of Spellshapers: Skirk Ridge Exhumer and Icatian Crier. If you can get either one of them to stick, your subsequent Evershrikes are effectively uncounterable as long as you can pitch them and play them from the graveyard with an Aura in hand. The aforementioned Cloudgoat Rangers, as well as Gwyllion Hedge-Mage and Cenn's Enlistment, provide the Kithkin Soldiers, while Bitterblossom pumps out the Faerie Rogues. When he's not doubling all of your other creature tokens, Rhys the Redeemed will allow you to slowly amass an army of Elf Warrior tokens. Mercy Killing also makes Elf Warriors, but the majority of the time, they will not be your Elf Warriors. The last two cards are also pretty hilarious with Mantle of Leadership.

Besides the token makers, the main reason to go black was for Fallen Ideal. As I explained, it's another Aura that will pop back into your hand if it would be put into a graveyard, making it, um, ideal for Evershrike. More importantly, with both Fallen Ideal and Mantle of Leadership attached to it, you will be able give your Evershrikes +4/+3 for each creature you can make: +2/+2 on the way in, +2/+1 on the way out. Here's where I ended up:

1 Rhys the Redeemed 3 Edge of the Divinity


Working on Your Apex

I have a little rule of thumb when it comes to evaluating Magic cards: If it costs 101 mana, it had better win you the game. I hope we can all agree on that statement. Of course, until the release of Helix Pinnacle that rule was never really put to the test. It isn't the first card that takes triple-digit mana to kill an opponent by itself. Both Searing Touch and Death of a Thousand Stings could already make that particular claim. The difference, of course, is that those two cards are nibbling away at a resource (your opponent's life total) that many, many other cards can eat away in much larger chunks. Further, if your first copy of either of those two cards only does half the job, if you only put fifty mana into it, the second copy can pick up where the first one left off. Not so with Helix Pinnacle. It's all 100 counters or nothing.

Inspired by a deck from a reader named Skander, I built the following deck using a couple other rules of thumb. One, if you need 101 mana to win the game, you'd better include some ways to generate a lot of mana. I learned that one the hard way. Two, if you're going to try to win the game with a 101-mana spell, it would be wise to avoid dying while you're still paying for it. That's as true in Magic as it is in life.

To make the mana, I'm using Cloudpost and Vesuva (searchable with both Sylvan Scrying and Scapeshift) and powering them up even further with Mana Reflection and Seedborn Muse. Skander went even further, using Gilded Lotus and Doubling Cube. To ensure that I don't die in the meantime, I've got Wrath of God, Faith's Fetters, and, most importantly, Solitary Confinement (enabled by Squee, Goblin Nabob, Gobin Nabob).

This is the kind of deck that could probably benefit from Sensei's Divining Top. Unfortunately, the Golden Rule prevents me from deploying the one-sided Shaharazad. Play 'em if you got 'em.


You can very easily build a Standard version of this deck. You lose key cards, most notably Cloudpost and Solitary Confinement, but you can still make tons of mana with cards like Mana Reflection, Rosheen Meanderer, Magus of the Candelabra, and Doubling Cube. Idyllic Tutor can sub in for Sterling Grove.

The Unbearable Awesomeness of Overbeing

It's no big secret that I'm a fan of the blue and green cards. They do just about everything I want a Magic card to do: destroy artifacts, make permanents different colours, move a counter from one thing on to another thing, the works. Mostly, though, I like to make mana, draw cards, play fatties, and abuse "comes into play" abilities. This deck has all of those things.

I started with Overbeing of Myth, a sort of Howling Mine Maro, and went from there. There are two basic card-drawing "engines" in the deck. The first involves Vedalken Mastermind (or Stampeding Wildebeests) and cantripping Gray OgreWistful Selkie (or super-cantripping Regal Force). Normally, I would use Mulldrifter, but that's been done to death (or near death), it doesn't work with Stampeding Wildebeests, and recurring Mulldrifters isn't quite as exciting when you've also got Fable of Wolf and Owl in play. The other "engine" has also been done to near death and it involves Vesuvan Shapeshifter and Fathom Seer. The cool part about this one, though, is that once you're done drawing cards, you can use your Shapeshifter to copy Overbeing of Myth. If you get low on cards, you can go back to copying Fathom Seers. Spitting Image and Tilling Treefolk combine to allow you to make Overbeings until you run out of cards, while Selkie Hedge-Mage (Man-o'-War 2.0) and Wickerbough Elder help you to deal with opposing permanents.

2 Fable of Wolf and Owl

Once again, feel free to post deck ideas in the forums or send them to me by email. I will take all of them into account before I build the final deck I take to Chicago in a couple weeks. Thanks!

Until next time, have fun guessing!