The Evil of the Thriller

(screaming in a woefully off-key voice) “‘Cause this is Thriller! Thriller Night! And no one's gonna save you...”

Oh. Ahem. Sorry about that.

The last two weeks, I have taken new Torment cards and walked through my rationale for building decks around them. This week, I again consider a Torment card. But instead of walking through the building of an entire deck, I am instead going to discuss basic card synergies.

When I see a new card, I am either struck with its implications or I'm not. If not, it's unlikely I will be featuring that card in a deck anytime soon. Instead, I tend to focus on those cards that scream out “Wow! With blahdeeblahcard, that would be AMAZING!” That exclamation -- the immediate realization of the ways in which the new card interacts with other Magic cards -- is what usually leads to new deck ideas.

Consider the following Torment card, a card that immediately got my heart pounding: 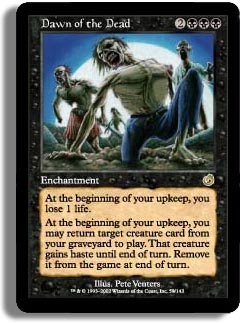 What comes to mind when you see this card? Does it seem viable? Think for a second... It's okay, I have time...

Dawn of the Dead , which I heretofore call “Thriller” in recognition of its artwork, might seem a bit unwieldy at first. It costs five mana, it drains life while on the table, and that

is sure annoying for any 2- or more color deck. Still, it's a card I think has some fascinating implications in Odyssey Block and Type 2. Why? Because of the many cards that interact so well with it.

Did any light bulbs go off when you first saw the card? For me, I had enough complimentary cards in my wee little brain that I had to get a pen and paper. Decklists followed.

Here are those initial, pre-deck ideas. I think it's useful to walk through this kind of gut reaction when evaluating a new card because, as I said, it is often the embryo of deckbuilding.

Any deck with Thriller in it seems like it should have some creatures. Otherwise it's just an expensive, slow way to kill yourself. Specifically, consider...

Fatties. Big Fatties. Bigger than that. With evasion. A card that can put creatures directly into play without paying their cost is compelling. When those creatures have haste, it seems almost too good to be true. In many ways, Thriller is like Sneak Attack . The difference, of course, is that with Thriller you can only pop one fattie into play at a time, disallowing that dirty Sneak Attack combo-kill. So maybe a fixed Corpse Dance is a better way to think of it. 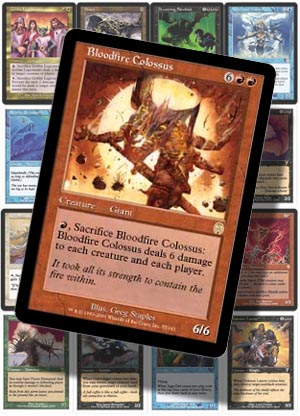 Whatever the case, there are plenty of possibilities for huge, unstoppable beats: Devouring Strossus , Draco , Phyrexian Colossus , Savage Firecat , Thorn Elemental , and a host of flying 6/6 things like the Dromar, the Banisher are probably the best because of their ability to elude (or run over) blockers. There are other fatties, like Benthic Behemoth and Tsabo Tavoc , that would sometimes be terrific, too.

Bloodfire Colossus !!!! One fattie seems particularly evil with Thriller: Bloodfire Colossus . With the Colossus in your graveyard, you have a 6/6 monster with haste each turn that can then sacrifice itself for 6 more damage without ever being removed from the game. That's 12 uncounterable damage a turn for those of you keeping score. Yowza.

Other Sacrificial Lambs… The trick with Bloodfire Colossus is so compelling that it's easy to speculate about other creatures who can sacrifice themselves before being removed from the game. From the lowly Blood Pet , Crypt Creeper , Dedicated Martyr , Diligent Farmhand , Goblin Legionnaire , Morgue Toad , Pyre Zombie , and Whirlpool Warrior to the more impressive Dromar's Attendant, Famished Ghoul , Limestone Golem , and of course Skizzik . All turn their self-mutilating tendencies into a tangible benefit with Thriller.

Creatures Who Like to Come Into Play. If a creature will rear its ugly head twice via Thriller, you might as well use that to your advantage. Critters with come-into-play effects are fun for any deck in which your creatures are reusable. Things like Abyssal Horror , Angel of Mercy , Dakmor Lancer , Flametongue Kavu , Gravedigger , Kavu Climber , Phyrexian Rager , Ravenous Rats , and Sage Owl are good examples. Foul Imp and Serpent Warrior , on the other hand, are not.

As I said, a Thriller deck needs creatures. But there are equally compelling non-creature cards since any Thriller deck must find a way to reliably get its creatures into the graveyard. Cards like Entomb and Buried Alive are obvious answers. There are other fun options to consider, too... 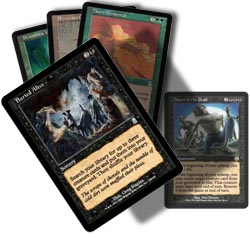 Cards That “Let” You Discard. In most situations, being forced to discard is a bad thing. If you are specifically aiming to get creatures into your graveyard to be reanimated, however, discarding doesn't look so bad. Cards like Cephalid Broker , Fact or Fiction , Jalum Tome , Merfolk Looter , Probe , and Urza's Guilt allow you to draw cards and dump creatures. Meanwhile, Dralnu's Pet , Fledgling Imp , Patchwork Gnomes , Patrol Hound , and Wild Mongrel are reasonably-costed creatures themselves that allow you to discard for neat effects. Probably the most impressive, however, is the combination of Thriller with cards like the Odyssey “Last Rites,” Meteor Storm , and Zombie Infestation . Note that Zombie Infestation is also black. Mu ha ha.

Those “Sac Creature” Cards. I mentioned earlier that using creatures who sacrifice themselves is great with Thriller because the creatures become reusable. But who needs saccable creatures when you can get rid of them yourself? If you use otherwise-dubious cards like Death Bomb , Diabolic Intent , Dredge , Innocent Blood , and Sadistic Hypnotist while Thriller is on the table, you suddenly get something for virtually nothing. Add the aforementioned come-into-play creatures and all sorts of chaos abounds. Diabolic Intent, in particular, seems like it has juicy possibilities since it allows you to search for the Thriller itself.

Reset Buttons. Finally, the nice thing about a fixed reanimation enchantment like Thriller is that you can be fairly reckless with your own creatures. Balancing Act , Obliterate , Pernicious Deed (for less than 5), Wildfire , and Wrath of God can cripple an opponent without slowing a Thriller deck down at all. That just has to be good, right?

These ideas don't represent an exhaustive list of possibilities with Dawn of the Dead , but I hope they have inspired you a little. At the very least, I hope the next time you see a new card you will begin to play the mental mix-and-match game with it to see what happens.

Finding the card synergies that will lead to a successful deck isn't easy. But I have full confidence that, um, if you keep at it, well... you'll (closes eyes) just beat it, beat it, beat it. Because, uh, "no one wants to be defeated?"

I'll go a little crazy next week, but for now here are some of my Thriller decks...