Jeremy was 13, so, naturally, I thought he was the coolest guy in the world. My brother and I brought our decks over and played Magic for hours. Looking back on it, this is probably some of the most fun I've ever had.

Fast forward 13 years: Kelly Digges asked me to write an article on the theme decks of Eventide.

I've always liked theme decks. Every time I've ever been absent from Magic for a few months and wanted to get back into it; I've picked up a few precons and played them against each other. 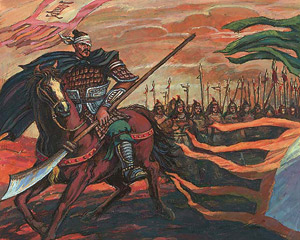 So I stared at my computer screen, not really sure what I would write about, and randomly logged onto Facebook to find this message:

A bunch of guys I work with here at Sony have started playing Magic again and I was contemplating joining them. But I haven't played since Junior High School. Any recommendations for the best way to jump back into things?

Yeah, the best way to get back into it initially would probably be to buy a couple theme decks and just play them against each other."

The great part about theme decks is that you can easily add cards to them as you draft, play Sealed, or just crack packs for fun. It's a great way to have a deck with some oomph without having to put it together from scratch. Let's take a look at the theme decks of Eventide and see what they have to offer.


I really like this theme deck. If you're cracking packs of Eventide as a newer player you can do a lot to make this strategy quite effective. If I were trying to find some commons that would take this strategy up a notch, I'd look for a four-of play set of Edge of the Divinity, some Nightsky Mimics, and a couple more Unmakes. It's important not to play fewer than 20 creatures in a deck like this, though, so make sure you don't cut too many cards that can attack and block.

If you can find them, more copies of Divinity of Pride would really make the deck awesome.

1 Spell Syphon 1 Oona's Grace 1 Inside Out

3 Clout of the Dominus

3 Riverfall Mimic 1 Spell Syphon 1 Inside Out


"Sidestep" is probably my favorite of the Eventide theme decks. I've always been blue-red mage at heart. Something about playing card draw and burn in the same deck really gets me going. I'd like to add some more efficient burn to this deck, though, so a few Puncture Bolts and Puncture Blasts would be very welcome. If you've cracked any Tenth Edition you might have been lucky enough to open a Tidings or two, and those really help the cause of a blue-red deck.

If you're looking for rares to add, you might be able to find a few Greater Gargadons that will go really well with your Dominus of Fealty and your Unwilling Recruits. I'm going to stress that you need to have at least 20 creatures again, because it's probably more important in a deck like this where you're running 3 Clout of the Dominus—super-powerful Auras that are super-terrible if you don't have targets for them.

2 Gift of the Deity

1 Savage Conception 2 Gift of the Deity


"Death March" is probably the most powerful of Eventide's theme decks. You can play with super-powerful cards like Creakwood Liege and Cankerous Thirst, and you can ruin your tapped-out opponent's day with a well timed gift of the deity on one of your hybrid creatures. Cankerous Thirst is awesome, and it probably won't be hard to find a few more of them.

I'd want to play a lot of hybrid creatures in my Death March upgrade and play a full 4 Gift of the Deity; If your opponent's strategy depends at all on an interactive combat step, then you're in for a lot of blowouts in your favor.

2 Power of Fire 2 Scourge of the Nobilis

It's important to set up big swings with your Hobgoblin-Scourge combo. You can burn or Niveous Wisps your opponent's blockers and get in the red zone for huge amount of damage in a single swing.

2 Favor of the Overbeing 1 Fable of Wolf and Owl

Superabundance is a lot of fun to play. It has so many cantrips (cards that draw a card in addition to having some effect). One of the most annoying things that can happen in a game of Magic is running out of cards. This deck avoids that by replacing many of the cards it plays. I definitely want to add another Snakeform to the deck.

It's important to bluff early and often when you're playing "Superabundance." After a game or two, your opponent will be trying to play around your Invert the Skies, your Snakeforms, and your Cerulean Wisps. If you have a 2/2 in play and your opponent has an 8/8, a lot of the time just leaving three mana open will be enough to make your opponent not attack you.

Ask and Ye Shall Receive 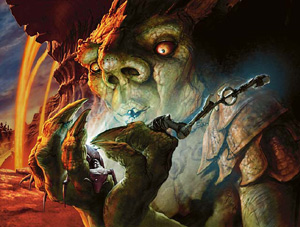 When you've just played Friday Night Magic at your local store and everyone is packing up their fresh Sealed or Draft decks after four rounds of battle, it never hurts to ask the people you've spoken to throughout the night if they have any of the commons you're looking for to fill out your theme deck. A lot of players have been playing the game for years, and these commons will just get lost in a pile of laundry, food, or empty Red Bull cans. One man's trash is another man's treasure!

Hit the forums and tell me what ideas you've come up with since the release of Eventide. I'd like to see what everyone else has been fooling around with lately. If you see me at a tournament—like U.S. Nationals, which were this weekend—stop and say hi. I'm always looking for new people to Cube Draft or get ice cream with.