Endless possibilities are a good thing… aren’t they? 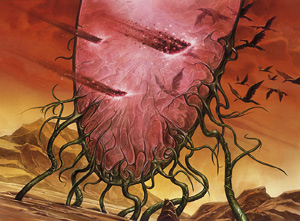 got sucked into a time vortex for today, and that same vortex deposited me here on the site instead. I waved to him as we crossed paths in the Blind Eternities, with him rocketing out toward some unknowable realm and me hurtling toward Taste the Magic, and he yelled something. Most of his message was torn away by the time-stream, but I was able to make out one phrase: “expressive power.”

I meditated on that phrase, trying to crack its meaning. Googling it just got me web sites about programming languages and other formal systems, which didn’t seem to have anything to do with Taste the Magic. It didn’t anagram to anything interesting (unless “perverse ox wipes” is interesting) and it didn’t activate any genetic circuits deep in my ancestral lizard brain.

But I figured it out. I cracked the code, and today I can enlighten you about what Matt was thinking of as he hung ten on that interplanar time-surf.

The punch line of it is this: 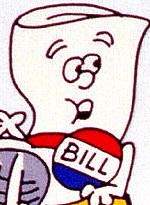 Imagine a Magic card wending its way from initial mechanics design all the way to the freshly-inked card in a booster pack. Just like that Bill (up on Capitol Hill) in the Schoolhouse Rock cartoon, it undergoes a lot of steps in the process of realizing its destiny. (And of course there’s a lot of catchy singing by Jack Sheldon.)

This column focuses on the flavorful steps of that process, for which the creative team is largely responsible. The Creative team conjures up creative themes that support and concretize the set’s mechanical themes. Design and development are planning a block swimming in artifacts? The setting is the metal world of Mirrodin. A gold block emphasizing two-color pairs? The guilds of Ravnica.

When a setting is created, the concepts that underlie it have to be able to give rise to enough details to provide flavor – name, art, and flavor text – for at least the hundreds of cards of the block (not to mention the block novels). To that end, the setting must be generative and fertile. 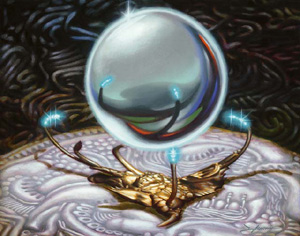 Imagine a world consisting of a smooth, featureless white sphere, empty of all life. Although it might make a good cue ball for a cosmic game of billiards, it’d be awful as a Magic setting. It has no details to provide creative grist for those hundreds of cards. It has no aerophins to lend life to the small flyers of the set, no grazing gnarrs to provide the set with fatties, no conniving mages to chant the syllables of its burn spells and disenchant effects, and certainly no characters to bring life to the novels.

Ravnica, on the other hand, has plenty of fertility in this sense – it has ten warring guilds, scheming guild leaders, a jaded civilian population, a disintegrating guildpact, a rapidly filling ghost quarter, the danger of the brooding nephilim, and more. That’s a lot of grist for the flavor mill. Thusly armed, the artists and flavor text writers for Ravnica Block had no worries that they’d run out of flavor for the cards churned out by design and development.

But can a setting be too generative and fertile? Can a world have too much expressive power? Surprisingly, the answer is yes.

Dominaria – like I said before – didn’t need alternate realities.

I mean really. It’s already an extra-large helping of planar existence simmering over the low flame of a multimillenial history – where, let’s not forget, magic is possible. Was there any worry that this storied plane wouldn’t be able to express the flavor of any card that Planar Chaos had in store for it? Would anything have made you raise your eyebrows, knowing the backdrop of the set was Dominaria, playground of planeswalkers?

Suppose we took this already heterogeneous melting-pot of archmagery, and then told you that there were now a huge number of alternate versions of it, all Cuisinarted together via the power of time gone awry? 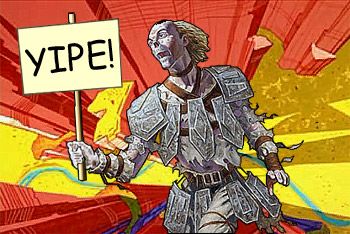 This was the Creative team’s problem as it finished up names and flavor text for Time Spiral and headed into Planar Chaos. It wasn’t that a dearth ideas of what might occur in all those alternate realities – just the opposite! There were too many possibilities. It may seem like a creative blessing for nothing to be out of the question – after all, if “it happened in one of Dominaria’s alternate realities” is a valid justification for a card concept, than what could possibly go wrong? But in truth, it’s like creative freefall. It’s kind of fun at first, but the longer you’re in it, the more you begin to feel this Wile E. Coyote sensation that you really ought to look down into the empty canyon.

If you ask me, the fun of creative work is building constraints. The best settings have rules undergirding them, guiding principles that turn creative freefall into directed flights of fancy. It was known long before it was time for names and flavor text that Planar Chaos would have this extremely generative alternate reality premise – so what constraints and standards could we put in place to make sure the setting felt coherent? 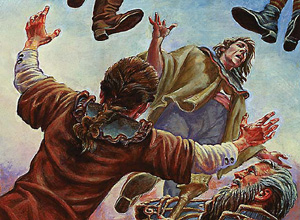 When I was a kid I had a computer game called Pinball Construction Set, published by a (then) unknown little company called Electronic Arts. It not only let you build your own pinball table, with flippers, bumpers, and springs – but also let you rewrite the laws of physics for the hapless player who stepped up to your table. I made dozens of tables on that thing. I of course explored the power trip of cranking gravity up to black-hole proportions – but pinball is actually not all that fun inside an imploding star. I turned gravity off entirely, but then there was nothing to pull the ball down toward the flippers so that you could interact, and it became an impersonal physics simulation instead of a game. So in the end, I tended to make most of my tables with normal Earth gravity. This surprised me at the time, but it shouldn’t have – pinball was of course developed in the context of normal Earth gravity, and the fun of pinball is finding out how good you can be at navigating the ball through a maze of bumpers given the harsh rules of gravity.

Planar Chaos needed its own force of gravity – a set of constraints that would rein in the cranium-detonating expressive power of alternate reality Dominaria. You’ll find evidence of this creative foundation in the concepts and flavor text for the set’s timeshifted cards. Two weeks ago Brady Dommermuth called the foundational principle Time Spiral Block Law #2b:

The concept of a Planar Chaos timeshifted card should agree with the setting of its source card.

If even a region of Dominaria (like, say, Otaria) is powerful enough to generate cards for an entire block (and Otaria generated two of ‘em!), then the entire plane is powerful enough to cannonade any amount of cardboard with rich, flavorful detail. To create a coherent pattern for Planar Chaos’s “timeshifted” cards and temper the power of their alternate-reality theme, their concepts, names, and flavor text were tied to the settings of the cards from which they “shifted.” 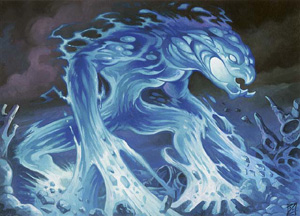 Tocasia brushed the gears and cogs from the table. There, before two wide-eyed brothers, she began a lesson on raw elemental magic.

Tocasia was the mentor of Urza and Mishra when they were young students of artifice. In the alternate reality from which Primal Plasma shifted, they became students of elemental magic instead.

Malach of the Dawn shifted from Ghost Ship, from The Dark. Its flavor text features a speaker you’ll only find on another The Dark card, Miracle Worker.

"The sun rises, but the world still feels dark. Pray for the arrival of the malachim—they'll bring Dawn to the world and to our hearts." —Sister Betje, Miracles of the Saints (Malach of the Dawn)

"Those blessed hands could bring surcease to even the most tainted soul." —Sister Betje, Miracles of the Saints (Miracle Worker) 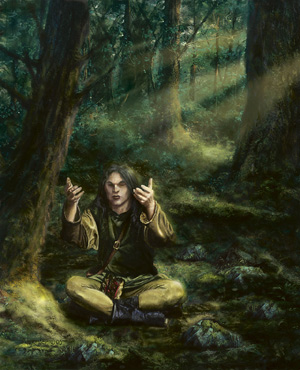 Seton is a powerful green-aligned druid in just about any reality you can conjure up. But on Harmonize, a timeshifted version of Odyssey’s Concentrate, he focuses not just on mana generation but on card drawing. Alternate Seton would be a potent ally:

You’ll recognize Simian Spirit Guide as a timeshifted Elvish Spirit Guide, from Alliances. In this reality, task mages like Jaya Ballard used ape spirits instead of elvish ones to guide their spells – but no matter where you timeshift from, Jaya is still Jaya.

Planar Chaos is a lesson in expressive power. Not enough of it will starve any creative endeavor, but too much of it can be just as much of a challenge. Read some pieces of flavor text in the set and I think you’ll agree that Planar Chaos represents a clever balance between the two.