Pawel Karaszewski is one of the best Polish players, having taken part in several Pro Tours as well as a few European Championships and Worlds. He is also a two time Polish National Champion. He is here today with a UGR Beatdown deck. His opponent is a fairly unknown local player who chose to play UBG Control. The winner gets to play in day two. 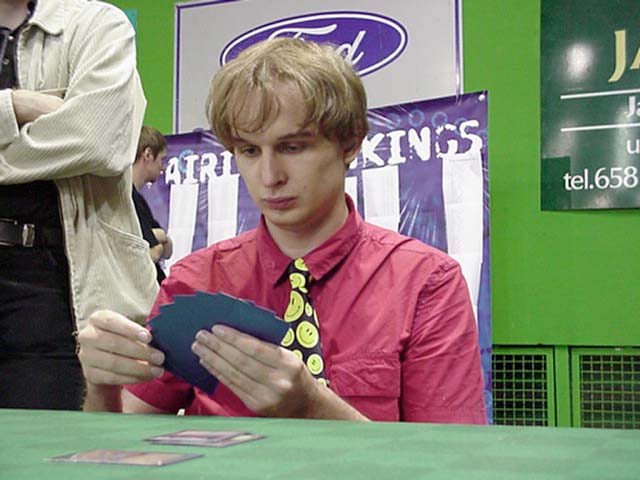 Karaszewski won the roll but had to mulligan. He opened with a Kavu Titan, while his opponent turned up with a creature of his own - a Blurred Mongoose. Wiktor chose to trade it for the Titan, so Pawel simply summoned a Mongoose of his own and proceeded to swing with it. He got mana screwed. His opponent, however, missed land drops as well. Pernicious Deed was played on Wiktor's side and Pawel just kept attacking. His hand contained eight cards at the end of his turn forcing him to discard, after long thought, a Flametongue Kavu. Nguyen Lobotomized Penumbra Bobcats out of Karaszewski's hand, but it made no difference as the reigning Polish Champion wasn't able to draw another mana source. Despite the Deed, Karaszewski played a Kavu Titan rather than choosing to discard a card. The bears were blown away by the Pernicious Deed and Karszewski's next play of Gaea's Skyfolk was Undermined. Wiktor countered the second one with a Mystic Snake and proceeded to administer beatdown with it. Pawel finally drew his third land but had to sit and watch the game from behind his handful of cards. He was finally forced to start discarding again, this time Repulses. He slammed down a topdecked forest but still did not make his play, allowing his opponent to take him down to 5. When his try to cast Flametongue Kavu was Undermined, he conceded.

Wiktor sided in some Vodalian Zombies while Pawel put in four Gainsays and some Disrupts removing Repulses, among other cards. 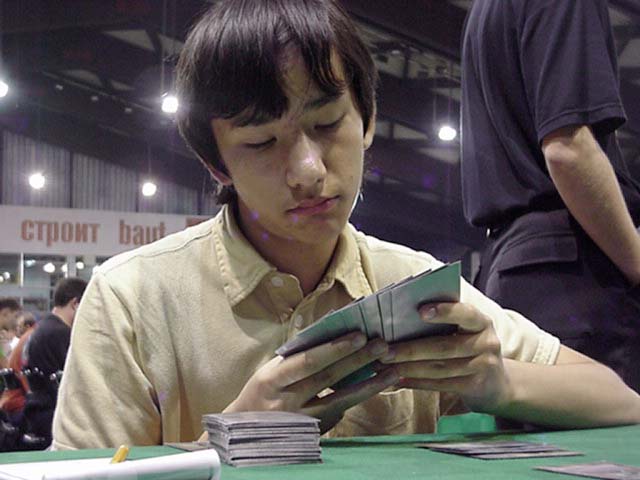 Karaszweski Iced Wiktor's land on his upkeep and made a Kavu Titan on his own turn. He started to bash his opponent with it, then Disrupted Wiktor's Fact or Fiction. The Titan did 8 damage before Nguyen cast a Vodalian Zombie, Excluding the Mystic Snake that was cast to counter it. Pawel summoned a Penumbra Kavu, but it looked bleak compared to a Spiritmonger cast on Wiktor's turn. The big fatty took Karaszewski down to 14 as he couldn't do anything except chump it with the Penumbra Kavu. He swinged with the token but Nguyen's attack phase was a lot more painful as the Monger did 7 damage. Token again made a trip into the red zone, but Karaszewski still had no answer to the Monger as he sided out his Repulses. Instead, he aimed for his opponent's head with a Prophetic Bolt, which Wiktor calmly countered with a Mystic Snake. After having tapped the beast for the final attack, Karaszewski had no other option but to scoop.