These players were both on 5-2 going into the final round of day one, which meant that the winner would be playing day two, while the loser could go home. "This is a pretty bad match-up for me," bemoaned Craig, "Pierre has a Sabertooth Nishoba which I can't really deal with." 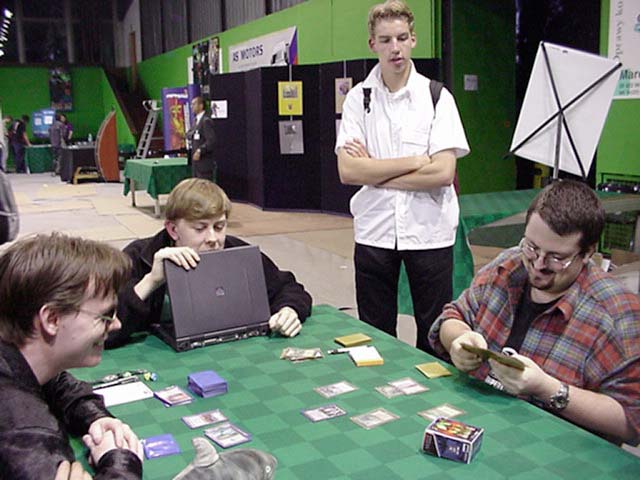 Craig got stuck on only three lands while Pierre had the chance to develop his mana-base with Fertile Ground. The Englishman had to counter Destructive Flow, and he found his fourth land on the next turn, allowing him to play a Lightning Angel and start the offence, but Pierre reduced him to one land with Global Ruin. Still, as Craig pointed out, "the Lightning Angel might go all the way."

Pierre went down to 8 while he struggled to find a way to deal with the Angel, and his Collective Restraint meant that it would cost more mana to attack with the Angel than Jones had in play.

Malherbaud continued to gain control with a Fact or Fiction, while Craig was reduced to discarding as he had only three land in play. Global Ruin put paid to two of those, and an Implode left Craig with no land at all. Jones still had one permanent though, and conceded when even his Angel succumbed to a Lightning Angel.

Jones brought in his 'tech' Planar Overlays in place of useless Urza's Rage, while Pierre took out some of his land destruction for more creatures.

Craig made an error of judgement straight away in game two, by not playing his Planar Overlay on turn three. This gave Pierre the chance to cast Destructive Flow which basically won the game straight away. With his non-basic lands completely shut down, Jones couldn't ever gain anything from his Overlay. Even though the Overlay would have returned one of Craig's own lands, as Pierre went second it would have meant that he must discard two cards as there was nothing he could cast so cheaply, and Craig's Lightning Angel would have entered play while Pierre only had two lands in play, giving him at least a fighting chance.

As it was, however, Craig had to sacrifice his non-basics, and Pierre Imploded one of his basic lands, putting the Englishman out of his undoubted misery with a Rakavolver and then a Rith, the Awakener.

2 Lay of the Land 2 Chromatic Sphere