Leading the field coming into this round, these players were already on the verge of qualifying for the top eight. Felix is one of the handful of German players who made the trip this weekend, while Alex is one of the best known Russians, as he has travelled to Grand Prix around Europe in the last season. 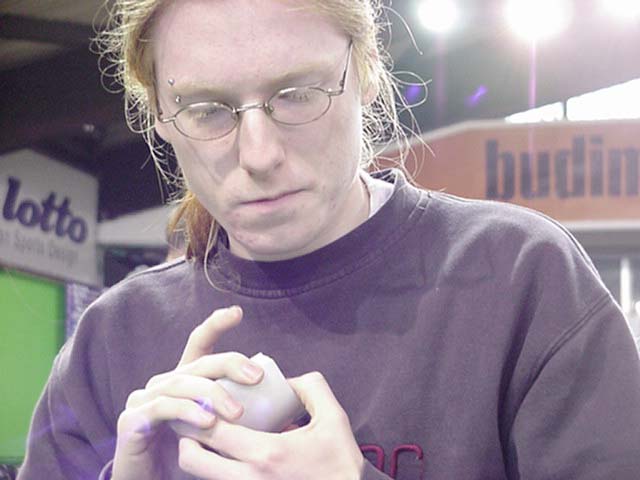 Schneiders cast a Nightscape Familiar, but Strakhov's Vindicate meant that he was suck on two land, although Alex himself only had three. They found land quite quickly though, and it didn't affect the game.

When Felix attempted to Recoil another of Alex's land, Strakhov Disrupted it twice and took advantage of Felix being tapped out to Dromar's Charm the Nightscape Familiar, clearing the board.

The Russian played a Meddling Mage, and this remained the only creature on the table for several turns, and stopped Felix from casting the Prophetic Bolt in his hand. Eventually Schneiders removed it with an Urza's Rage, but it was replaced by a Spectral Lynx.

Now the German managed to force a Lobotomy through, using a Spite to counter Alex's Absorb. The Lobotomy showed that Strakhov had three more Absorbs in hand, and of course Felix took those. Strakhov's other cards were Yawgmoth's Agenda, and Lobotomy.

The Lynx continued to hit, bringing Felix down to ten, while he searched for answers with Fact or Fiction, finding a Repulse. Now Felix had to make sure he kept the Agenda off the table. He cast Void for two, permanently getting rid of the Lynx and a Gerrard's Verdict. At this point Alex conceded, a trifle prematurely as it seemed. 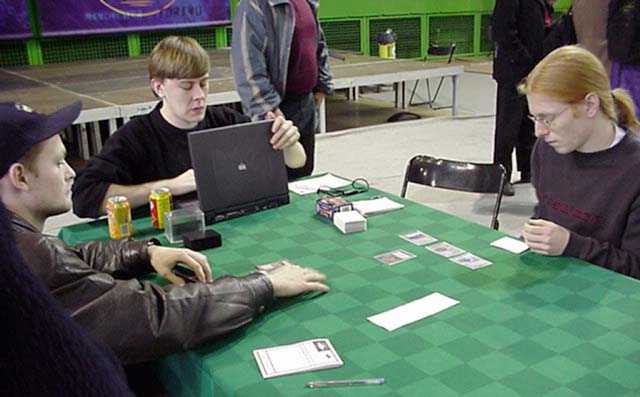 Strakhov had to take a mulligan in game two, but nevertheless he played a turn two Spectral Lynx. Felix wasn't bothered about the Lynx, as he had an Emblazoned Golem. Alex took the chance to Lobotomize Felix while he was tapped out, taking the Fact or Fiction but leaving Undermine and Prophetic Bolt.

Felix attacked and played a second Golem that he had plucked off the top, putting the Russian under some serious pressure. Strangely Alex decided to name Undermine with a Meddling Mage, when he knew that Felix had Prophetic Bolt and he had no way to stop it.

Looking for some way of stopping the Golems, Strakhov cast Fact or Fiction, and netted a second Spectral Lynx. This didn't look to be nearly enough, as he was only on nine life, and Felix played a third Emblazoned Golem. In desperation Alex played a Yawgmoth's Agenda, and took a further five damage going down to four. This let him play the Dromar's Charm out of his graveyard, so that he could double-block one of the Golems and stay on four life.

The board position was Alex on four life with two Spectral Lynxes and a Meddling Mage, and Felix with two Emblazoned Golems and a Nightscape Familiar. Strakhov was annoyed that Felix had top-decked Gainsay just before he had chance to cast the Fact or Fiction.

Both players continued to draw land, and Alex's graveyard was exhausted, so the players spent several turns doing nothing, but Felix managed to find a Repulse, and force it through with an Undermine since Alex could play only one spell per turn.