You will already have seen how Yuri and his W-U-R deck made it through. Craig is just entering the Grand Prix after having had three byes. He is also playing W-U-R but a more unusual one, with Sunscape Familiars and Lightning Angels as the creatures. 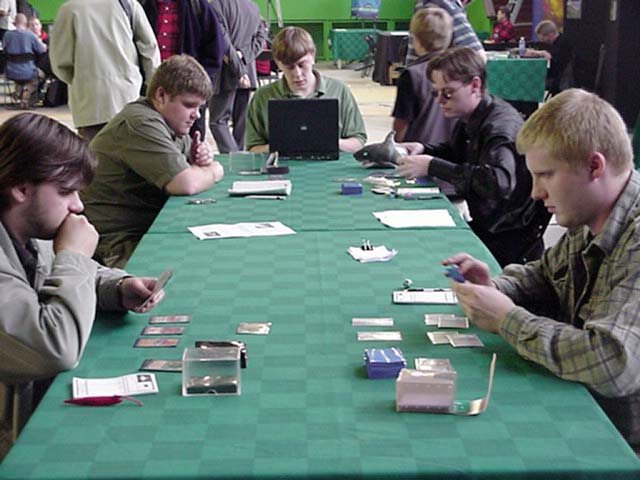 Craig had to mulligan an opening hand containing Battlefield Forge as it's only land. Yuri's decision was a little more difficult as he had two lands and was going second, but he chose to mulligan as well as he had no white mana for the two Galina's Knights in his hand. His six cards didn't contain any land at all, so he probably regretted the choice. Eventually he kept a five card hand that was very similar to his opening draw, but with one less land.

Yuri missed a land drop on his second turn, but Craig only had Repulses and Ices, so he couldn't really take advantage. He Absorbed Yuri's attempt to play a Galina's Knight, but a second one resolved.

The Knight attacked until Craig to Repulsed it, as he wanted to have an Exclude to counter it if Yuri replayed it. By Icing Markin's two blue sources - he was still stuck on four lands - Craig managed to get a Lightning Angel into play. Jones used his Exclude on Yuri's Angel, and finished the game with Prophetic Bolt and Angel attacks, as Markin didn't have enough mana to get a spell through the Englishman's defences.

Of course Yuri sideboarded in his four Gainsays again and Craig took out his Absorbs, Goblin Trenches, and Evasive Actions for Gainsays, and Flametongue Kavus which are good against opposing Angels in this match. He also brought in two Rakavolvers in the hope that Yuri had reduced his number of Excludes.

Once again both players had to mulligan. Yuri's six-card hand was bad as well, with a Coastal Tower as his only land, and he had also drawn two Aura Blasts after Craig had taken out both of his Goblin Trenches.

Nevertheless Yuri managed to draw land for a couple of turns and both players managed to get to three land before doing nothing for a while. Even with three land Yuri could force through a Meddling Mage, by Icing one of Craig's lands, and then Disrupting his Gainsay.

The Mage prevented Jones from summoning his Lightning Angel, but he did get a Sunscape Familiar to slow down the assault. Markin brought out a Goblin Legionnaire and continued to attack. Without enough land, Craig found his attempts to Prophetic Bolt persistently Disrupted, and Craig died as much to damage from his own land as from attacks by the Meddling Mage. 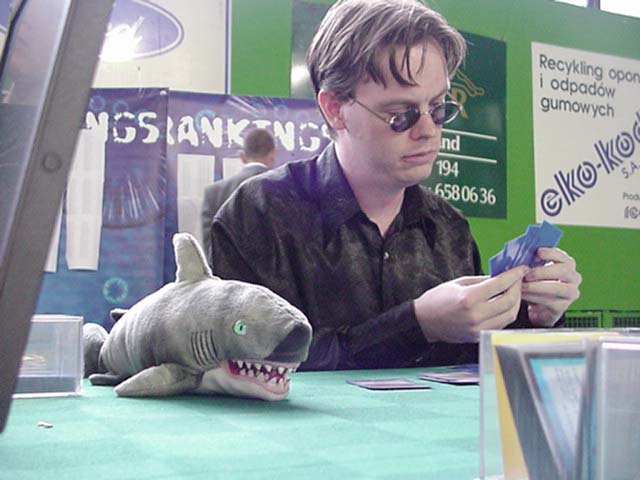 I was slightly surprised that Craig didn't bring some countermagic back in, particularly the Evasive Action as they seem quite good when you are going first.

For the third time this match, Craig's opening hand was rather dubious, but he kept this one, and it worked out for him as he drew the Mountain he needed to get all three colours of mana.

The early game was rather empty of spells, apart from a Sunscape Familiar on Jones's second turn, and he added a second Familiar a few turns later. The first real threat of the game was Yuri's Meddling Mage - but it was Excluded. By the time Craig played a third Wall there were only about eight minutes left in the round, and not one relevant card had really been cast. In mortal terror of Exclude, and without counter-magic to back it up, Yuri decided to discard Galina's Knight rather than cast it. Only a Prophetic Bolt from Craig elicited any sort of interest, as Yuri won a counter war by two Gainsays to one.

With a handful of ineffective Aura Blasts, and Disrupts, Yuri let a Rakavolver resolve. Perhaps he should have tried an Ice on one of Craig's lands, as the top card of his deck was an Absorb. Craig cast another Prophetic Bolt, and Yuri Absorbed it, and then Disrupted it. A rather bizarre order to cast the spells as it meant he didn't gain any life after Craig chose not to pay the mana for the Disrupt.

Nevertheless Markin didn't have an immediate way of killing the Rakavolver, he could only play a Meddling Mage naming Absorb to protect an answer if he drew it. Time was called but the Rakavolver was large enough to end the game in Craig's final turn.