Both of these players are from Hungary, and they're probably the best players from that country, although Gabor has had better results on the Pro Tour. This match is the Domain mirror, so it could all come down to someone being decked. 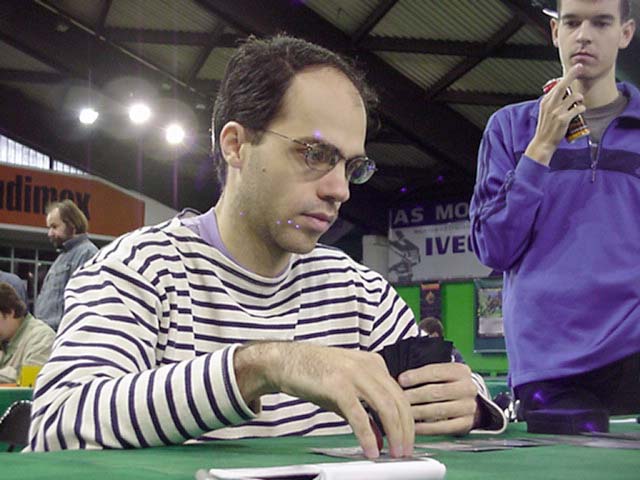 The early game saw both players developing their mana base with Chromatic Spheres, Lay of the Lands, and Harrows. Zsolt went first, which meant that he got to five mana before Gabor. Papp hadn't drawn any Evasive Actions and had to watch as Tokoli drew four cards from a fourth turn Allied Strategies. Zsolt played a Destructive Flow as one of Gabor's four lands was a Llanowar Wastes.

Papp could use it once before it disappeared and he went to fetch the full Domain with a Harrow. He still hadn't drawn an Evasive Action though, and Zsolt resolved another Allied Strategies, again for four cards as he still hadn't found a Plains. Papp tried for a Strategies of his own, but of course after having drawn so many cards, Zsolt was there with the counterspell.

Realizing that he was in control, Tokoli resolved an Ordered Migration, putting five 1/1 flyers into play, and countering a second Strategies in Papp's turn, and attacking for five damage. Papp was obviously hoping that Zsolt didn't have an Action for his Void, which he'd need to clear the flyers away. Tokoli took away that last hope when he played Yawgmoth's Agenda, giving him access to the two Actions in his graveyard. Two turns later, Papp conceded.

That was a fairly quick game for Domain on Domain, ending in only twenty-three minutes. The problem for Papp is that it's almost impossible to win two games quickly.

They sideboarded out cards that aren't any good, like Collective Restraint, Global Ruin, and Destructive Flow, for cards that would do something at least, Penumbra Bobcat, Addle, Spiritmonger, and the second Legacy Weapon. 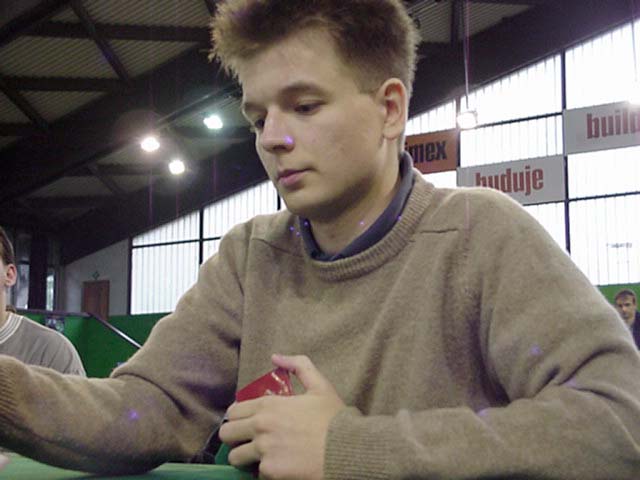 Gabor had to mulligan a hopeless hand containing a solitary Plains as it's only land, and Zsolt had to think for a while before keeping a hand with an Island and a Swamp that I would have mulliganned.

He drew an Addle and played it naming green, but Papp's cards were all blue, Worldly Counsel, Allied Strategies, and Evasive Action. While Papp found lands with his search cards, Tokoli had to Worldly Counsel for two to find a Forest of his own.

Papp only had three different types of basic land, so his Allied Strategies wasn't as good as it could have been, and while he was tapped out, Zsolt dropped a Spiritmonger, which was immediately Voided. The Void also got rid of an Allied Strategies from Tokoli's hand, but it revealed that he had a Rakavolver, which entered play immediately.

Gabor was unhappy about the pace of Zsolt's play, and a judge told him that he must play faster, as at this point there were only eleven minutes left in the round. As Zsolt had only had enough mana to pay the white kicker, a Spiritmonger held the Rakavolver off more than adequately.

Papp needed to get some damage in, though, as a standoff wasn't doing him any good at all since he was one game down in the match, and he played Pernicious Deed to get rid of both the Rakavolver and Zsolt's Collective Restraint, and clearing a path for his Spiritmonger.

Zsolt didn't have any way of dealing with the Spiritmonger, and Papp took the second game with around five minutes left in the round.

With only four minutes left to play when this game started, there was almost no chance of a result, but both players played third turn Bobcats in an attempt to get the damage in quickly enough.

Tokoli's Cat was countered, and both players played two Harrows in their fourth turn, which ate a lot more time out of the round. Tokoli played a Rakavolver with both kickers, which would be just big enough to win the game in the extra turns, and then followed it up with a Legacy Weapon.

Even Papp's Spiritmonger wasn't big enough to dissuade the Rakavolver from attacking since each of it's attacks would net Tokoli five life. However, Papp cast Void for three, killing the Rakavolver, and the match ended in a draw.