Yuri Kolomeyko is the second best known Ukrainian player after Alex Shvartsman. He finished in the top eight of Pro Tour Barcelona this year and followed it up with a good Worlds' finish. His deck of choice today is a GR aggro. The best finish for Radek - Gromko's short name in Poland - was in the top eight of Grand Prix Porto. He also reached top eight at this year's Polish Nationals and hopes for the best with his UWR Angel deck. Both players have to win to get to day two, so it's an all-or-nothing match. 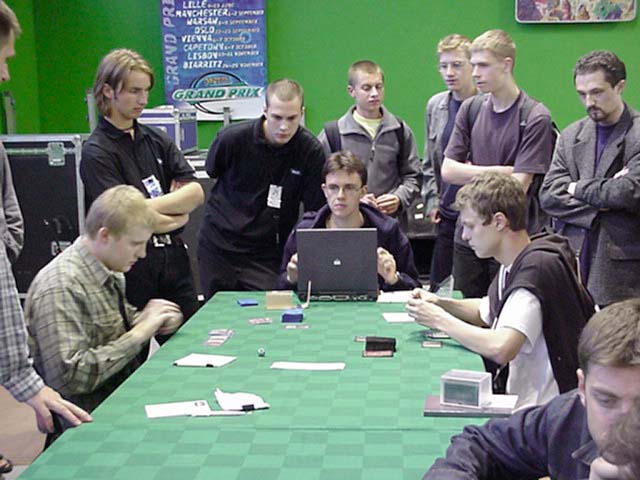 Radek won the roll and elected to play. He took a deep sigh looking at his hand but kept it. He opened with a quick Meddling Mage naming Thornscape Familiar. Yuri wasn't able to make a turn two play, so Gromko attacked with the Mage and passed. He then played Lightning Angel and took Yuri down to 13. The Ukrainian killed the Angel with a Flametongue Kavu. Radoslaw just made another one and attacked with both creatures. The Mage was blocked and died. Kolomeyko was finally able to make a Thornscape Familiar, then a Raging Kavu and attacked with it straight into the Angel's waiting arms, apparently trying to bluff a Giant Growth type spell as he only had green mana untapped. Radek did not fall for it however and blocked. He summoned Skizzik with kicker and attacked again putting Yuri into misery and making him scoop after he had seen his next card.

Radek sided in some Rakavolvers and a Jilt while Yuri went for a card advantage plan putting in some Flametongue Kavus, making room for them by removing two Thornscape Familiars.

Yuri kept his hand, but Gromko was forced to take a mulligan. The first play was a Thornscape Familiar, which attacked unblocked next turn as Gromko was unable to make a creature. Kolomeyko's hand was apparently out of 'two drops' as he did not summon another bear. Radek forbade the Flametongue Kavus with his Meddling Mage, but Kolomeyko's hand seemed still full of gas as he attacked with the Familiar and the newly cast kicked Skizzik. It did not live long, however, and was Raged. The table was clear again as both bears traded. Another Familiar entered play. Gromko matched it with a Goblin Legionnaire that was then slain by a kicked Thornscape Battlemage on Ukrainian's behalf but managed to sacrifice itself burning the Familiar. After having swinged with the Battlemage, Yuri cast a Blurred Mongoose forcing Radek to search for the answers with a Prophetic Bolt. He found one in the form of a Goblin Legionnaire. Kolomeyko's try to Rage it was thwarted by a kicked Jilt, bouncing back the Goblin and killing the Battlemage. Gromko sliced a Skizzik off the top and played it with kicker only to see it Raged. Now it was Yuri's time to topdeck the hasted elemental and a lonely Legionnaire was not enough to save the Pole when it entered the red zone.

Gromko started with a Goblin Legionnaire, which Yuri matched with a Kavu Titan. The Kavu was Fired on Radek's main phase and the Goblin dealt its damage. Kolomeyko caught his opponent off guard with a Raging Kavu. Another Legionnaire entered play, so Yuri had to face two Goblin Fanatics-on-steroiods. He attacked with the Kavu again and summoned a Jade Leech. Gromko played Goblin Trenches and passed with two lands untapped. The Little Goblins were not enough, however, to stop a kicked Skizzik and a huge attack for 13 damage headed at Gromko's dome. He chose to block the Leech and the Skizzik with his Legionnaires and sacrificed one of them to deal lethal damage to the elemental while another one burned Raging Kavu. The Pole tried to break the stall by Repulsing the Leech, but it was replayed along with a lowly Thornscape Familiar. Galina's Knight was cast to fight the green menace. The Leech was again Repulsed and made way for the table unbothered as Gromko was tapped out. Still, Radek's play of Rakavolver with both kickers made his opponent sigh deeply. The Leech's attack was blocked by the Knight, while Familiar put the Pole on 6 as he chose not to block it, fearing a burn spell. Yuri made another Leech but it made no difference - Gromko had a large supply of chump blockers owing to the Trenches. Along with a Fire, Volver put Yuri on 4 while gaining life for the Pole. Radek finished his opponent off with a well-aimed Prophetic Bolt.