Pierre Malherbaud is the two-time French Champion and came twenty-seventh at this year's Worlds in Toronto. Most people who can name a Ukrainian Magic player would probably say Alex Shvartsman, but that's cheating, and Yuri burst onto the scene with a top eight finish at Pro Tour Barcelona, back in May.

Yuri is playing the old-school red-green speed deck, and Pierre has a more original deck, combining elements of both land destruction and Domain. 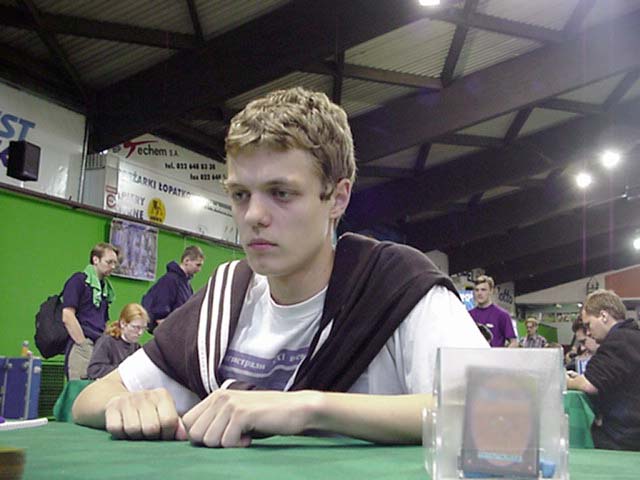 Yuri obviously doesn't like this match-up, as he shook his head and sighed as early as turn two, when Pierre played a Fertile Ground on his Swamp. Kolomeyko's hand wasn't too good either, as it had only burn spells and no creatures.

Pierre's third turn Harrow allowed him to play a Sabertooth Nishoba on his fourth turn. With no creatures large enough to block it, Yuri had to concede fairly soon after, as he couldn't find anything Kavu Titan sized to be able to trade.

Pierre brought in more sizeable creatures, taking out the pointless Destructive Flows for Rakavolvers and Rith, the Awakener. The Ukrainian brought in some Masks of Intolerance. 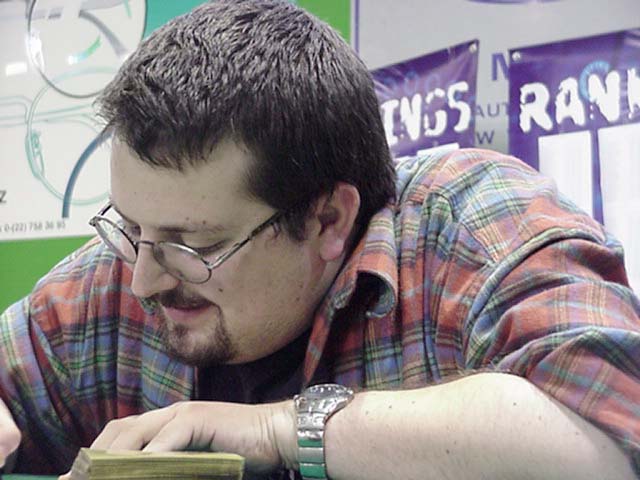 Pierre had to mulligan a one-forest hand, and at least Yuri's draw was a little better this time. He summoned a turn two Thornscape Familiar, and followed it up with Raging Kavu allowing him to attack for three on the third turn, and then a turn four Skizzik putting Pierre on five life. Even a Collective Restraint wasn't enough to help, as even though Yuri didn't have a fifth land and Pierre had the Domain, the Ukrainian did have a Thunderscape Battlemage to destroy the enchantment.

Pierre managed to find an early creature of his own this game, and his 2/3 Emblazoned Golem slowed Yuri down immensely as he only had two 2/2 Kavu Titans. The Frenchman then followed up with a slightly larger Golem on his fourth turn.

Kolomeyko played a Jade Leech hoping to at least get rid of the larger Golem. Pierre then killed one of the Kavu Titans with a Flametongue Kavu. Yuri used Ghitu Fire to kill the larger Golem, and attacked with his Leech, which Pierre had to lose both of his creatures to kill.

This attack cleared the board of all but Yuri's Kavu Titan, but Pierre tilted the game his way once more with Rith, the Awakener, and then a second Flametongue killed the other Kavu Titan. Yuri played a third Kavu Titan, this time with kicker, but he had no way of stopping the Dragon, and the match went to Pierre.

2 Lay of the Land 2 Chromatic Sphere