Stefano Fiore has already been featured in this event, he's playing G-U-R, and Johan, one of the many Swedes to make the second day, is playing No-Mar. 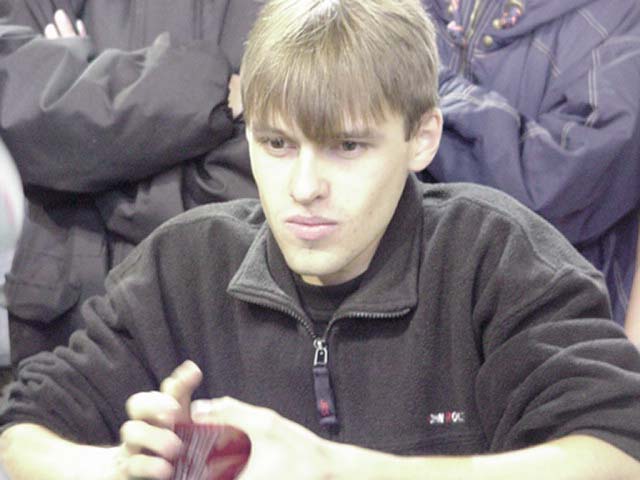 Playing first, Stefano kept a dubious hand with no green mana, only a Shivan Reef and an Island, and the gamble didn't pay off as he hadn't drawn another land by turn three and had to miss a land drop.

He only missed one as he found a Shivan Oasis straight away, but this meant he had to wait another turn before playing any sort of threat. Meanwhile Johan's draw had been reasonable, and he played a Spectral Lynx, being careful to keep black mana open for regeneration when he did so.

With only the one green mana available, Johan enforced the mana screw by Vindicating his Shivan Oasis, and leaving Stefano unable to cast any of the creatures in his hand. He didn't have enough mana for Fact or Fiction, either.

Franzen played a second Spectral Lynx and started to attack, while luckily for Stefano he had finally drawn a second green source, and played a pair of Blurred Mongooses. Even though he was now outnumbered by three creatures to two, Johan was enough ahead in the damage race that he could afford to attack.

Stefano swung back with all his creatures and tied the game at eight life each. Surprisingly Johan didn't do anything apart from attack with his Lynxes, meaning that he would be in trouble if Fiore had any sort of damage-dealing card in his hand. In Johan's end step Stefano resolved a Fact or Fiction, netting him both Prophetic Bolt and Fire/Ice. 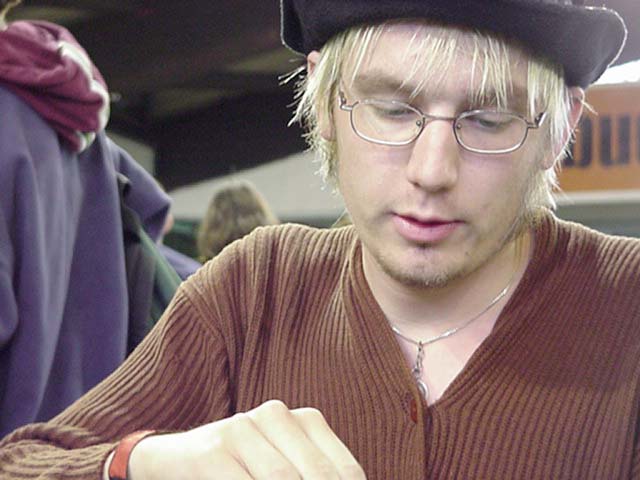 This time Stefano did have green mana, allowing him to bring out Blurred Mongoose on his second turn, and Johan played a Meddling Mage preventing Urza's Rage from being cast.

Fiore's only green mana was a Yavimaya Coast, meaning that he had to take a point of damage every time he cast a creature. The Mage and the Mongoose traded, and were replaced by two more bears; Fiore's Kavu Titan and Franzen's Galina's Knight. Stefano added a Gaea's Skyfolk, which was Repulsed before being played again.

Fiore played a third bear, this time a Blurred Mongoose, and put Franzen on the back foot. He had to Dromar's Charm the Skyfolk to stem the tide. With only four lands in play, Stefano unsurprisingly found his Fact or Fiction Disrupted.

Johan blocked the Mongoose with his Galina's Knight, and attempted to Repulse it after damage went on the stack, but Stefano countered that with a Mystic Snake, leaving Johan with nothing, and Fiore with a Kavu Titan and the Snake.

Johan cleared the board with a Dromar's Charm and a Vindicate, before playing a Stormscape Apprentice. This left him with an empty hand, though, and Fiore took advantage with a Fact or Fiction.

This gave him enough burn spells to kill Johan with an Urza's Rage and a Prophetic Bolt.

Only eleven minutes were left in the round when this game got under way. Johan went first but because of his coming-into-play-tapped lands, it was Fiore who got the first bear. His Blurred Mongoose stared at Franzen's Spectral Lynx.

Fiore played a Kavu Titan and tried to Repulse the Lynx, but it was Gainsayed. Johan had missed a land drop and Stefano obviously thought he was in control, playing a Gaea's Skyfolk at lightning speed and trying to hurry Johan, especially while the Swede was considering how to split the piles for Fact of Fiction.

Johan played Meddling Mage, choosing Prophetic Bolt, and Fiore played Fire to tap the Lynx and deal one damage to Johan, allowing him to attack with all his green creatures and get through five damage, but Johan used Slay and Dromar's Charm to clear the board.

With time running out on the round, Fiore tried to win with a Gaea's Skyfolk, but there wasn'tenough time in the round, and in fact Johan started to gain control with Stormscape Apprentice and a Meddling Mage when time was called.