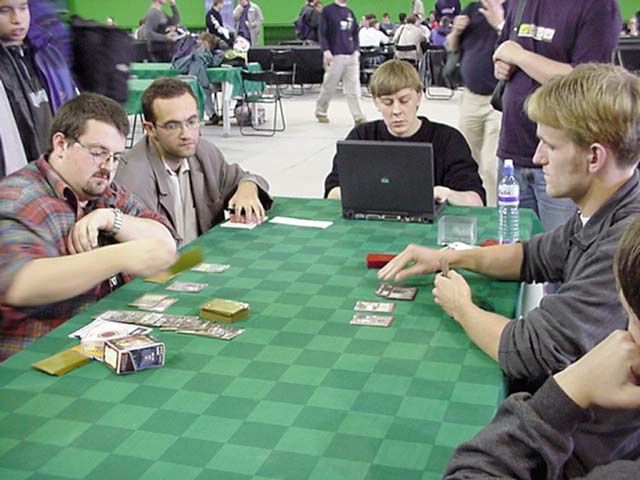 This is actually Mattias' first feature match of the weekend. You may remember him from the top eight of Pro Tour New York 1999, where he played Rebels along with everyone else in the tournament. Amazingly this is his first Day Two of a Grand Prix, although he has made Day Two in more than half of his Pro Tour appearances. Hopefully you know who Pierre is now, as this is his fourth feature match of the weekend. In case you missed it the first three times, he's the two-time French National Champion, and made top eight in Grand Prix London, playing the same deck as he is here, last weekend.

Both players had to take an initial mulligan, but Pierre wasn't satisfied with his six card hand either, and went down to five. Both players narrowly managed to avoid discarding as they found land just in time. Pierre played a Fertile Ground on his Forest, and Kettil used the topdecked Recoil to get rid of it.

Kettil was recovering better, getting up to four lands, while Pierre only had three. While Malherbaud Harrowed, Kettil cast Fact or Fiction, giving the Frenchman the very difficult choice of Probe, Desolation Angel, Spectral Lynx, Gerrard's Verdict, and a land. He got the Lynx, Verdict, and Land.

Malherbaud twice attempted to cast Dwarven Landslide, but both times it was countered with Dromar's Charm. Then Kettil tapped out to cast Probe with kicker, giving Pierre the chance to play Destructive Flow. Unlike some decks the Flow isn't an automatic win against the Swede, as he is playing Recoils, and Vindicates.

Even though the Flow destroyed two of Mattias' non-basic lands before he finally got rid of it with a Recoil. Due to all the Fact or Fictions, and Gerrard's Verdicts that Mattias had been casting, he had massive card advantage on Pierre at this point. Malherbaud finally had to scoop when Kettil played a Yawgmoth's Agenda, as he had more than enough Dromar's Charms and Vindicates to take care of everything Pierre could ever cast.

Fortunately, neither player had to take a mulligan this time, and Pierre got a large mana-advantage, by Vindicating one of Mattias' lands, and Harrowing out two of his own.

Even so, he wasn't able to gain much of an advantage since he had drawn expensive spells. Kettil discovered this when he Lobotomized Pierre to find Fact or Fiction, Sabertooth Nishoba, Rith, the Awakener, Global Ruin, and Collective Restraint.

With only one non-basic in play, Kettil wasn't especially bothered about the Global Ruin, so he took the Fact or Fiction. Pierre was hoping to draw a land as he only had five in play, but instead he drew a Rakavolver and played it as a 4/4 Spirit Linked monster.

Pierre did use his Global Ruin as an expensive Vindicate on Mattias' Dromar's Cavern, so Kettil Recoiled the Rakavolver in response, leaving the board completely clear. Now the Swede started to assert control by Dromar's Charming an attempted Rith, and then Vindicating Pierre's solitary Plains.

This left Malherbaud unable to pay either the white kicker on Rakavolver, or his Sabertooth Nishoba, and so Mattias went on the offensive - playing a Spectral Lynx. Malherbaud did immediately topdeck a Lay of the Land, fetching a Plains, and replaying his Rakavolver once again with the white kicker. Mattias then played an Agenda, giving him access to Vindicate, Dromar's Charm, and Recoil, as well as a few lands.

The Sabertooth Nishoba was the first to go, and then the Rakavolver got Recoiled, before Pierre Vindicated the Agenda. By this point it was too late, as Mattias Verdicted away his opponent's last two cards, and then played a Phyrexian Arena. Easily able to deal with everything Pierre could play, the match went to Mattias.