Both of these players made top eight in the last Eastern European Grand Prix - in Moscow back in April, where Yuri was third, and Eugeny fifth. The two are firm friends and playtest regularly so they found it amusing that they have travelled so far only to be paired against each other straight away. 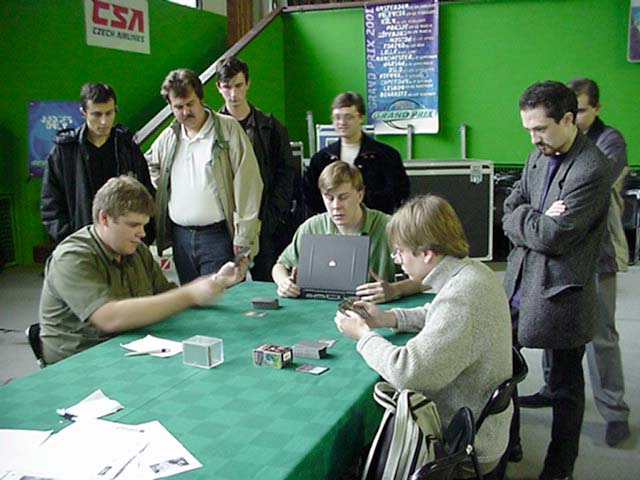 Both players played at an absolutely blinding pace, hardly stopping for a second's thought at any point, which could certainly lead to mistakes.

Yuri started and neither player did anything until turn four, where Yuri had chance to play a Lightning Angel. Eugeny didn't have the mana to counter it as he had drawn only come-into-play-tapped land. The Angel hit three times until it was removed by a Rout.

It was immediately replaced by a less brutal Goblin Legionnaire, and Okin stabilized with a Spectral Lynx. Curiously Markin chose to fling the Goblin at Eugeny, putting him on nine with two Prophetic Bolts in hand. Markov played one of the Bolts immediately, but this left him tapped out and Okin took advantage of this with a kicked Desolation Angel. With no way of casting the burn in his hand, Yuri succumbed to the Angel and the Lynx three turns later. 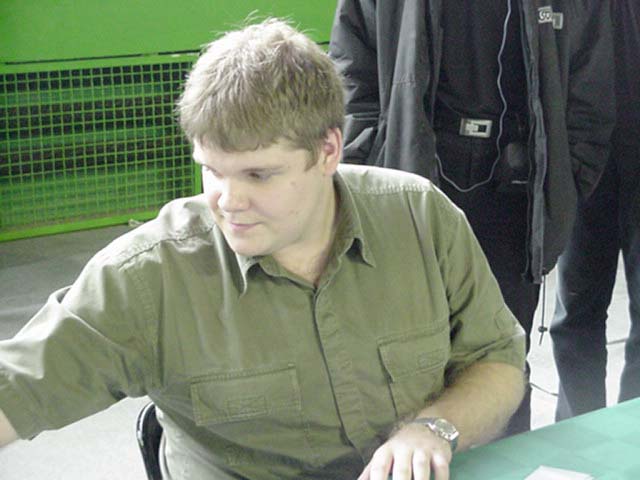 Yuri brought in a full complement of Gainsays, as did his opponent. Markov completed his sideboarding with a Disrupt, while Okin had two Lobotomies.

Markov took advantage of his opponent's slow start in the second game, by playing a turn two Meddling Mage. Okin had to play a Dromar's Cavern on the second turn as it was his only other land, but his Spectral Lynx was Fired.

The Mage was removed with Vindicate and Markov played a Legionnaire, keeping only one creature in play at a time. Okin had a hand full of Gainsays which he hadn't been able to use, and his attempt to Fact or Fiction was Gainsayed, as the Legionnaire continued to hit for two a turn.

Yuri won another counter-war over a Lobotomy, and ended the game with Skizzik. 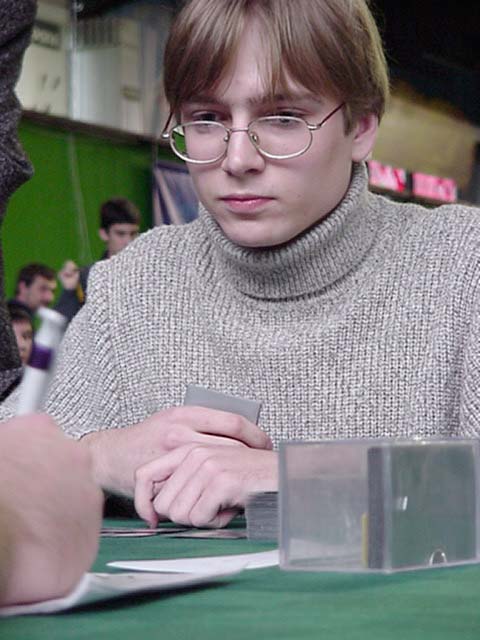 Both players had good draws in the third game, with bears on the second turn from each. Okin had started and gained tempo advantage with his third turn Vindicate. He should have attacked with his Lynx first though, as the Vindicate tapped him out and he chose not to block Yuri's Legionnaire.

As it happened he gained little from the Vindicate because he had to play a Dromar's Cavern as his fourth land. Removing the Goblin with Dromar's Charm caused Yuri to play a second Legionnaire and a Galina's Knight as well. With the Lynx not attacking the game went through a period where both players only laid lands. Okin tried to clear a path for the Lynx with Dromar's Charm and Vindicate, but the Vindicate was Absorbed.

This left him low on mana for one turn, and Yuri forced through a Lightning Angel by Disrupting Okin's Gainsay. Okin didn't have any answer for the Angel, which managed three attacks before it was Vindicated. This left him open once again, and a kicked Skizzik finished the match.