Pierre Malherbaud is the two times French National Champion. Recently he reached top 8 in Grand Prix London with his Land Destruction Domain. He is playing the same deck today. Janosh Kühn, on the other hand, has about ten Pro Tours under his belt and played in the semi-finals of Worlds in 1997. His deck of choice is Dark Domain. 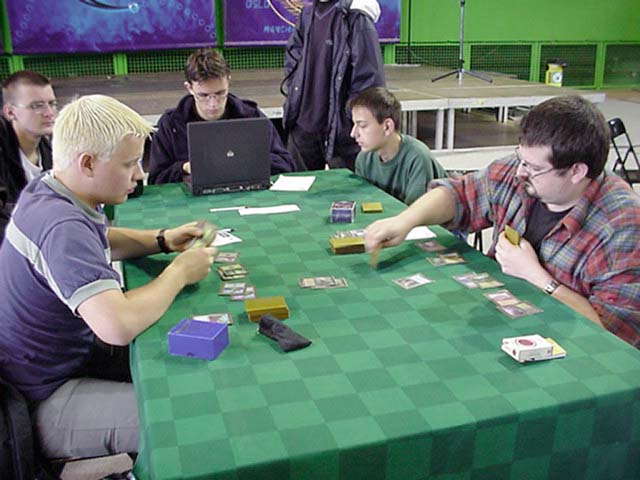 Pierre won the roll and went first. Janosh had to mulligan his opening hand as well as the six card one. He kept his five cards. Pierre searched for the plains with Lay of the Land, then stabilized his mana base even more by playing Fertile Ground. He destroyed Janosh's swamp but he seemed unbothered by mana problems despite having a five-card hand. Pierre cast a Sabertooth Nishoba, which Kühn answered with a Collective Restraint. Malherbaud just Vindicated a swamp and attacked with the fatty paying three mana. Kühn had yet another Restraint then cast the third completely locking Malherbaud's attacks, who finally played a Restraint on his own.

A few turns passed in a play-a-land-go manner with none of the players able to break stall.

Finally Kühn played a Void naming six, killing the Nishoba and seeing Pierre's hand consisting of Legacy Weapon and a Spiritmonger. Malherbaud put his ultimate weapon on the table and proceeded to remove Kühn's lands from the game. Janosh was desperately trying to find an answer but could not find any. Finally he lost all his black mana sources to the weapon and now had to search for both the Chromatic Sphere and the Void. After the swamps, came the mountains and finally the forests. Seeing no way to win the game Janosh scooped.

Both players sided out their Global Ruins and Destructive Flows, along with some Collective Restraints. Malherbaud put in Emblazoned Golems, Rith, the Awakeners and three Evasive Actions while Janosh put in some Addles, Pernicious Deeds and Spiritmongers.

Malherbaud started building up his mana base with Lay of the Land, Harrow and a Fertile Ground, while Janosh played only Islands and Forests.

By turn six, Malherbaud already had a full Domain on the table and countered Kühns attempt to Harrow out some lands. Kühn drew three cards with Allied Strategies after having played a Swamp while Pierre's Fact or Fiction revealed some mana stabilizers and a Collective Restraint. He Vindicated Kühn's lonely Swamp not allowing him to get out of mana problems too quickly, then tried to Implode the Mountain, but Janosh sacrificed it to the Harrow in response. Malherbaud summoned an Emblazoned Golem and passed, while Janosh slammed down a Legacy Weapon. Malherbaud had a great answer for it in the form of Dwarven Landslide with kicker destroying Swamp and a Plains, the only two mana sources of that colors Kühn had. Janosh could only play a Collective Restraint but it was not enough to stop Malherbaud's attacks as he now had only Forests and Islands. Pierre then started reusing his graveyard with Yawgmoth's Agenda to make sure he had access to all his land destruction again. He smashed two islands into a pile of dust with a Landslide and forced Janosh to think hard about a way of getting out of the troublesome situation. Pierre proceeded to recycle all his Harrows and Lay of the Lands further thinning his deck. With no mana and no way to win, Kühn extended his hand.