Kondratiev is an unknown Russian player doing quite well here in his second Grand Prix, and Morgan is one of the host of Swedish players here this weekend. Yaroslav is playing one of the most unusual decks, Treva's Solution, which is basically The Solution with a few assorted green cards thrown in for good measure. Morgan's deck is the more standard R/U/W Aggro deck. 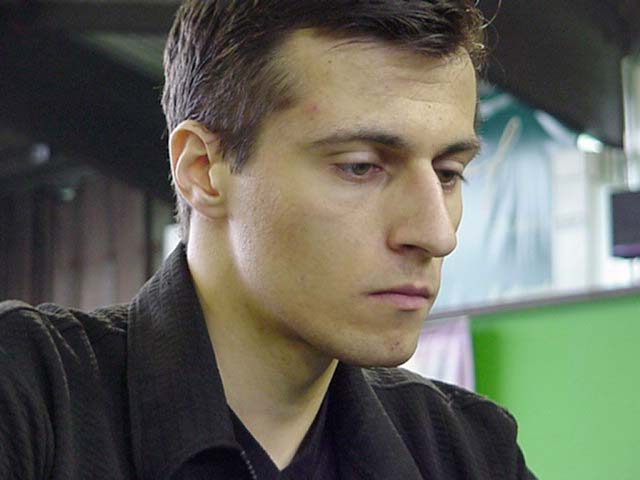 Both players played Meddling Mages, with Yaroslav's stopping Repulse, and Morgan's stopping Exclude. Karlsson turned the bear fight to his advantage with a Lashknife Barrier. Yaroslav played a Galina's Knight and chose to double-block Morgan's Meddling Mage when it attacked. This seemed like a strange decision, not to say an incorrect one, since of course Morgan had Urza's Rage to get a two-for-one. If he hadn't blocked Yaroslav could have raced since he had Absorb for whatever blocker Morgan might play.

The Mage continued to beat unopposed for a few turns, until Yaroslav used an Angelic Shield to bounce it, and then an Exclude to counter once it was replayed. Morgan found another one and used it to ban Questing Phelddagrif, although Yaroslav only had them in his sideboard.

Kondratiev played a Stormscape Apprentice, which Morgan tried to remove with a Flametongue Kavu. Yaroslav Repulsed the Apprentice in response, but Morgan didn't have to kill one of his own creatures, since he had by now three Lashknife Barriers.

The game went from bad to worse for the Russian as he drew land after land. He was unable to counter a Skizzik, which won the game in short order, with the help of Flametongue Kavu and a Galina's Knight.

Yaroslav's draw was good in this second game, with a second turn Meddling Mage naming Fire/Ice. Morgan played a Galina's Knight, and Repulsed the Mage, to get in some early attacks. 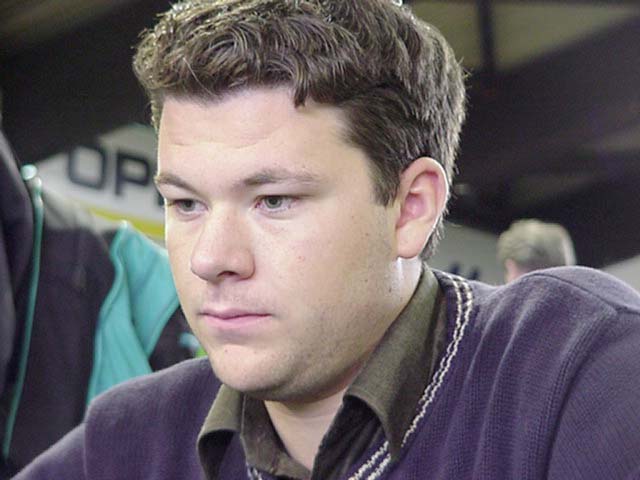 This game, however, Yaroslav was playing with Questing Phelddagrif, and it entered play on his fourth turn. Looking for an answer, Morgan played a Lashkinfe Barrier, but only found a Goblin Legionnaire.

Trying to ensure that his Phelddagrif went the distance, Kondratiev set his second Meddling Mage to Jilt, and his third to Repulse. Even so, Morgan was able to get the Hippo off the table, by using his Goblin Legionnaires on the Mage, and then Jilting the Phelddagrif, incidentally killing trhe other Mage.

He didn't have any way to stop Yaroslav from immediately replaying it, and as Morgan was only on six life, he soon had to start chump-blocking. With a Lightning Angel and then a Skizzik, it looked like Morgan might have a slim chance to race, but a second Phelddagrif put paid to that and they started the final game with only around six minutes left on the clock.

With so little time left in the round, the players took their turns quickly. They both had Meddling Mages on the second turn, stopping Exclude and Repulse. Yaroslav made a Gaea's Skyfolk which traded with his opponent's Mage, but Morgan had the better creatures.

He summoned Lightning Angel on turn four which started to attack, and then a Flametongue Kavu to kill Yaroslav's Meddling Mage, leaving him with only a Galina's Knight.

The Russian did have an Armadillo Cloak, butr waited as he wanted a second Galina's Knight out before attacking. Then he played a Voice of All, but it was Repulsed and another Lightning Angel attack knocked him down to five life. Now the Armadillo Cloak wasn't enough to save Yaroslav, since Morgan Iced his only blocker to attack for nine damage and the match.