The 2010 Magic: The Gathering World Championships is the culmination of the Magic year. Players from more than 50 countries will come together in Chiba, Japan for the pinnacle of international Magic competition. National Champions, Pro Tour winners, the highest-ranked DCI players, and more will square off to earn the coveted title of "World Champion." The Magic Online World Champion will also be crowned in a separate invitation-only tournament.

Worlds also features the best public events of the year. There's a packed schedule of events anyone can play in, plus you can meet Magic creator Richard Garfield and take part in Massive Magic, artist signings, fan activities, game shows, trading, and much more for every type of Magic player.

The 2010 World Championships will be held December 9-12 at the Makuhari Messe.

Looking for the ultimate Magic experience? Get yourself to Chiba for the 2010 World Championships and take part in one of the many events open to the public. Standard, Extended, Booster Draft, Sealed Deck, Legacy, Vintage, Two-Headed Giant, Archenemy, EDH...it's all here! These events feature prizes such as airfare and invitations to each Pro Tour in 2011, foil versions of every card legal in Standard, iPods, all three From the Vault sets, an Xbox 360 Game System, Nintendo DS, uncut foil card sheets, and much more. The biggest Magic weekend of the year kicks off in style Wednesday night with 8-player single elimination events from 17:00 to 20:00—all Booster Drafts are ¥ 500 and Constructed events are free (while supplies last)!

We know you’re a fan of the Magic: The Gathering Pro Tour; now you can make it official! Check out the official Magic Pro Tour Facebook page to connect with the Pro Tour community, view exclusive photos, share your Magic stories, and more!

Please send an email to press@wizards.com if you wish to set up a press credential for the 2010 World Championships. Wizards asks that all media requests be submitted by November 24 (two weeks prior to the event).

Along with crowning individual and team World Champions, we're awarding the 2010 Magic Online Championship in Chiba with a total prize purse of $100,000! The ten winners of the 2010 Season Championships plus one last-chance qualifier and the 2010 Magic Online Player of the Year will compete in a three-round Swiss tournament each day across different formats, culminating in the top two battling it out Sunday for a $25,000 first prize. 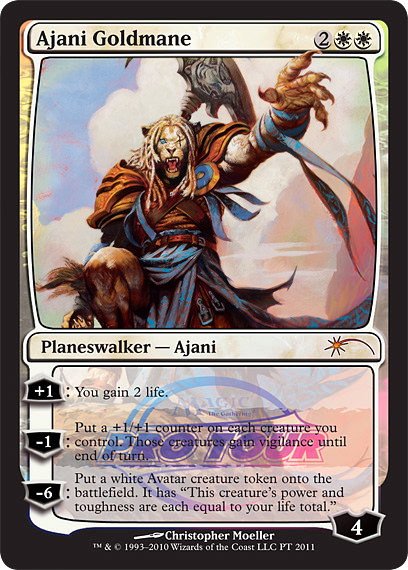 Come by the Information Booth and get an exclusive alternate-art Ajani Goldmane card by Christopher Moeller (while supplies last).

Meet Richard Garfield
Dr. Richard Garfield, the creator of Magic: The Gathering, will be at the 2010 World Championships for signings each day. Schedule to be announced.

Battle on Mirrodin
Choose your side and earn achievements all weekend! Pick up a Mirran or Phyrexian badge at the Wizards Information Booth or the Public Events area and track your progress across 20 different achievements. Plus, whenever you play in a public event, you win points for your chosen side. At the end of Saturday's events, the 100 players with the most points from each side will receive a faction t-shirt.

Meet the Artists!
Meet some of the game's top artists! Mark Tedin, Chippy, Raymond Swanland, Chris Rahn will be in attendance signing cards, plus special guests noted 3-D card artist Ookubo and Magic manga artist Yoshino Himori will be at the event showing off their work.

Dengeki Mao Booth
Published by Kadokawa Inc., the monthly manga magazine Dengeki Mao features the official Magic: The Gathering manga, based on the novel The Purifying Fire, the first trade paperback version of which will be released at the end of November. Come get your own copy of the paperback along with the Japanese version of the Jace vs. Chandra Duel Decks, featuring alternate art based on the manga, and get them both signed by the manga artist Himori Yoshino! She will be available for signings on Saturday from 11:00-12:00 and 14:00-15:00. 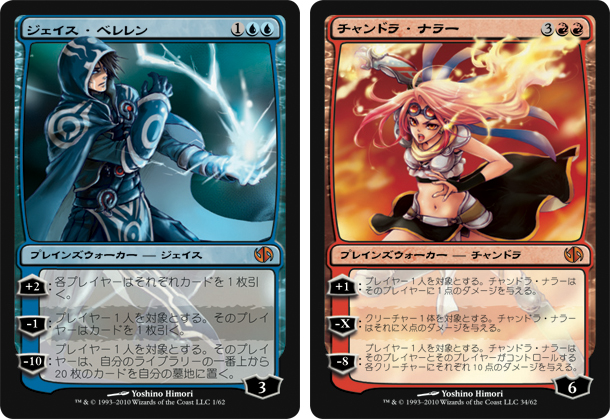 SquareEnix Booth
See Magic: The Gathering characters as you've never seen them before in SquareEnix's arcade CCG "Lord of Vermillion II". When one of the ten game cards featuring Magic creatures is placed on the game screen, it comes to life in 3D, ready to battle for you against your opponents. Come learn how to play or play a game and get a promo copy of one of the Magic Lord of Vermillion cards (while supplies last).

Massive Magic
Mirran or Phyrexian...which side are you on? Play out the Scars of Mirrodin conflict with oversized Magic cards on a giant playmat, teaming with members of Wizards of the Coast R&D!

This year's Magic: The Gathering World Championships will be held in the Makuhari Messe convention center, located in the Kaihin Makuhari area of Chiba, Japan. Since it opened in October 1989, Makuhari Messe has been Japan's premier convention center, regularly hosting the Tokyo Motor Show, the Tokyo Game Show, the Jump Festa (a manga, anime, and video game exposition), and other high-profile conventions and concerts.

Getting There
Travelers arriving from outside Japan at Narita Airport can travel to the Makuhari Messe area using either an express bus or by taking advantage of Japan's sophisticated rail system.

The easiest and most direct route is via Keisei Limousine Bus. Counters for the bus can be found in the arrival area in both terminals of the airport. A one-way fare to the Makuhari area costs ¥1,200, and the trip takes approximately 45 minutes (subject to traffic conditions). A return ticket to the airport can be purchased at the bell captain desk of most hotels in the Makuhari area. Busses to and from the airport depart once per hour; be sure to check the departure schedule when arranging your return trip.

There is no direct train service between Narita Airport and the Makuhari Messe area. Here are the two most direct routes:

1) Board the Keisei Narita Sky Express at the airport underground station. Travel six stops to Higashi-matsudo station (東松戸) and transfer to the JR Musashino line (ＪＲ武蔵野線). Kaihin Makuhari station (海浜幕張), the closest station to Makuhari Messe, is six stops from Higashi-matsudo. Total fare for this trip is ¥1,200.

2) Board the JR Narita Express at the airport underground station. Travel to Tokyo station and transfer to the JR Keiyo line (ＪＲ京葉線). The Keiyo line runs both regular and express trains to Kaihin Makuhari; actual travel time will depend on which train is taken. Total fare for this trip is ¥3,280.

Travelers coming from the Tokyo area, including those arriving at Haneda Airport, should take the JR Keiyo line from Tokyo station. The fare from Tokyo is ¥540.

Accommodations
There are a number of hotels located within walking distance of both Kaihin Makuhari station and Makuhari Messe.