izards of the Coast is excited to announce the 2011 Grand Prix schedule, featuring 20 events across 13 different countries.

The first five Grand Prix take place in some of the top cities in the world: Atlanta, Paris, Denver, Kobe, and Barcelona. Grand Prix–Paris looks to be the can't-miss event of the year because it's the debut of Magic Weekend, featuring a combined Pro Tour and Grand Prix all under one roof! The schedule of Magic Weekend Paris allows players to participate in both events. Earn a Top 16 finish at any of these Grand Prix and you'll earn an invitation to Pro Tour–Nagoya in June.

The spring and early summer Grand Prix slate offers up six more amazing stops. Dallas, London, Prague, Providence, Singapore, and Kansas City will be your destinations in April, May, and June. The event in Singapore is scheduled the week prior to Magic Weekend Nagoya to help you attend both events. Top finishes at these six events grant invitations to Pro Tour–Philadelphia in September.

The last set of Grand Prix in 2011 is the biggest, with nine events from August to November. Highlighting the late-season schedule are trips to Shanghai, China and Santiago, Chile. Grand Prix in Amsterdam, Pittsburgh, Montreal, Milan, Brisbane, Hiroshima, and San Diego round out the 2011 season. For those looking to include Magic Weekends in their Grand Prix travel schedule, Pittsburgh is the weekend before Magic Weekend Philadelphia and San Diego is the weekend before the 2011 World Championships at Magic Weekend San Francisco. These nine events provide invitations to the first Pro Tour of the 2012 season. 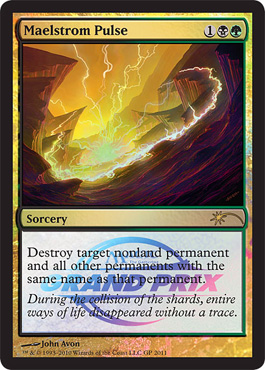 Yours for participating, while supplies last

Along with the excitement and big prizes of the Grand Prix, each of these weekends features all types of Magic activity. From Pro Tour Qualifiers and other major public events down to 8-person pick-up drafts, it's non-stop Magic when a Grand Prix comes to your town. You can also meet prominent Magic artists at each Grand Prix and have them sign your cards for an unforgettable memento of your tournament experience. Plus, every participant in each Grand Prix receives a special foil promotional Maelstrom Pulse (while supplies last).

If you're looking for a leg up on the competition, be sure to check out Grand Prix Trials held at local WPN locations leading up to a Grand Prix. These tournaments provide three-round byes for specific Grand Prix to top finishers and are run in the months prior to each Grand Prix. Become a part of the Pro Tour community by joining the Pro Tour Facebook group and share your experiences traveling the world playing Magic with your friends.