This has been a landmark year for Asian Magic. Traditionally overshadowed by the strong performances of the storied Japanese community, regions such as Korea, Singapore, Hong Kong, and Chinese Taipei have been steadily making a ruckus in the global professional Magic scene, and it has become impossible to overlook them. At the top of this rise of talent has been Team MTG Mint Card, which has gone about snapping up the finest talent that Asia has to offer, including newly-minted Platinum Pro Nam Sung Wook.

"Obtaining Platinum has been the defining moment of this past year in Magic for me," Nam said.

Surrounded by friends and teammates, Nam's own voice was lost in the cacophonous shouts of "Pla-ti-NAM" coming from the dozen players around him. His name had just been called for the Top 8 of Pro Tour Journey into Nyx, cementing his position on the Platinum roster. His teammates, ranging from Korea to Singapore, cheered his name loudly and proudly, proclaiming to the rest of the room that he had arrived.

When he won Grand Prix Melbourne early last year, he became the first Korean player to ever win a Grand Prix, though it wouldn't stay that way for long. His teammate Park Jun Young accomplished the same feat in Minneapolis two months later. His Finals appearance at Pro Tour Journey into Nyx marked the farthest a Korean player had ever made it at a Pro Tour. 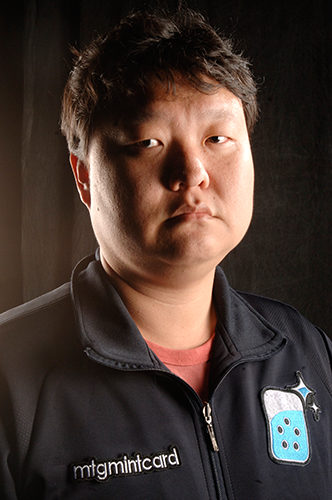 Yet we all too often see these events become flashes in the pan, success never attained again. Make no mistake: Nam is here to stay. All it took was a taste of success to drive him to continue to improve his game.

"The single most-memorable moment in my Magic career came at Worlds 2008 in Memphis, where I managed a perfect 6-0 record in the Standard portion of the tournament, propelling the Korean National team to a 1st place standing after Day One," Nam recounted. "This was my first premier event, and I managed to attain tremendous results. It was the very reason that I became motivated to succeed in Magic."

With an increased desire to succeed, Nam sought out players who would help him rise to the next level. Before Team MTG Mint Card came along, bringing the best players in the region under one banner, Nam sought out help in Korea.

"I have had a large number of influential people around me," Nam admitted, "but Korean Pro Cynic Kim has helped me the most. He was on my Team Blitz, and he game me many tips for playing. Inhwan Kim, a judge, was another person. He helped me overcome my poor English skills and difficulties understanding cards, which allowed me to concentrate and play better Magic."

And Magic can be a difficult game. No top player would ever deny this.

"Magic can be a complicated game," Nam admitted. "Even Pro Players can have difficulties with the rules sometimes. Teaching people the basic rules and giving them opportunities to play lots of Magic rather than letting them potentially struggle through learning themselves is one of the best ways to help new players enjoy Magic fully."

This year, Nam becomes the first Korean player to play at the newest incarnation of the World Championship.

"Playing in the World Championship is the biggest honor I have received since I started playing Magic," Nam began, "and it is a fantastic reward for my play during the past season. Playing with the top players in the world has great significance to me. Victory comes to those who prepare well. I hope that all of my preparation pays off."