i, this is Helene Bergeot, Director of Organized Play for Wizards of the Coast. Today we're announcing some changes to our Organized Play offerings (read the specifics here), and I want to take the time to explain the goals and driving forces behind these recent decisions.

We initiated the changes to our Premier Play program with the following goals in mind:

We are committed to continued investment in Premier Play to drive that aspiration.

At the same time, we are partnering with Wizards Play Network stores throughout the world to create great play experiences; in a number of countries, hobby stores become the hub where Magic communities form and grow. It's the place where players get together on a regular basis.

Hobby stores are the fundamental first step toward building and growing Magic communities. Because of this, it has become more important to connect Premier Play with in-store play. This is the insight that has been behind the recent OP changes.

With that said, we have listened to the thoughts you shared with us after the previous announcements.

You gave us specific feedback on the issues you felt most strongly about, and here are the changes we're making:

We share with you the desire to have a Premier event that allows players to represent their nation. Determining which country is able to declare, "We are the best!" and giving the opportunity to local communities to support and cheer for their representatives is what we are bringing to you with the introduction of the World Magic Cup.

I read a lot of your comments about Nationals and I want to explain why we had to reconsider that tournament even though it is beloved by many. Under the previous tournament structure, organizing and running Nationals was consuming most of the resources of many countries, leading them to neglect the development and growth of their local Magic communities. We're very excited to solve this problem by providing a global team competition supported by our local network of hobby stores.

The World Magic Cup will see teams of four players compete to determine the best Magic nation in the world. Three of the players will be selected by World Magic Cup Qualifiers, a series of tournaments run by selected hobby stores. The fourth team member will be the top-rated professional player in the country. This change keeps a Premier-level team event that crowns the top country in a given year, with the Players Championship crowning the top individual player.

We also share the belief in the importance of providing access to Premier Play to most countries; this is why top-finishing players at the World Magic Cup will qualify for the next Pro Tour. The World Magic Cup serves as a path to the Pro Tour for smaller market nations.

For full details on the World Magic Cup, I encourage you to read the announcement here.

An End to the "Grind"

There is undisputed consensus on this point: as much as the structure introduced in September was created to encourage play, that play should not force a compromise with your enjoyment of being rewarded for playing Magic. We don't want you to feel obligated to play in a fashion that lessens your enjoyment of the game.

Following Pro Tour Dark Ascension, we will be eliminating the Planeswalker Point invites for the Top 100 players in a given competitive season, instead favoring direct invites that reward skillful play. These will include the Top 4 finishers at Grand Prix tournaments, the Top 4 teams from the World Magic Cup, and the Top 25 finishers at each Pro Tour. The plane tickets currently awarded to the Top 100 Competitive Points players will go to these direct invitees.

We still want to reward players for success and dedication to the game, but we are shifting how we do so. We're splitting the current Planeswalker Points Competitive category into Seasonal Award points and Yearly Award points. This system will be used to distribute invitations to World Magic Cup Qualifiers and byes at Grand Prix, but now once you reach a threshold of points you can count on locking in your benefits rather than being constantly uncertain whether you're playing often and well enough to receive your perks. 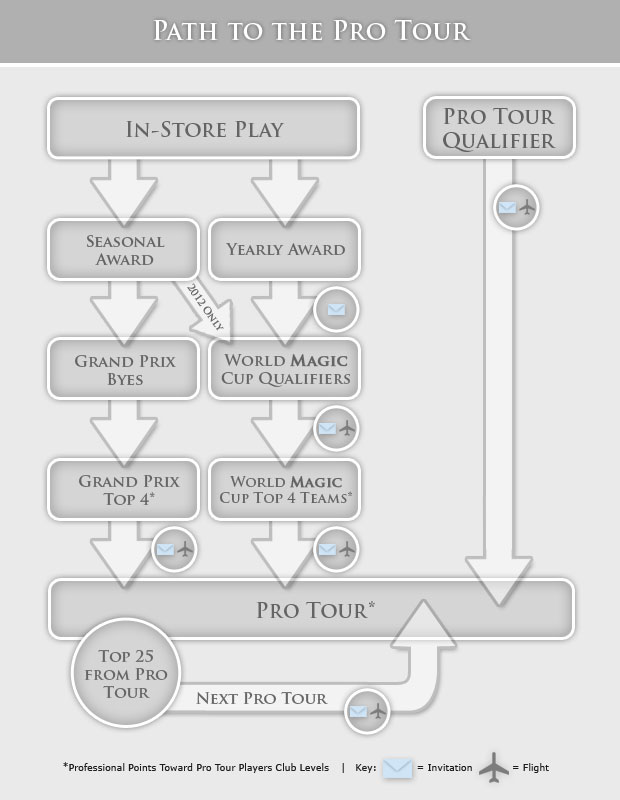 You also gave us feedback on controversial Planeswalker Point multipliers, and we have taken steps based on your feedback to resolve these issues as well. I want to take this opportunity to clarify what it means for Friday Night Magic. The FNM multiplier will be reduced to keep the spirit of that series intact: FNM is meant to be a friendly competition and new players should feel welcome to participate and join their local Magic community. Additionally, FNM should not overshadow other store-run events, which had a lower multiplier.

A Few Additional Words about PTQs

In North America, selected hobby stores will begin being able to host Pro Tour Qualifiers for Pro Tour Avacyn Restored, with the goal of full store-run PTQ implementation in late 2012. We are partnering with these hobby stores to offer the best possible play experiences to you.

Additionally, we have decided to increase the global number of PTQs to better serve the remote areas and maintain a path to the Pro Tour for these communities. While we currently run 200 PTQs by season, by the time of the Pro Tour #3 season, this number will have increased to 220. Markets such as those in Eastern Europe or island nations, to name a few examples, will get the priority. It doesn't mean that all small markets will get a PTQ per season, but we'll make sure to rotate PTQ slots from one season to another between the smaller countries we want to serve better.

I realize that we're making a lot of changes—thank you for your support.

We are committed to Premier Play and growing the Magic community by providing great play experiences. Feel free to share your thoughts on the forums. You can also reach out to us throughout the year via social media: on Twitter use the hashtag #mtgop and send messages to myself at @HeleneBergeot, OP programs manager Scott Larabee at @ScottLarabee, or Magic R&D head Aaron Forsythe at @mtgaaron.