In honor of the current "What if?" Week, I will also be exploring an alternate reality scenario today. My premise is: What if Magic Online had no banned or restricted lists? 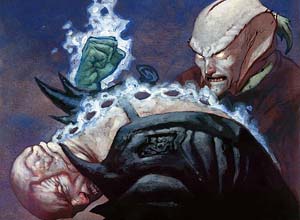 Sometimes R&D makes a mistake and designs a card that turns out to be overpowered and format-warping. In order to keep Magic healthy, they occasionally have to bite the bullet and ban or restrict a certain card. It's for the good of the game; when a certain deck archetype is utterly dominating a format and it is nigh impossible to make a deck that can beat it, you are effectively forced to bring that deck to a tournament if you want to stand a chance of winning. By banning a vital overpowered piece of that deck, they make room for new decks, so fun and creativity are fostered again.

But now let's imagine that for some reason banned lists were never programmed on Magic Online, so the online players would have fewer restrictions compared to the paper players. The most striking impact would be for online Extended, where players would be allowed to play Aether Vial, Disciple of the Vault, Skullclamp, and Entomb. What would the result be? I will explore my view on that today. Note that if you are looking for real Extended coverage in your own reality, then may I suggest you take a look at the coverage for Grand Prix - Dallas.

Lastly, I'll state up front that this article will touch excessively upon the "butterfly effect," a notion taken from the chaos theory. It refers to the idea that a small variation in an initial condition may produce large variations over the long term. Applied to today's article, completely different unrelated things may have happened all over the Magic world, merely because no banned lists had ever existed on Magic Online in this alternate reality. Perhaps even stuff as crazy as someone doing job interviews got into a bad mood one day due to losing to a banned card, and then consequently he hired a different person, who made different decisions on Magic Online management, and so on.

Of course, Standard is exactly the same in this alternate universe, so we'll start with our usual Standard metagame table and go from there.