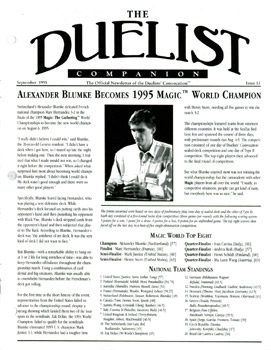 "I really didn't believe I could win," said Blumke, the 26-year-old Geneva resident. "I didn't have a deck when I got here, so I stayed up late the night before making one. Then the next morning, I realized that what I made would not win, so I changed it right before the competition." When asked what surprised him most about becoming world champion, Blumke replied, "I didn't think I could do it. My deck wasn't good enough and there were so many other good players."

Specifically, Blumke feared facing Hemandez who was playing a very defensive deck. While Hernandez's deck focused on putting cards into his opponent's hand and then punishing his opponent with Black Vise, Blumke's deck stripped cards from the opponent's hand and then subjected that player to The Rack. According to Blumke, Hemandez's deck was "the antithesis of my deck. It was the very kind of deck I did not want to face."

But Blumke—with a remarkable ability to hang on at 1 or 2 life for long stretches of time—was able to keep Hernandez off-balance throughout the championship match. Using a combination of card denial and big creatures. Blumke was usually able to overwhelm Hernandez before the Frenchman's deck got rolling. 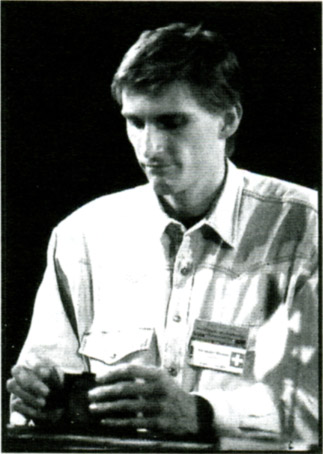 For the first time in the short history of the event, representatives from the United States failed to advance to the championship round, despite a strong showing which landed them two of the four spots in the semifinals. Zak Dolan, the 1994 World Champion, failed to qualify for the semifinals. Blumke eliminated 1995 U.S champion Mark Justice 3-1, while Hemandez had a tougher time with Henry Stern, needing all five games to win the match 3-2.

The championships featured teams from nineteen different countries. It was held at the SeaTac Red Lion Inn and spanned the course of three days, with preliminary rounds run Aug. 4-5. The competition consisted of one day of Duelists' Convocation sealed-deck competition and one day of Type II competition. The top eight players then advanced to the final round of competition.

But what Blumke enjoyed most was not winning the world championship, but the camaraderie with other Magic players from all over the world. "Usually, in competitive situations, people can get kind of nasty, but everybody here was so nice," he said.

The points awarded were based on two days of preliminary play (one day of sealed deck and the other of Type II). Each day consisted of a five-round Swiss style competition (three games per round) with the following scoring system: 3 points for a win. I point for a draw, 0 points for a loss, 0 points for an unfinished game The top eight scorers then faced off on the last day in a best of five single elimination competition.