Clowns to the left of me, jokers to the right
–Stealers Wheel, "Stuck in the Middle with You"

love sinking my teeth into the color wheel. Far from being only a mechanical concern, it's the heart and soul of the flavor of Magic. Richard Garfield? The original Vorthos, baby.

But the genius of Richard's creation goes far deeper than assigning elements of a fantasy world to a bunch of colors. As I'll discuss today, part of the key to Magic's success has to do with its system of enemy and allied colors, a system that intrinsically creates conflict, even between supposed allies.

Conflict is the engine of any story. For a story to get up and go, its characters have to experience friction with their environment, with themselves, and most of all, with each other. Watch any summer blockbuster movie, pick any character other than the protagonist, and ask yourself, what is this character here for? I'll bet you that, at some point, directly or indirectly, that character either generates conflict for the protagonist or helps him or her manage it (and often both). If someone is hanging around in a story, having basically an okay time, not really having that difficult a time with anything, and just generally getting along with the world and everyone in it, then I'll tell you right now: the story editor (and the reader / audience) is going to ask some serious questions about why that character is in there.

So, sure, conflict. Obstacles to overcome. Bad guys to beat up. Deep psychological scars to come to grips with. These are common in stories, including Magic stories—novels, short stories, comics. We already know one of the most important sources of conflict in Magic—the concept of enemy colors. Black Deathmarks white and green; blue Flashfreezes green and red. Lines of enmity crisscross the color wheel. The clever bit is that conflict is generated even between allies.

Part of Magic's genius is that it's divided up into five colors. I'm not talking about the colors themselves here for a minute, but about the specific number five. It's not divided up into four, like the number of classical elements. Not into two, like many good guy-bad guy schemes. Not into six, like two teams of three-on-three streetball staring each other down. Five is a prime number—the only whole numbers it's divisible by are one and itself. The beauty of five (or any prime number greater than two) is that the factions don't line up and break down into smaller groups nicely. It doesn't create a nice, symmetrical square like four, or a bunch of easy grouping schemes like six. Five is lopsided. It's uncomfortable. It's messy. And that's excellent for creating strong conflict. 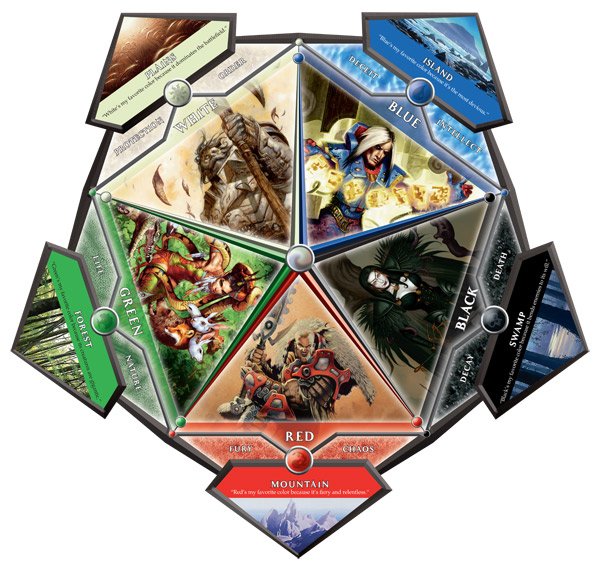 Each color shares some values and perspectives with the colors adjacent to it. But each of a color's allies are themselves allies with the color's mortal enemies. Take green for example. It has a lot in common with its ally red; they both follow their own non-intellectual instincts and recognize that, to achieve one's ends, destruction is sometimes necessary. But red shares a lot of values with green's enemy, black; red and black both look out for their own individualistic needs, and aren't afraid to use force to get what they want. Green is similarly allies with life-affirming white, but white often hobnobs with the other color that makes green foam at the mouth: blue. And so around the color wheel.

There are no easy alliances.

In Shadowmoor, the races of Lorwyn all shift into (or in the faeries' case, remain in) allied color combinations. They weren't all enemy-colored before; the merrows were blue with a little bit of white before, for example, and now they're blue with a healthy amount of black. Let's take a look at each race and see what about them makes them their allied-color combinations. It's also a great excuse to see some of the concept art from the Shadowmoor style guide.

The kithkin of Shadowmoor have a traditional, human-like social order that aligns them with white mana. Their shared consciousness and general distrust align them with blue mana, as well as their willingness to manipulative and deceive others to protect their communities. 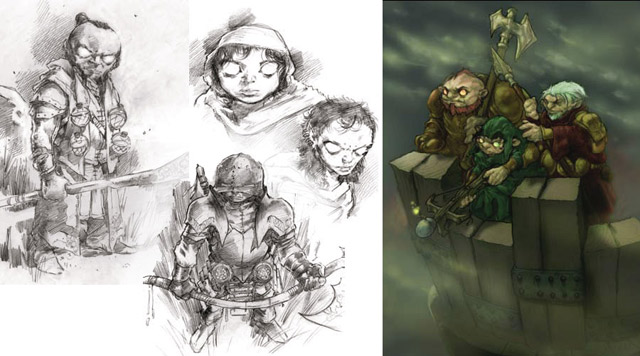 It's not only the merrows' aquatic existence that ties them to blue mana, but also their deviousness and resourcefulness. Their avarice and ruthlessness makes them black-mana creatures as well. 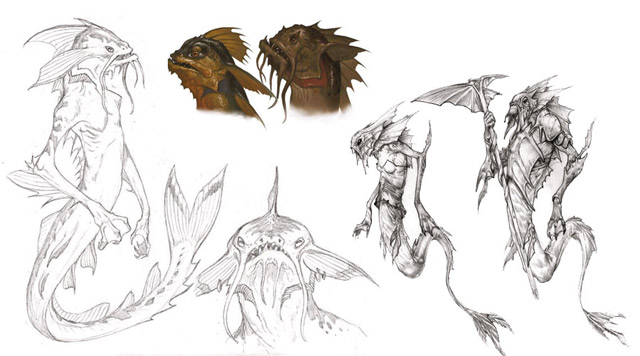 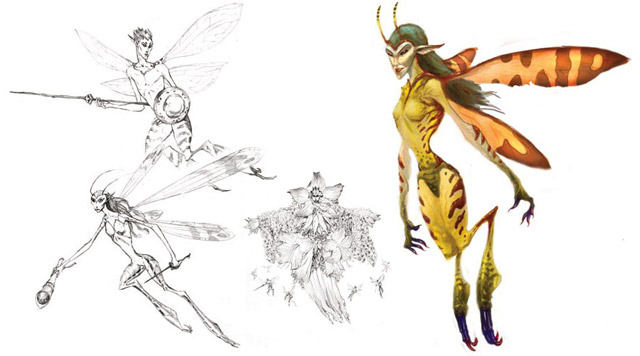 The cinders are all that's left of Lorwyn's flamekin. Their fires have almost burned out, literally and metaphorically, leaving smoking husks of black ember full of hatred and despair. They seek ways to keep their inner flames hot enough to sustain their lives, and this desperation drives them to villainous extremes. Cinders can find little meaning in the world of Shadowmoor, so they seek to benefit themselves at others' expense. Although their feelings are mostly negative, they are nonetheless intense emotions, tethering them to red mana. 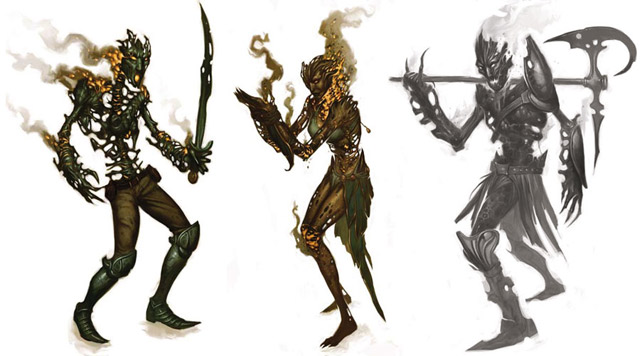 Shadowmoor boggarts come in many shapes and forms, like Lorwyn boggarts. But gone are these goblins' ties to the marshes. The warrens have become gangs—loose, semi-nomadic, wolfpack-like social groups. The boggarts seek out new sensations relentlessly, but they also have a strong destructive urge. They are the "barbarians" of the Shadowmoor world, driven by impulse and instinct, with no thought to the consequences of their actions. 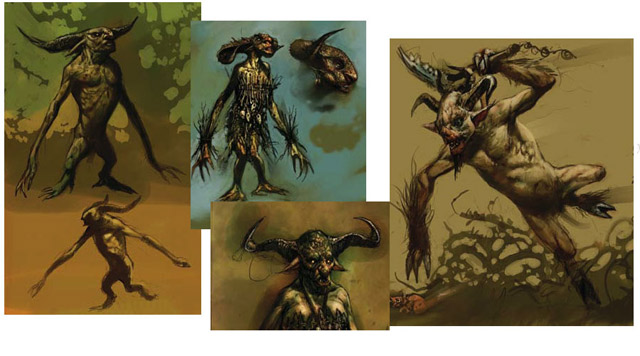 The towering giants of Shadowmoor have slept for so long that they have melded with the world itself. They now lumber across Shadowmoor in a state of feral half-consciousness. Like bears whose hibernation has been interrupted, they act according to the basest of urges, and when those urges can't be sated, they grow angry. 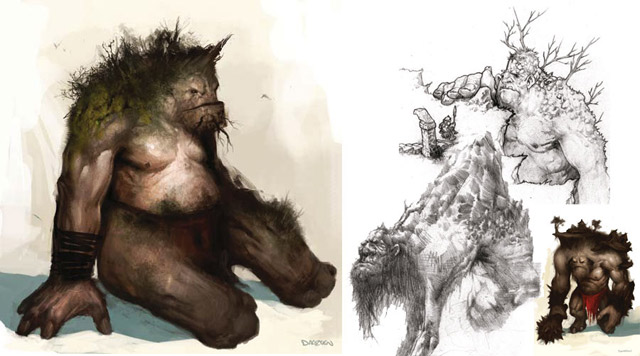 The elves are the beacons of hope and salvation in the twilight world of Shadowmoor. The elves have taken it upon themselves to protect and foster what little beauty remains in the world. Shadowmoor's elves are aligned primarily with green mana, but they also have an element of white mana. The white mana represents their interest in community, the rule of law, and the good of the many over the good of the few. 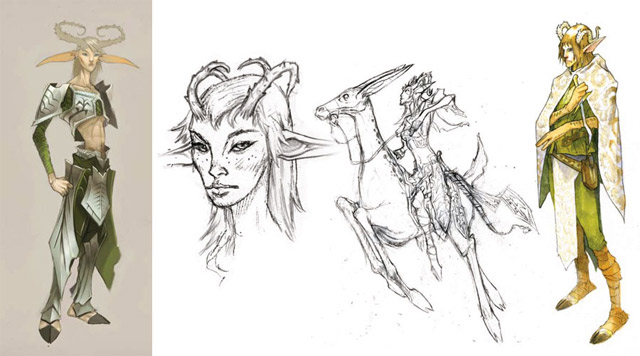 But before we leave green-white—what about Old Ghastbark? Treefolk are aligned with green mana, of course. Embittered by an existence with virtually no sunlight or verdancy, the treefolk have grown caustic, even malevolent, which actually gives them a strong black mana aspect. But some hoary old treefolk have mellowed in their old age, and are green-white in alignment—they're still creaky and terrifying, but filled with wisdom that could enrich many minds if the tales locked in their heartwood were ever told. 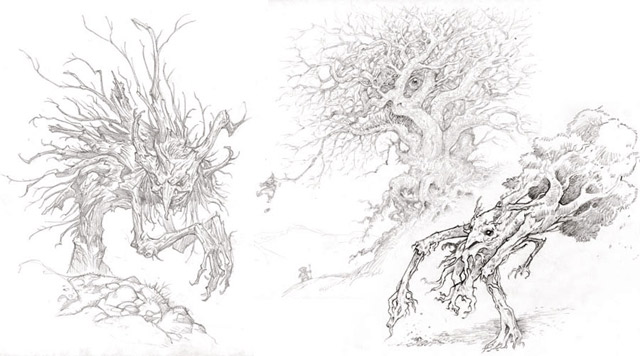 Shadowmoor is a great setting for seeing the conflict between allies come alive. In my story in the Shadowmoor anthology, a boggart whose warren-mates were killed teams up with a wayfaring elf hunter. Elves and boggarts share a color in Shadowmoor—green—and yet the two of them are definitely an odd couple. The organized, efficient, practical, community-oriented aspects of the elf's white side naturally clash with the impulsive, emotion-driven, chaotic aspects of the boggart's red side, even though they both share a fierce bond with nature in green.

This plays out in race after race. Boggarts and fae share black, but they don't get along. Giants and cinders share red, but they don't get along. Even when you're only talking about allies, the number five guarantees that you're automatically talking about enemy relationships, too. Every color's allies hate each other—which is the perfect set-up to have a world full of conflict.

As a final aside, you might have seen the Eventide booster on the front page. Think allied color combinations generate some strife and conflict? Just wait for Eventide.

Many folks had questions about the changes to the books plan I talked about last week. Wade's sums up a lot of the relevant questions all in one email:

I have a few questions about the new book formats you mentioned.

First of all, about the Planeswalker's Guides: Will they be written "in voice", as though they were actually intended to be read by planeswalkers? Or will they be behind-the-scenes exposés on how the sets were developed in the real world (or, at least, as "real world" as Wizards of the Coast can claim to be)?

The text of the Planeswalker's Guides is written "in voice," as if you were really a planeswalker learning about the plane you're traveling to for the first time. There are tips for dealing with the cultures and creatures of the plane and guidelines for magic use while you're there—that sort of thing. However, the art content of the book—sketches, concept art, and full-color art—gives you a little bit of the behind-the-scenes of the making of the set. So while your eyeballs get to take a journey through the actual creative process, your imagination gets to go the whole way.

The planeswalker novels are intended to create ongoing story arcs that bridge across several books. At this writing, we're planning two different plot "threads" that will develop in parallel, one focused mostly on the story of Jace Beleren and some of his colleagues, and another focused mostly on Chandra Nalaar. Each story will span across some planes you know (including planes that have been featured in card sets) and some planes you don't yet know.

In many cases, the new planes and locations visited in the stories will be created solely by the novel author (with the oversight of the books editing team and the Magic creative team, of course, but on the author's own initiative and for his or her own narrative reasons), which may or may not lead to future overlap in Magic card sets. In some cases, however, we may have reasons to coordinate closely with the author in order to incorporate future plans for Magic settings and/or events into the novels, and so it is possible that locations mentioned in novels could reveal information about future settings. I have to be cagey here, because all this stuff depends on a billion factors, many of which are not yet known, and none of which I can talk about anyway. That's probably frustratingly tantalizing—and believe me, I sympathize—but that's all I can elaborate on (regarding the "hintiness" of novels) for now. I know you guys are very interested in how all this stuff will go, so I'll do my best to let you know everything I can.