he fate of humanity on Innistrad will soon be decided. The battlefield has been chosen, the stakes are set, and the combatants are on a collision course. And when all is said and done, more than an angel will be released back into the world.

In the courtyard of Thraben Cathedral stands the massive obelisk of silver, the Helvault, where the archangel Avacyn and a host of demonic beings have been imprisoned. Last time, we learned that two determined women with opposite goals are poised to clash. One is the young cathar Thalia, the Guardian of Thraben, who has sworn to keep the holy Helvault from harm. The other is Liliana, the planeswalking necromancer who's dead-set on a mission to find a demon lord and destroy him. Today, these two collide. 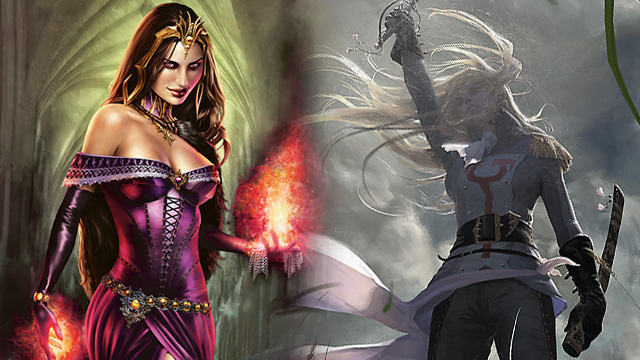 Liliana has made her way to Thraben. Her feet hurt and her runes itched. She has scoured Innistrad in search of the demon Griselbrand, chaining together clue after frustrating clue, dealing with all manner of creatures from annoying demons to the irritating planebound humans of Innistrad. She even fought a fellow planeswalker, the beast-mage Garruk. His vendetta is understandable, given that his black-mana curse originated from her tainted artifact, the Chain Veil, but still, his hunting her is getting in the way of her hunting Griselbrand. She managed to elude Garruk recently, leaving him facing a host of her reanimated zombies. That would have to do. And now she finds herself in a place that is decidedly not her element. She is among priests, holy symbols, and (worst of all) statues of angels—the holy city of Thraben. But one fact makes her smile—that the man she needs to find is Volpaig, the head of the demon-worshipping cult known as the Skirsdag.

Liliana is not surprised to find that the Skirsdag leader is also a bishop. On all worlds, people seek power in whatever forms they can find it—a principle she understands well. Liliana's confrontation of Volpaig goes how she would have expected. She demands to know the whereabouts of Griselbrand, but Volpaig refuses. She threatens painful and immediate bodily harm, but Volpaig vows to protect his master at all costs, even under threat of death. She prepares a spell to destroy this pathetic demon-pawn, but with his last breath, he lets something slip. As Volpaig dies, he grimly remarks that the only other person who knows where the demon lies is dead: Mikaeus, the Lunarch, who died in a recent siege of Thraben by rampaging undead hordes.

Finally, things are beginning to go Liliana's way. A bit more intimidation leads her to Mikaeus's resting place, the catacombs under Thraben Cathedral. She breathes unnatural life into Mikaeus's rotting body, reviving the former lunarch so she can pry the final secret from his rotting lips. Compelled to serve, the unhallowed Mikaeus tells the death-mage what she so longs to know: that Griselbrand is locked within the Helvault.

So, she thinks. One destroyed Helvault. Coming right up.

Liliana has put a lot of power into raising a small army of summoned ghouls. Before Thraben can muster enough forces to stop her, she marches onto the cathedral yard where the Helvault stands, destroying cathars and clerics as she goes. She has tapped once more into the tempting power of the Chain Veil, knowing her dark magic will need to be amplified to get past the forces guarding the cathedral. But the true problem lies ahead, silhouetted against the moon. How can a necromancer muster the magic necessary to shatter a towering, holy monolith of solid moon-silver? She has an idea that might work, but she'll need to let the Church of Avacyn play its part. 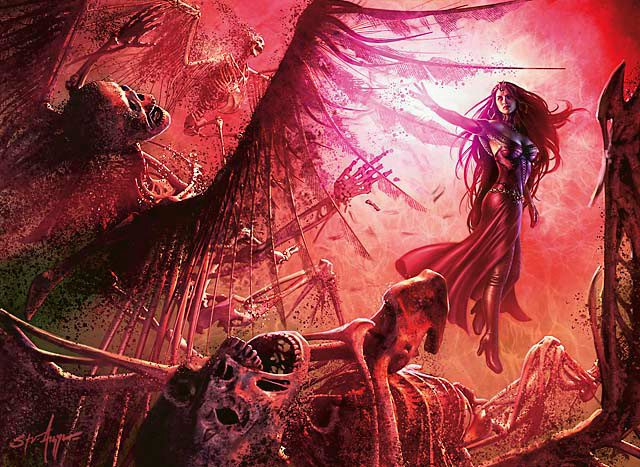 As if on cue, Thalia, the Guardian of Thraben, rushes out with her cadre of elite cathars to meet the undead threat. As Liliana's unhallowed forces crash into the cathedral courtyard, Thalia and her cathars surround the Helvault, protecting it with their lives. The ghouls and cathars clash, swords slicing through the dead and claws rending the living.

This is exactly what Liliana wants. With a wave of dark magic, she paralyzes the cathars, holding them in a spell of pain. The ghouls continue their assault on them, horribly gnawing the flesh from their bones as they're powerless to resist. Then Liliana gives her ultimatum: a spell that forces a dire choice on the young guardian.

"Either this shiny rock will be annihilated," she says, "or your compatriots. The choice is yours."

Thalia can feel the power of the coercive spell that is now upon her. She has vowed that no harm would befall the Helvault on her watch—it was her promise as Guardian of Thraben, fulfilling the legacy of her predecessor. She knows it is her sole mission, the only job she is responsible for. But she knows this witch will not stop with just her cathars. Thalia hesitates, muttering curses at the death mage under her breath, weighing her vow against the lives of the soldiers under her command and all the other people of Innistrad who might stand in Liliana's way. 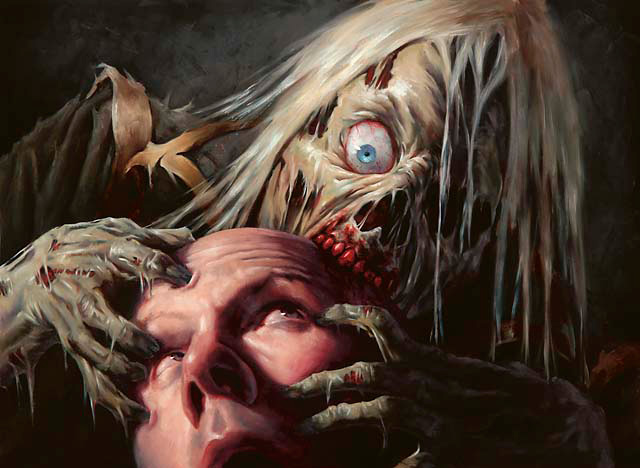 For their part, her cathars struggle to stay silent, muffling their pain as Liliana's ghouls tear them apart. But finally, it takes only the strangled cry from one of her cathars for Thalia to make her choice.

Whatever purpose the Helvault serves, it has not saved humanity. The walls of Thraben have been besieged by the undead. Vampire families roam openly in the villages and werewolf howlpacks ravage the lands between. The Helvault might be a holy relic, but Thalia's promise is worth nothing if it commits her to supporting pain and death. Crestfallen, Thalia points to the silver obelisk. Liliana nods, her spell complete.

For a moment, all sound ceases.

Cracks appear in the Helvault, rays of light piercing through the night from within. Then a blast obliterates the ghouls, knocks the cathars to the ground, and throws back Liliana and Thalia. A helix of golden light streaks skyward from the remains of the Helvault, illuminating the sky with its glow. The moon-silver monolith has been sundered, and ribbons of dark Æther flow away in all directions; a host of demonic entities are now free of their prison, and they slink off into the shadows. All eyes are on the luminous being who has appeared before the humans.

It is Avacyn, the Angel of Hope: pure, whole, and eternal. 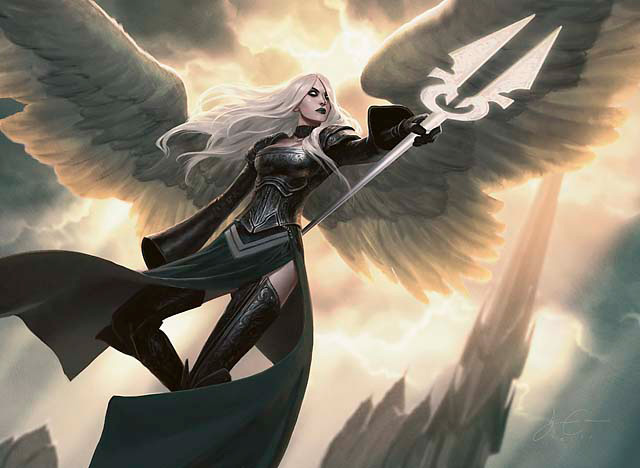 Within hours, Avacyn's return causes a surge in the holy magic across the plane. Avacyn's presence revitalizes the holy blessings of parish priests and the wards carved into roadside shrines. Flights of angels return, their despair erased, and see to striking down those monstrous beasts that have plagued the provinces. Archmages whose divine magic had been dampened regain their power, now able to wield powerful spells in Avacyn's name again. 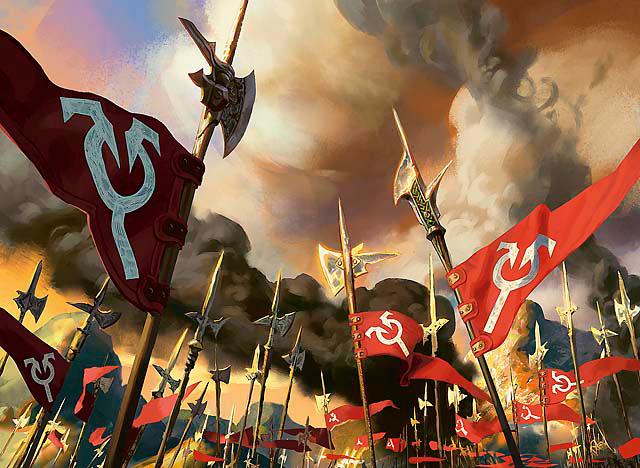 Creatures begin to surface that have not been seen on Innistrad before, some that had gone into hiding during the dark times, and some entirely new, forged for divine duty by Avacyn herself. As we'll see, evil has not been wiped out on the world—far from it. Darkness might be built into Innistrad's very nature. But those who depend on Avacyn's protection have new weapons in the fight. 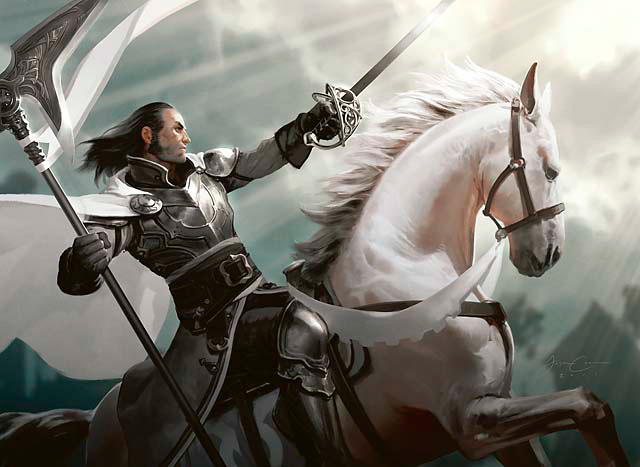 Thalia's cathar army is renewed, its strength and faith restored. And it is not long before she puts it to work, pushing back the vampires and zombie hordes, hoping to reclaim all of the four provinces for humanity.

That only leaves Liliana and her rendezvous with a certain demon.

As Griselbrand is released from the Helvault, his first thought, of course, is of power.

It's a bittersweet time for demon-kind, and for Griselbrand in particular. Everything this demon-lord has worked for has been fulfilled—and in the same moment, undone. The demons Avacyn trapped in that silver prison have been released again. The Skirsdag cult will have plenty of dark beings to worship once more. And Griselbrand himself will be able to resume feeding the mortals' temptation even as he consumes their souls.

But Avacyn, the jailer herself, is back now, restored and unharmed. Griselbrand's trick ultimately did nothing. The angels are returning, and divine power is being restored. The best thing for him to do now is to slip away quietly to the Ashmouth while the mortals are busy celebrating. He shall bide his time, rebuilding his dominance on this world by luring mortals with promises of power. Then perhaps, one day, he will be ready to plot his revenge. This world, he thinks, will behold once more, and on their knees will they weep.

But that thought is cut short.

Liliana has not come this far to watch her quarry slink away. Perhaps the demon did not see her in the blast of light, there in the cathedral yard, or perhaps he did not recognize her after so many years. But she recognized him—one of the demons who claims ownership of her soul.

Liliana abandons Thraben, her work there complete, and stalks Griselbrand to the Ashmouth. The assault at the cathedral took a lot out of her, but she knows that time is of the essence. It appears that angels and holy practitioners are suddenly on this world like a stink. And she knows the planeswalker Garruk will catch up to her eventually, if she lets him. So the time is now.

The exchange, ultimately, is brief. The demon lord is surprised to see her, and he quickly realizes how serious this reunion will be. He leads with bravado—she quickly silences him by destroying a few of his minions. She is not here for games or chit-chat. He attempts to bargain with her, offering her even more power—she sees through his lies and refuses, dead-set on releasing her soul from her contract with him. Finally Griselbrand decides it's time for this upstart to die— 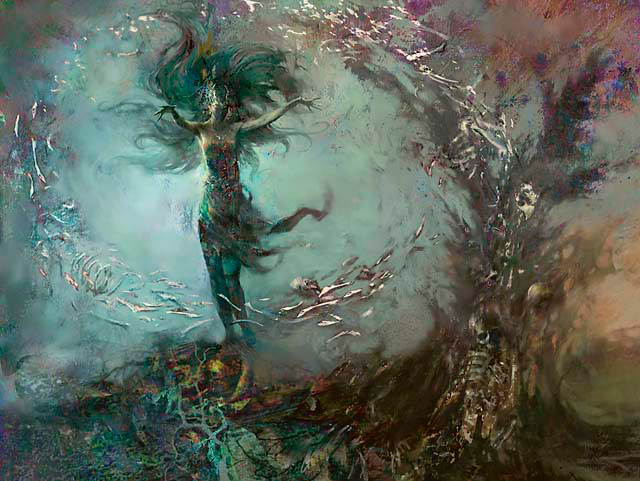 —and Liliana lets the Chain Veil fuel her spell of death. A vortex of malice erupts from her, seething with a depth of hatred she didn't know she possessed. As satisfying as it is to finally see Griselbrand perish, the feeling unnerves her, and for a fleeting moment she wonders if she will be able to control what her magic is becoming. But in that moment, she destroys Griselbrand utterly, and the deed is done.

The ground where Griselbrand stood is empty now. The sulfurous air of the Ashmouth is uncharacteristically still. A mob of minor demons move away, giving Liliana a wide berth, forming a silent circle around the planeswalker as she prepares to leave.

Across the four provinces, humans give thanks in quiet joy for the return of Avacyn. As the moon sets, villagers unbar their doors, their blessed-silver spears and angel-fuelled magics at the ready once more. Flights of angels answer the calls of the afflicted, striking back against the creatures of the night. Avacyn leads the charge, spreading her wings as if to embrace the entire plane.