When we last checked on Brawl, I talked about additional Brawl support. Today I'm happy to announce something that is part of this continued support at all levels.

But let me back up for a moment.

Ever since Brawl was announced, I've had two visions.

The first is people playing Brawl on tables around the world, both at home and at their local game stores. And this has been happening: in addition to plenty of at-home anecdotes, our data shows that the number of Brawl events being run in stores is growing over time. This is fantastic to see! While we haven't rolled out anything in-store specifically for Brawl yet, know that this is on our radar and something we're actively working on. Stay tuned!

My second vision, though, is a huge event full of people playing Brawl. A rallying point for Brawl lovers around the country and world, where you will have a large event to show off your deck, meet other Brawlers, and build the Brawl community and maybe even end up with some cool rewards in the process.

And in just a few weeks from now, that vision will be realized.

At Grand Prix Las Vegas this year, ChannelFireball Events ran a series of format championship events, like a Commander Championship and a Pauper Championship. These were incredibly popular and awesome to watch. I played in one myself!

I'm happy to say that these championship events will be returning at Grand Prix Richmond later this month, from August 30 to September 2—with Brawl as one of the featured formats!

That means it gets the whole championship treatment.

What does that entail? First, just for playing, you'll walk away with this exclusive playmat featuring Adeliz, the Cinder Wind: 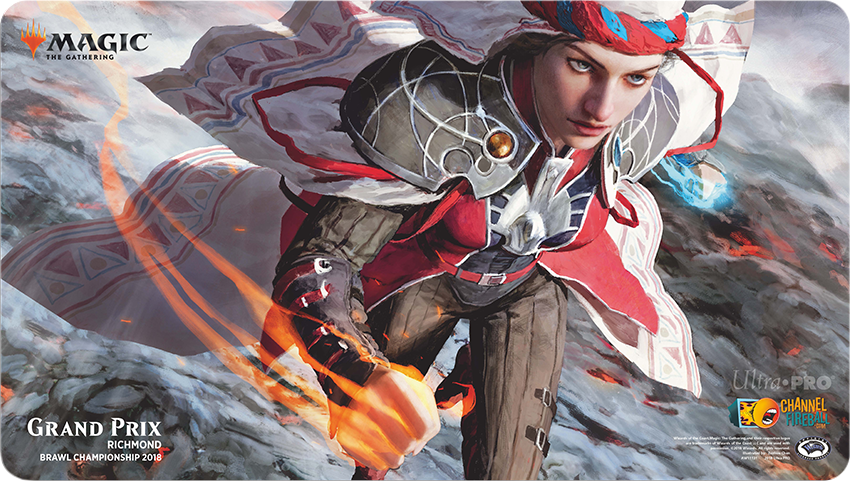 Adeliz is a legendary creature, perfect to helm your Wizard deck, and now you can get a playmat to match!

But that's not all. At the end of five rounds, there's a Top 4 playoff with a total of 2,800 prize tickets on the line between all four players—and when you consider a new booster pack is typically 10 prize tickets well, you do the math.

Most of all, the winner walks away with plenty of pride and knowing they're the best. Oh, and an exclusive Brawl Championship trophy.

And who doesn't want to win a sweet trophy?

Whether you're already a Brawl player or just curious about the format, this is absolutely worth checking out. I am so excited to see this first major Brawl event become a reality!

Curious for more details? Check out the format championships page over on the Grand Prix website for the event date and further information.

Have any questions or thoughts at all? Feel free to reach out on Twitter or Tumblr, or email me at BeyondBasicsMagic@gmail.com. I'd love to hear from you.

I'll be there in Richmond playing in the Brawl Championship, and I hope you'll join me there! If you see me at any point during the weekend, feel free to come by and say hello.

Happy brawling, and see you at the championship!