The second Magic expansion, Antiquities, was released in March 1994. The tale of Urza and Mishra represented in this 100-card set was the first story to be supported by both the functionality and flavor of the cards. 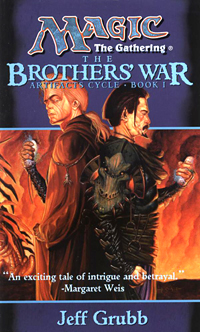 Dominarian legends speak of a mighty conflict, obscured by the mists of history. Of a conflict between the brothers Urza and Mishra for supremacy on the continent of Terisiare. Of titantic engines that scarred and twisted the very planet. Of a final battle that sank continents and shook the skies.

To learn more, go to The Brothers' War product page.

t is a time of great peril. Artifacts from an ancient people known as the Thran are being uncovered in tremendous quantities. The civilization of the past was far more advanced, warlike, and brutal, and the war machines dug up from a previous cataclysm are pressed into service. The scientists of today learn much from these relics. In the midst of this renaissance, two brothers, Urza and Mishra, discover an ancient cave. In it they find a stone that has locked away incredible evil for eons upon eons. When they touch it, it sunders, and once again Dominaria is in great danger. The two equal parts of the stone contain within them great power, and the brothers battle each other for control of them both. Their conflict spans years and eventually encompasses the entire continent of Terisiare. There struggle has come to be known as the Brothers' War, and the Thran artifacts uncovered by archeological digs are once again used for battle and destruction. Ornithopters fill the skies. Dragon engines pillage the ground, and a tremendously powerful artifact-called the Sylex-brings down destruction like the world hasn't seen for five thousand years. 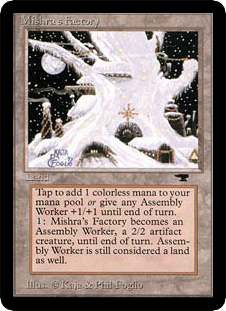