Any Time of Day Is a Good Time for Pie

ny time of day is a good time for pie. That is wisdom, folks. Some of you may recognize this as one of the many pearls of wisdom delivered in the movie Pulp Fiction. It is being delivered again today – as there has never been a better time for pie than in the wake of Planar Chaos.

The whole concept of the color pie is a part of Magic flavor as much as it is a part of Magic mechanics. “Color,” at its very root, is a character trait for every Magic card, whether it’s a “character” or not. While most color pie talk centers around which mechanics are allotted to which colors, there is definitely a link between what those mechanics are and how they are represented creatively in each of the five colors. For example, direct damage is represented differently across the five colors – lightning or fire in Red, combat tactics in White, natural defenses in Green, psionic attack in Blue, and vampiric consumption in Black.

One of the most interesting stages of Magic Creative is the concepting of cards. This is when we take the bare mechanics of a card and attach to it meaning, flavor, and world relevance. It is taking a Blue spell that deals 4 damage to a target and 2 to you and making it a mentally taxing psionic attack – Psionic Blast. Some of the most challenging cards to concept are the ones that have the same abilities as pre-existing cards, but are in a different color. Char may not have been all that difficult to nail, but it is an interesting counterpart to its Blue cousin – being a physically taxing fire attack. You can read more about card concepts in my article, “Card Concept – Who is This Unsung Hero?”

Planar Chaos is jam-packed with this sort of color twisting. The “timeshifted” cards are all old friends in new-colored garb, and some of the nontimeshifted cards are very similar to older cards, but with a color twist. Time Spiral’s nostalgia theme added another wrinkle to the concepting of these cards. Wherever possible, we also had to try and make the card concept or the new color-shifted card reminiscent of the originally-colored version. This would turn out to be difficult, because Planar Chaos would end up having a little theme of its own – sprinkling mechanics into colors that they would not normally be in, or in some cases, have never been in. It’s not easy evoking a nostalgic feeling on something that has never been done before. As if this was not hard enough already, we had to tackle all of this color-shifting without shifting the flavor of the five colors! If we were given a white counterspell (and we were) we could not change the meaning of white to say that it had become a tricky color. We would have to find a justification for countermagic in white based on white’s currently supported Color Pie theory. Ouch. This difficult task forced us to push the limits of how the five colors are represented creatively and, in my opinion, ended up yielding some really interesting flavor.

Just for fun, let’s have a look at the color-shifted cards that ended up winners.

“Those who seek to upset the balance must be taxed for such ambitions.” —Verithain, mesa high priest

I think it’s pretty cool how Mana Tithe acts as a retooled Legends card (Force Spike) by representing it as wholly white (Ha! Fun with homonyms!) and sneaking in a reference to the Mesa high priests – originally found in the flavor text of the Legends card Ivory Guardians.

This scaled and tailed version of the Weatherlight card Dwarven Thaumaturgist, was not so difficult to flavor. The card just screamed out to be a Merfolk, the staple blue weenie race in Weatherlight. The name, in addition to the card concept, was a slam dunk. So why do I cite it here? I just happen to think the flavor text is a wonderful way to make note of the card’s former redness and to place it specifically in the Weatherlight time period – by quoting a Red Weatherlight character. Tahngarth curses the “fishtails” on the cards Tolarian Serpent, Phantom Warrior, and Vodalian Illusionist as well. This is exactly how Planar Chaos timeshifted cards should be flavored – with nostalgic ties not only to the card from which they were color-shifted, but also to the card set to which their flavor is tied.

Originally titled Bloodfire Infusion, this card was not firmly settled on my faves list until we came up with a one-word name, like Pestilence, that still delivered this “disease of fiery blood” idea. Late in the game I decided to look up the root words for “fire” and “disease.” What I found was even better than that. “-hemia,” or “–haemia,” means specifically a disease of the blood. Winner! Pyrohemia, a one word name that means a disease in which the blood catches fire – and it starts with a “P” to boot! If that’s not reminiscent of Pestilence, then I am an Istvan’s uncle.

I don’t have much to say about this one except that, whenever I say the name, I say it to the tune of Pat Benatar’s “Heartbreaker.” I like to think of it as this card’s theme song, like pro wrestlers have theme songs that play when they enter the ring. I can hear it, that driving 4-4 beat that kicks it all off – and that’s about it... Groundbreaker dies at end of turn. But still, it’s all about the entrance.

I learned to appreciate the theme song from Magic Assistant Brand Manager (currently on loan to R&D) Jake Theis. His theme song is Pantera’s “Walk.” It’s hard to imagine a mightier intro than that. He told me that he has it as a ring tone on his cell phone, and that he calls himself right before he walks into a room.
RE....
SPECT....
That!

No deep story ties here, just a couple of card names that are as bold and iconic as the household names of their predecessors, Wrath of God and Giant Growth. With each of these cards I was reeaaally picky with the names. I wanted names that conveyed the simplicity and power of the originals. Things were looking bleak until late in the game when the power of a fresh perspective saved the day. Names and Flavor Text writing newbie Christa Knott-Dufresne pulled both of these out of her shiny new hat. I immediately rejoiced when I saw them. Damnation, in particular, warmed my heart.

From the start I knew that I wanted this card name to carry the divine weight of “wrath of god” along with its implication of awesome power. Of course, the “Wrath of ______” submissions were many, and they all just seemed wrong to me. “Wrath of the Demon” or “Devil’s Wrath” felt like cop-outs. I wanted something that could have just as easily come from a Jonathan Edwards fire-and-brimstone sermon as “Wrath of God.” Damnation hits this on every conceivable level. Just awesome. Brute Force is kick-ass too. Though the words “Giant Growth” mean little to folks outside of Magic, it still has an iconic feel that I wanted to convey in the “Red Giant Growth” as well. Christa’s Brute Force does this superbly, and it also tilts the concept of added power and toughness away from growth, a green characteristic, and toward rage, undoubtedly red. A+ names all around. (And the art for Damnation is powerful in its simplicity too. The Orzhov would be proud to call it their own.)

This card concept was a tough one. Redirecting damage is, on some level, preventing damage. I can think of few things that are less black than that. But there it was, “All damage that would be dealt this turn to target creature you control by a source of your choice is dealt to another target creature instead.” So what is it that could be black about this ability? Forcing someone to suffer for you seems oppressive enough for black. But how could this be justified on a card from a set in which a whole race of WHITE creatures does this very thing? It would be strange to see one random black card doing it too. That’s when we had to really dig in to Planar Chaos’s “alternate reality” theme. (Wow, so many themes... so many masters to serve in Time Spiral block. My back aches from bowing down.) If the Kor were going to be white and black, something crazy had to go down, something had to force the noble Kor to give up their secrets. That something is the ascending of a cat warrior to the evincar’s throne in Rath. This story is explained in more detail in my article “Time Twists and Destinies Interchange.” In this alternate Tempest storyline, some of the Kor are dominated by the new evincar, and their secrets made her own. Thus, the solemn chant of the Kor Chant becomes the Kor Dirge, a grating ritual in which the suffering is forced upon the innocent by a sinister feline vampire. On the Vorthos scale, this card is about as heavy as it gets. One would have to be a turbo-Vorthos, and a sharp one at that, to have understood all the story implications of this card without a little help from magicthegathering.com. If you did, then I bow down to you too – ouch, my back! 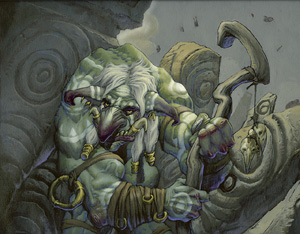 Hedge Troll is a real crowd pleaser. The phonetic nod to Sedge Troll is enough to float the entire boat, but the coolness goes deeper than that. The flavor text is a deft rework of the original, with the added bonus of making sense of the color change both mechanically and creatively. Here’s the Sedge Troll flavor text, followed by Hedge Troll’s.

The stench in the hovel was overpowering; something loathsome was cooking. Occasionally something surfaced in the thick paste, but my host would casually push it down before I could make out what it was.

His abode was clean and bare, not a morsel in sight. I asked him what he ate, fearing the answer. He smiled and said his faith alone sustained him.

So Sedge Troll was a dastardly creature, feeding his regenerative powers by eating the poor folks he had stuck in his stew. Black and green have always had regenerating creatures, but what to do with a green guy who regenerates with a white ability? “Seek the answer within, my son.” So says the troll of the hedge. Fasting and faith, friends, are what power the Hedge Troll. I am still impressed by this piece – pulling it all together and doing so in a smooth, nostalgic fashion.

And that’ll do it for dessert this week. Or was it dinner? Supper? Elevenses? Whatever time it is in your neck of the woods, it’s a good time for pie.