It was a long time ago at the Pittsburgh Comic Con that I got my first look at Fourth Edition. My friend John and I attended to meet some of the great comic book artists of the time, find some of the back issues we had missed, and play a little Magic. There were hundreds of dealers at the con. Most of them were hocking comic books, some specializing in Silver or Golden Age books, most in the more modern variety. There were also some young independent writers and artists present trying to break into the industry. Over half of the booths, however, also sported an assortment of Magic cards.

When I started playing Magic, Revised Edition was the core set at the time. My friends and I never got to open packs of Alpha, Beta, or Unlimited Edition, but we had more than our fair share of Revised. We marveled over the older cards we came across in magazines and in the deal cases at various shows and tournaments. We all started playing right around the time that Legends was about to be introduced. There were lots of cards from Antiquities and Arabian Nights that we had never seen, along with those that had been removed from Unlimited. There were even a lot of cards from Legends that none of us ever got to see because they were all so hard to find.

That is exactly why we were all so excited to find out that Revised would be going away and a new core set would take its place. Fourth Edition was an opportunity for all of us to get our hands on a lot of the cards that we had only read about and had never actually seen.

As we explored the Comic Con, we spent a lot of time looking at all of the dealers’ selections of Fourth Edition cards. What was in, what old favorites had gone away? I remember thinking Demonic Tutor, Sol Ring, and Channel all had to be out because these cards were all restricted to one per deck, so why would they be reprinted if they were deemed too good? But, to my surprise, Channel was still around.

The most amazing card I discovered that first day of the con was Time Elemental. A 0/2 creature for three mana that let you put a card from play back into its owner’s hand. Amazing! I had to get my hands on four of these guys.

The Basics of Core Sets

As Magic evolved, the role of the core set changed. The core set became a tool to introduce new players into the word of Magic. Today, we have cool starter sets that contain everything a new player needs to start playing Magic (O.K., not everything—you have to supply your own opponent, but really, that is just because he wouldn’t fit in the box).

Since the core set is the way new players begin exploring the game, the cards in the core set are generally pretty simple. There is no reason that a new player should be expected to figure out when a madness trigger resolves or how to stack storm spell copies, at least not for the first week or so. Heck, until recently, even trample was considered too complicated to explain to a newbie, but Force of Nature is just too cool to keep out of the core set.

Where Do All The Cool Cards Go?

Still, if the core set is the primary vessel for cards to be reprinted for future generations of Magic players, how are modern players ever going to learn about things like buyback, storm, flashback, echo, cumulative upkeep (props to Coldsnap for the assist), phasing, madness, entwine, rampage, cycling, banding (yeah, I said it, I like banding, I even like bands with other—I don’t completely understand it, but I like it…), soulshift, substance (no, there have been no cards printed with this ability that I know of, yet), splice, landhome, affinity, morph, haste (wait, that is in the Core Set), kicker, all the cool guild abilities from Ravnica, threshold, and all the others. Occasionally, an old ability may reappear in a new set, but there are too many new abilities out there yet to be discovered to bring all the old ones back. Or are there?

A rip in time in Dominaria may be able to bring many of these abilities together again. Time Spiral, due out on October 6, is the latest expansion for Magic. It promises to bring many characters and cards from previous sets back for a second go around. New and old cards with some of the best abilities that have been designed wait over the horizon. This is a chance to get all of the great cards from past expansions that are too complicated to reprint in the core set back and into the hands of new players.

Imagine all of your favorite cards from the past 10 years all in one set. That is what Time Spiral promises. I am currently eagerly awaiting an email from Wizards of the Coast with one of the cards in Time Spiral attached to it. I don’t know if it will be an old card, a new card, or a new card with an old ability. I haven’t been this filled with anticipation about a new set since Chronicles reprinted many of the most powerful cards from Magic’s first couple years. Best of all, once I get the email, I get to share this new card with everyone in the Magic community (a.k.a. Ya’ll, which is West Virginia speak for “all of you”)!

Hey, you didn’t miss anything yet; I am still waiting on that email. Can’t wait to see one of the cards from the new set. It might be a big creature from days past like Akroma, Angel of Wrath or some new time-bending spell that’s better than Time Walk. Only time and an email will tell.

Patience is a virtue; I’m not sure who said that, but I am sure he or she was right. Maybe Time Vault will be the card I get to reveal. That is one of my all-time favorite cards, and even though it isn’t that powerful with the new oracle wording, it is still really strong. I remember when it received errata and was removed from the banned list. I went out and got a beta version. One of the best cards in my whole collection.

Still no email; no problem, the article isn’t due till tomorrow. That leaves plenty of time to speculate. Maybe it will be a new card with buyback. I always liked that ability. It would have been even more amazing if Tempest block weren’t so darn fast. Or maybe one of the crewmembers from the Weatherlight will be back. Mirri died, but if time is all screwed up, she could be back.

My next Netflix movies have been sent out! That’s something, at least. I saw one of the cards already previewed was Mirsha! Maybe I will get to tell you about a Legend named Urza! That would be cool. Heck, I would be happy just to tell you his glasses would be in the set. “Glasses of Urza will be in Time Spiral!” Why not, that is a card with some old school flavor. I remember playing those all the time way back when. Well, no preview card yet.

No card yet, but it is time for dinner. That is something to look forward to. My girlfriend Bethann and I are meeting our friend Elliott for dinner. I will pick his brain for info on Time Spiral. He reads everything there is about Magic Online. He probably knows way more about the new set than I do already.

The Next Day At Work

Success! Here it is, the card you have all been waiting to see. By the way, if you actually read this whole thing instead of just skipping ahead to the card, kudos to you!

Living End, it’s one of the cool new cards with the suspend ability. A card with suspend doesn’t resolve like a normal spell—it has to wait a few turns. When you pay its suspend cost, you remove it from the game and put counters on it equal to the number after suspend (three in the case of Living End). Each upkeep, the card loses a counter. Once there are no counters left, you can play the spell. The suspend ability on this card can be viewed as a benefit since it gives you a chance to go ahead and spend mana now and then take three turns to set the board to maximize the benefit you will get out of the spell. 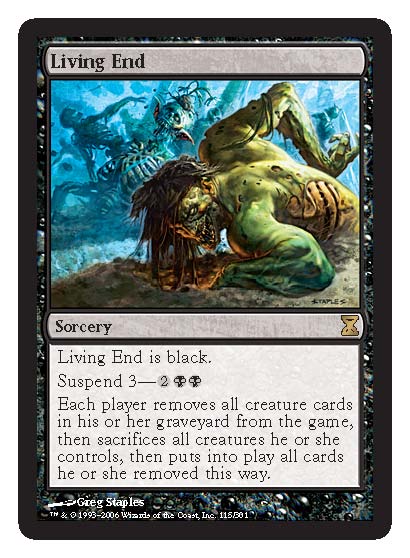 Now I am even more excited about seeing all the other great cards from the new set. I have a long list of old favorites I am hoping to see back as well. I hope you see all of your old favorites too!