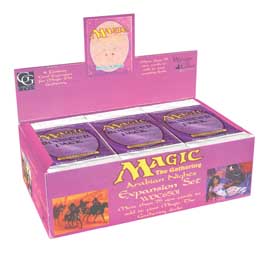 There are 78 unique cards in Arabian Nights, broken down as follows: 26 commons, 51 uncommons, and one basic land (a Mountain). The commons and uncommons appear at different frequencies.

In addition, 14 of the commons were printed in two subtle variations (called "a" and "b"), causing some collectors to view the set as actually containing 92 cards.

Arabian Nights debuted many new game mechanics, several of which have made a lasting impact on Magic. Highlights include:

Mark Rosewater details all of the set's groundbreaking cards in this article.

his is where it all began.

Released in December 1993, five months after the release of the basic game, Arabian Nights was the first expansion for Magic: The Gathering. The flavor of the cards was based on the characters, stories, and objects in the classic Middle Eastern tales, 1001 Arabian Nights.

With this set, players can relive the tales of Sindbad and Aladdin, battle powerful djinns and efreets, and journey to strange lands like the Island of Wak-Wak and the Diamond Valley.

Featuring some of the most powerful cards ever printed, like Library of Alexandria and Juzam Djinn, Arabian Nights was a fitting beginning to the long tradition that is Magic: The Gathering expansion sets. 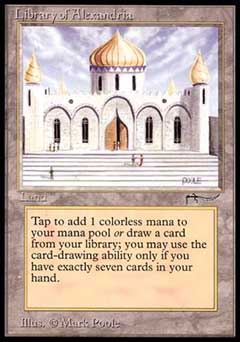